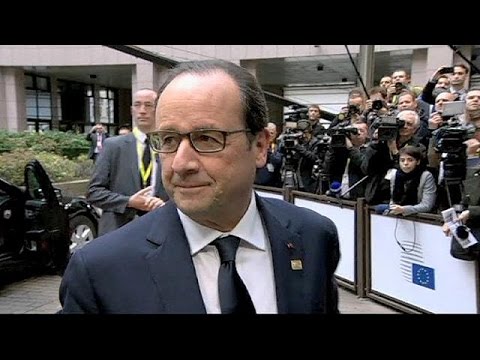 The European Union climate summit has agreed to cut emissions by 40% by 2030, after hard bargaining by Poland and the UK failed to derail an agreement.

The 28 nations of the EU also agreed to improve energy efficiency by 27% over the next decade and a half, and to ensure a continent-wide proportion of at least 27% renewable energy market share.

In contrast, the production of carbon dioxide in the US increased in 2013, from roughly by 2.5 percent at a time when scientists are frantically signaling the need to significantly reduce that output. The US produces about 5.5 billion metric tons of CO2 a year. In 2014, the world crossed the symbolic barrier of 400 parts per million of CO2 in the atmosphere, up from 270 in preindustrial times. Archeological examination of ice cores that show past atmospheric composition demonstrates that such high levels of CO2 in prehistoric times (then caused by volcanic activity rather than human) were correlated with higher sea levels and a third less land area, with megastorms, and with tropical climates throughout the planet.

US capitalism trumpets itself as efficient and agile, able better to deal with social and political crises than government policy because of the magic of the market. But the structures of markets are themselves produced by government policy, which plutocrats in the US have bought. In fact, US capitalism is acting like an ostrich, hiding from the biggest social and economic crisis — rapid human-caused global warming– that the human species has ever faced.

The Guardian notes that Tony Robson, the CEO of Knauf Insulation, complains that an increase of 27% in energy efficiency over 15 years is just about what people are doing anyway in Europe, where fuel prices are typically higher than in the US. So that isn’t exactly taking climate change as an emergency.

A goal of 27% renewables by 2030 is also not very ambitious. Renewables (including wind, solar and hydroelectric) have produced nearly 28% of Germany electricity this year, and German goals are far more ambitious than the EU overall. Renewables produced 42% of Spain’s electricity in 2013 and it reduced its carbon emissions by nearly a quarter.

Why are even center-right governments in Europe so much better at this than is the United States?

Europe is less politically corrupt. Although corporations play a big role in politics in Europe, private money is much less influential. In the US, we are to the point where it is all right for our politicians to be bought and sold sort of like slaves, and where 400 or so billionaires are the ones doing the buying and selling. If you are an American taxpayer and you think John Boehner represents you, you have another think coming. Big oil and big coal can just purchase speeches on the floor of the House that would be laughed off the stage in Europe, and European journalists are far more ready to ridicule flat-earth claims like climate change denialism.

Europe isn’t perfect. Poland’s coal addiction watered down the summit’s achievement (Poland would actually make money going into wind and solar instead of coal over the next 15 years, but coal mining owners and workers are vetoing economic common sense). And small businesses are afraid of higher energy costs (in fact, renewables are at grid parity in most of Europe). Also, Europe is afraid that China, India and other nations with already-lower labor costs will drag their feet on moving to renewables, leaving Europe less competitive in industrial production and exports.

And some of the impetus to reform comes from geopolitical considerations. Europe is not happy at being so beholden to Russia for natural gas, especially given Vladimir Putin’s thuggish behavior over it and the Ukraine/ Crimea crises. Russia supplies about 1/3 of European natural gas. Qatar is also a big player in that market and some European states are viewing it with increased unease because of its alleged backing for Muslim radicals in Syria and Libya.

But for all these powerful considerations, the EU was able to set significant carbon reduction goals, and many European countries have demonstrable avoided the production of billions of metric tons of carbon dioxide over the past decade– CO2 that would have warmed the earth even faster and produced even more climate disruption– disruption that will cost far more than the $100 bn the German consumers have paid since 2000 for the push for renewables. (At 82 million Germans over 14 years, it isn’t really even that much money– $82 a year per capita or so, less than most Americans spend on lattes).

In the meantime, US emissions are the biggest per capita of any major industrialized country and after a fall because of increased wind energy and a turn to natural gas, went back up last year.