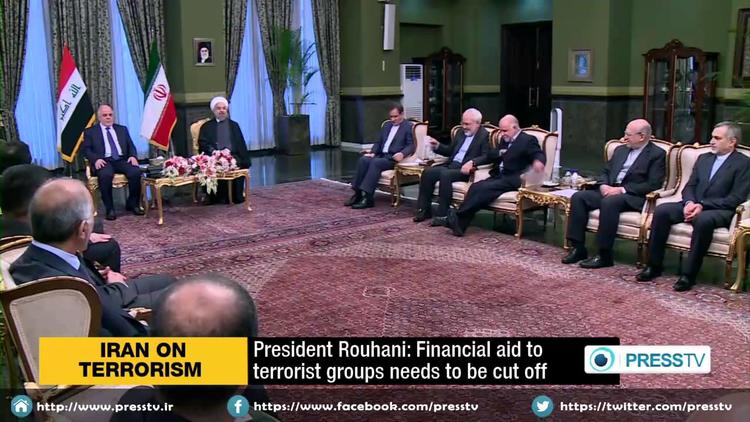 al-Zaman [The Times of Baghdad] reports that Iranian President Hassan Rouhani has proposed to visiting Iraqi Prime Minister Haydar al-Abadi an anti-ISIL axis including Syria, Lebanon, and Iraq that would be led by Iran, as an alternative to the US-led coalition proposed by President Barack Obama. In essence, this is the same kind of support Iran offers Bashar al-Assad in Syria against ISIL and al-Qaeda affiliates there (as well as against the Free Syrian Army).

Al-Zaman’s sources maintain that al-Abadi was extremely annoyed by the openly anti-Western public pronouncements of Iranian officials and Revolutionary Guards commanders. The whole point of his repeated rejection of foreign ground troops in Iraq the previous day (after a visit to Grand Ayatollah Ali Sistani in the Iraqi holy city of Najaf) was to avoid such criticism from Iran.

Iran provides Iraq with electricity, given that Iraq’s energy infrastructure is still being rebuilt, and officials in Tehran said that that agreement would be renewed, but that Iraq had agreed to pay more per kilowatt. Iraq also agreed to buy $30 billion in Iranian goods next year, including weaponry and logistical equipment. Iran is under US and UN sanctions and needs to expand its trade, and Iraq is one country the US won’t pressure over trade with Iran because it is understood that Baghdad needs good economic relations with its neighbor to the east if the al-Abadi government is to survive.

Al-Abadi, a fervent Shiite and member of the fundamentalist Da’wa (Islamic Call or Islamic Mission Party), also met with Iranian supreme leader Ali Khamenei and is said to much appreciate Iran’s help against ISIL.

At the same time, US and coalition fighter jets continued to fly missions against ISIL on behalf of Baghdad.

Another source of friction between Baghdad and Tehran, al-Zaman says, is that some of the Shiite Iraqi army officers who abandoned their posts in Mosul in the face of the ISIL advance are known to be close to Iran, and al-Abadi’s new Sunni minister of defense is already making noises about punishing and purging them.