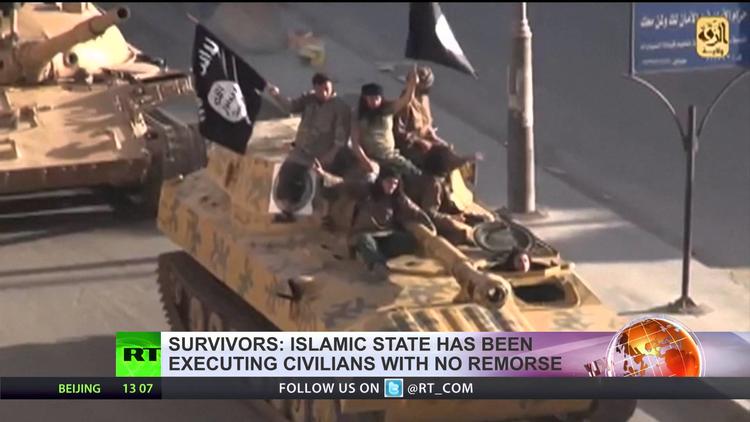 DUBAI (IRIN) – The international outcry to the openly advertised atrocities committed in Iraq by the jihadist group calling itself Islamic State (IS, formerly ISIS or ISIL) has led to calls for investigations and punishment, with US President Barak Obama saying “justice will be done” after the killing of journalist James Foley.

This has provoked a direct reaction in terms of air strikes by the US, and the assembling of an international coalition to fight the group. But beyond this rough military “justice”, what mechanisms exist to turn investigations into court cases that formally bring IS leaders to account? What exact crimes are IS fighters committing, and perhaps more crucially, what chance is there that the group’s fighters will be held to account?


Who is carrying out investigations?

Several teams of investigators are reportedly looking into evidence of atrocities, including the International Commission of Inquiry for Syria, a UK government-supported investigation team (covering Syria), and proposals are being considered in Washington and London for an Erbil-based IS investigation team.

Separately, on 1 September, the UN Human Rights Council agreed to send an 11-member investigations team to Iraq, a decision that came just days after it published a report (27 August 2014) linking ISIS members to mass atrocities and acts “amounting to crimes against humanity” in Syria in the first half of the year.

What crimes are we talking about?

Many of these atrocities – openly advertised by the group on the Internet – would be against the Iraqi legal code, which continues to be served by functional criminal courts (in government-controlled areas). Though IS may claim otherwise, most would accept that the alleged crimes are taking place on Iraqi territory normally under the jurisdiction of Iraqi law.

However, with IS controlling around a third of the country, national investigations or prosecutions are not realistic for the moment. And, with Iraq currently in a state of armed conflict, certain violent acts that are forbidden during peacetime become permitted under international law, so IS lawyers could claim that peacetime rules no longer apply.


What about war crimes?

It has become increasingly commonplace to accuse IS of war crimes: global crimes which are technically defined as serious violations of International Humanitarian Law (IHL) – sometimes known as the law of armed conflict. As an example, on 2 September, Amnesty International published a briefing paper entitled Ethnic Cleansing on a Historic Scale, accusing the group of war crimes as well as other atrocities.

The rules of war are set out in instruments such as the four Geneva Conventions (1949) and the two Additional Protocols (1977), and in customary practice.

For IHL to apply, the violence needs to be legally considered as either an international or non-international armed conflict, technical categories that assessments by the International Committee of the Red Cross (ICRC) go a long way to establish.

According to ICRC, there is a current non-international armed conflict in Syria (in laymen’s terms, a civil war), which means a range of violent acts in the country, even away from the frontlines, may be counted as war crimes.

The laws apply to the conduct of IS forces, and provide for protection to civilians under their care, whether IS accept the rules or not. Without this legal recognition of the armed conflict (as opposed to other types of violence), war crimes prosecutions would not be possible.

In neighbouring Syria where IS also operates, ICRC made public for the first time in July 2012 that it judged the situation an internal armed conflict, meaning IHL applied to regime forces and IS activities there.

Such judgments are based on two criteria – the intensity of the fighting and also whether the parties to the conflict are organized groups.

The last 12 months have seen IS evolving from a loosely organized military group, to a would-be state-builder. This has lifted IS above the sort of lower level terrorist activity elsewhere in the world.

There is an undoubted (and growing) international element to the fighting. IS territory straddles significant parts of both Iraq and Syria, where it is fighting against both governments, as well as more recently, an international US-led coalition involving more than 50 countries. However, at least in ICRC terms, despite being internationalized, the conflict would not be considered international until it involved recognized states on both sides.

Beyond war crimes, the group’s fighters would also have a good chance of facing accusations of crimes against humanity, such as ethnic/religious cleansing, and even genocide, given the apparent attempts to wipe out communities like the Yazidis. The 1998 Rome Statute defines crimes against humanity as “odious offenses in that they constitute a serious attack on human dignity or grave humiliation or a degradation of one or more human beings” which “are part of a widespread or systematic practice”.


But will the crimes be prosecuted?

The investigation work going on is obviously not meant to be an end in itself. The work of bodies like the Syria Commission of Inquiry, the UN Human Rights Council, Western-government supported teams and human rights group like Amnesty and Human Rights Watch could all provide the material needed to establish atrocities in court, and importantly the links between reprehensible acts and those at the top of IS’s command structure, most notably the self-appointed Caliph, Abu Bakr al-Baghdadi.

The challenge of a prosecution team would be to establish a connection of culpability between leading commanders and the atrocities committed by their subordinates. Past experience has been that although the conflict period is crucial for collecting evidence, the slow process of prosecutions generally needs to wait until after the conflict has finished.

The investigations will provide not just the case material for trials, but the impetus for them as well: Under the principle of universal jurisdiction state signatories have a duty to prosecute grave breaches of IHL even if they did not take place on their territory or involve their citizens.

For some countries though, prosecutions will very much involve their own citizens, given the international make-up of IS forces, with estimates of up to 11,000 foreign fighters from at least 74 countries.

In the UK, London mayor Boris Johnson proposed jihadi fighters (not necessarily with IS) be presumed guilty until proved innocent, and the government is concerned that British jihadists returning from Syria/Iraq will carry out terrorist attacks.

Prosecutions would be under anti-terrorism offences (e.g. travelling abroad to plan or commit terrorist acts) rather than related to specific atrocities under IHL. The majority of Western fighters with IS are thought to be focused on menial tasks because of their lack of military and religious education, although a British citizen does seem to have played a prominent role in the beheading videos of Foley and other foreigners.


How about the International Criminal Court?

The International Criminal Court (ICC) would be the most obvious place for prosecutions. Not yet two decades old and still finding its feet, it has a mandate to prosecute war crimes, genocide, crimes against humanity and crimes of aggression.

But neither Iraq nor Syria has signed up, meaning an investigation would require a referral from the UN Security Council. In 1998, when the Rome Statute setting up the ICC was adopted, Iraq was one of only seven countries (including USA) to vote against. Neighbouring Syria signed the statute on 29 November 2000, but has yet to ratify it.

Nevertheless, in Iraq the ICC prosecutor did initially open preliminary investigations – allowed where crimes potentially involved citizens of states that have accepted the jurisdiction of the court. These investigations were closed on 9 February 2006 because a lack of sufficient evidence, but then reopened on 14 May 2014, although reopened investigations seem to concern allegations against British officials rather than IS.

Former UN prosecutor Carla del Ponte has called for the situation in Syria to be referred to the ICC, but this was vetoed by China and Russia in May 2014. The court has yet to launch full investigations into any situation outside Africa.

In some ways, a case against IS would echo one of the ICC’s earliest cases: that against the leaders of the Lord’s Resistance Army in northern Uganda, which committed (and continues to commit) horrific acts of terror against civilians in the region. Leader Joseph Kony is accused of war crimes and crimes against humanity, though is still at large. Investigators may also follow up on allegations of atrocities committed by non-IS forces, including state forces in both Iraq and Syria.

Given that neither Iraq nor Syria have formally signed up to the ICC, ad hoc courts might be another solution. Iraq notably set-up its own Supreme Iraqi Criminal Tribunal to try a similar series of crimes (committed by Iraqis between 1968 and 2003). National courts are generally less remote, bringing a greater visibility and proximity to trials.

Other recent precedents, this time established by the UN (either alone or with states), include the International Tribunals for Rwanda and the former Yugoslavia, the Special Court for Sierra Leone, the Extraordinary Chambers in the Courts of Cambodia for Khmer Rouge crimes and the Special Tribunal for Lebanon.


Would it be worth it?

Although hugely expensive and long, prosecutions could help to expose and delegitimize IS and perhaps even act as a deterrent to others. Prosecutions seem a long way off, and perhaps unrealistic, but this is a young and developing field and cases frequently look unrealistic when first tabled.

Mirrored from The Integrated Regional Information Networks (IRIN), the humanitarian news and analysis service of the United Nations Office for the Coordination of Humanitarian Affairs