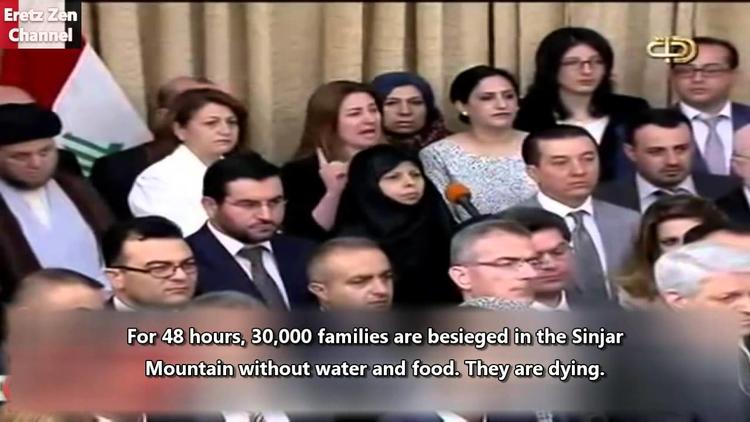 By Freshta Jalalzai and  Luke Johnson via RFE/RL

Iraq's only ethnic Yazidi member of parliament says that the human rights situation in her country is "deteriorating," with Islamic State (IS) militants kidnapping, raping, and selling Yazidi women.

"They are still without any shelter. They are sleeping on the streets. The situation is not good and the winter is [advancing], and it's raining, actually, in Iraq [now]. So the situation is deteriorating," legislator Vian Dakhil told RFE/RL in an October 8 telephone interview from Iraq's Kurdish region.

Dakhil, who has been cited by U.S. President Barack Obama, was named the winner of the 2014 Anna Politkovskaya Award on October 6 by the organization Reach All Women in War. The award, named after the murdered Russian journalist, honors women working to help those trapped in conflict.

The lawmaker, who is currently recovering from injuries she suffered in an August 12 helicopter crash on Mount Sinjar in northern Iraq, said that while IS militants have forced Christian women from their homes, Yazidi women often suffer worse fates.

"Only Yazidi women are kidnapped. We don't know, actually, why exactly the Yazidi women [are targeted]," she said.

Dakhil says that of the more than 500,000 Yazidis in Iraq, some 25,000 Yazidi girls have been abducted by IS militants.

"We don't know exactly [where all of them are], but some are [kept] at [various] prisons here, still in Iraq, and some have been taken to Syria, and some are in Mosul," she said. "They are taken to be raped, and they are selling them — $150 for a girl."

Dakhil called on the international community to step in to help the plight of the Kurdish religious and ethnic minority that has faced religious persecution for centuries and that has been dubbed "devil worshippers" by some Muslims.

"I ask every government — not only here — to take some action to save these people here because the situation is really bad. What is happening here cannot be solved by [the] Iraqi government only," she said.

Dakhil gained international attention in August after making an impassioned plea to the Iraqi parliament about Yazidis trapped on Mount Sinjar, which was surrounded at the time by IS militants. She called it genocide.

"My family is being butchered, just like all Iraqis are being killed. … And today, the Yazidis are being slaughtered. Brothers, away from all the political disputes, we want humanitarian solidarity. I am speaking here in the name of humanity. Save us! Save us!" she told lawmakers on August 5.

The speaker of parliament interrupted her speech, while others shushed her emotional address, after which she collapsed.

The speech caught the attention of the U.S. president, who referenced her on August 7 when announcing U.S. air strikes against IS militants and a humanitarian aid effort to rescue the Yazidis.

"Earlier this week, one Iraqi in the area cried to the world, ‘There is no one coming to help.’ Well today, America is coming to help," Obama said.

'What Would You Feel?'

Dakhil broke both legs and several ribs in an August 12 helicopter crash on Mount Sinjar. The pilot of the aircraft, which was carrying about 35 people, was killed in the accident, while "New York Times" reporter Alissa Rubin was injured.

Dakhil said that she plans to return to parliament once she is fully healed.

A Yazidi girl fleeing violence in the Iraqi town of Sinjar rests at the Iraqi-Syrian border crossing in mid-August.

She also asked Western Muslim women who are supporting IS militants — an estimated 30 of whom have actually traveled to Iraq or Syria — to look at what the group, which is also known as ISIL, is doing to Yazidi women.

"Every girl [in the West] who is supporting ISIL should put herself in any [local] girl's [shoes] and see what she has gone through. Twelve-year-old girls [are being] raped. Ten-year-old girls [are being] raped. I would like to ask [women supporting ISIL], if she was in their situation, what would she feel? If she was from your family, what would you feel?" Dakhil said.

UNICEF: “Uprooted Yazidis must be allowed to return home”