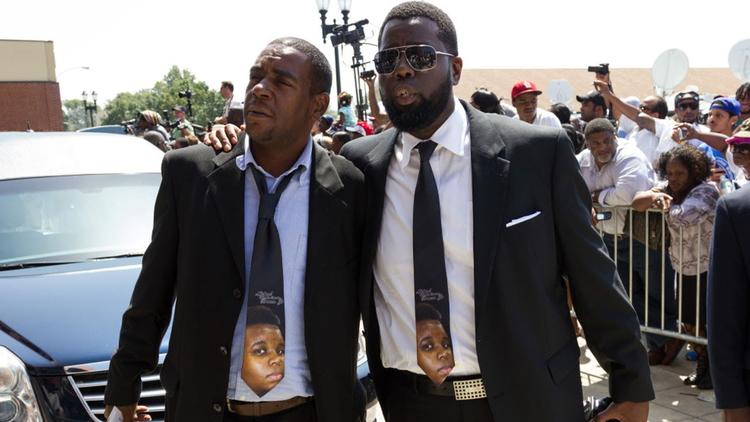 By Peter Bloom, The Open University (The Conversation)

The decision not to charge police officer Darren Wilson with the unlawful shooting of unarmed teen Michael Brown has reignited protests across the US. The judgment was met by violent outrage on the streets of Ferguson.

After months of deliberation, a grand jury ruled that there was “insufficient evidence” to convict Wilson of acting illegally. At the heart of the controversy is whether this incident was motivated by racism or the officer’s “reasonable fear” for his life. American law enforcement officials are permitted to use deadly force when their safety is perceived to be in mortal danger. Opponents charge, however, that this shooting had little to do with fear and everything to do with the unjust racial profiling by police.

These are not mutually exclusive. The public stereotyping of black American males still justifies the use of lethal force against them by authorities at increasingly alarming levels. And as long as racial fear can be used to justify that force, killings like that of Brown will continue.

Racial fearmongering has long been used to legitimise violence against African-Americans. Before the civil war, black slaves were commonly depicted as savages who needed to be tamed by the white race. In the late 19th and early 20th centuries in particular, an image of blacks as sex-crazed threats to white moral decency was used to justify their lynching and the rise of white supremacist terrorist groups like the Ku Klux Klan.

In today’s America, racial fear is most obviously manifest in the widely held stereotype of African-American males as dangerous criminals. The image of the “violent thug” terrorising the inner city and increasingly the suburbs remains a strong.

It is this fearful representation that has helped to legitimise the government’s war on drugs that has disproportionately targeted black communities and led to the incarceration of African-Americans at a staggeringly disproportionate rate.

It is not surprising, then, that police officers would “instinctually” have a heightened fear for their safety when confronted by a black suspect. This is not just their individual racism coming into play. Instead it is the result of years of social conditioning to see blacks as “dangerous”. In the words of one expert: “The fact of the matter is that whiteness presumes innocence and blackness presumes guilt, and you have to prove yourself otherwise.”

This purportedly “reasonable” fear of African-Americans makes them especially vulnerable to aggressive and often lethal policing tactics. These tactics are needed, police argue, to effectively deal with “thugs” whose lifestyle is supposedly defined by the use and celebration of violence. Otherwise innocuous fashion choices – hoodies and low-slung jeans – become coded as warnings that people should fear for their safety.

The infamous 2012 shooting of 17-year-old Trayvon Martin by George Zimmerman is a case in point.

Not surprisingly, the parents of Trayvon Martin have supported the Ferguson movement, saying publicly that the officer “should be held accountable” and even visiting the Brown family and protestors in Missouri.

In the case of Ferguson, much has been made of the fact that the vast majority of the town’s police force is white, while the vast majority of its citizens are black. It’s also been reported that more than 90% of all arrests in Ferguson are of black people – despite evidence that they are less likely to be carrying contraband, for instance, than white citizens.

Tellingly, in the immediate aftermath of the shooting, the Ferguson police made an ill-planned attempt to depict Brown, who had just graduated from high school and was headed to college, as a “typically” dangerous black youth. They released a video showing him appearing to steal an item from a local shop where he briefly fought with the store owner.

The police were widely criticised for taking the time-honoured approach of demonising their black male victim as “dangerous” to imply he somehow “deserved” his violent end. And yet, the strategy has not only persisted; it’s been extended to the protesters now taking to the streets of Ferguson.

What started out as peaceful demonstrations in August 2014 soon turned violent when riot police armed with military-grade weapons began attacking the protesters.

According to an Amnesty report, police met protesters “using armored vehicles which are more commonly seen in a conflict zone rather than the streets of a suburban town in the United States”.

This echoed video footage of police taunting the crowd. One CNN video showed an officer saying to the protesters: “Bring it you fucking animals! Bring it!”

Some sections of mainstream US media, however, have largely blamed the protesters for the violence, depicting them as an angry black mob creating “chaos” who the authorities were acting appropriately in aggressively putting them down.

Equally, the Ferguson protesters made much of another example of the racial double-standard: a violent riot among mostly white individuals intoxicated after a “pumpkin fest” in New Hampshire, which was widely depicted as merely being “rowdy” and chaotic despite the fact that police used tear gas to shut it down.

Now, instead of talking to the media, the Ferguson protesters are increasingly relying on social media outlets to get their message out and present themselves as constructively fighting for justice. As one woman who went to the protests to observe what it was like for herself first hand, put it:

They (the media) totally took advantage of stereotypes about race and making any black person that shared emotion seem violent. They painted all these protests to be violent mobs of people terrorising, and that’s absolutely not the experience I had.

In response to the police’s racial stereotyping, a national twitter campaign has begun, with the hashtag #IfTheyGunnedMeDown.

Black men in particular have used the feed as a forum to post everyday pictures of themselves next to ones that could be misused to portray them as “thugs” (for instance holding a fake gun at a costume party).

After the jury’s decision on November 24, the first concern of the authorities was to make sure the protesters didn’t engage in widespread violence. This masks the broader message being promoted by those in the movement, one they expressed in an open letter in the aftermath of the ruling:

This fight for the dignity of our people, for the importance of our lives, for the protection of our children is one that did not begin Michael’s murder and will not end with this announcement. The “system” you have told us to rely on has kept us on the margins of society … housed us in her worst homes, educated our children in her worst schools, locked up our men at disproportionate rates and shamed our women for receiving the support they need to be our mothers

To end this cycle of violence and preserve the dignity of black lives, we have to end the stereotype of the “dangerous” and “violent” black threat. Until then, as Ferguson has so tragically shown, American racism will continue to make the fear and killing of blacks seem “reasonable”.

Peter Bloom is a Lecturer in Organisation Studies, Department of People and Organisation at The Open University

Peter Bloom does not work for, consult to, own shares in or receive funding from any company or organisation that would benefit from this article, and has no relevant affiliations.