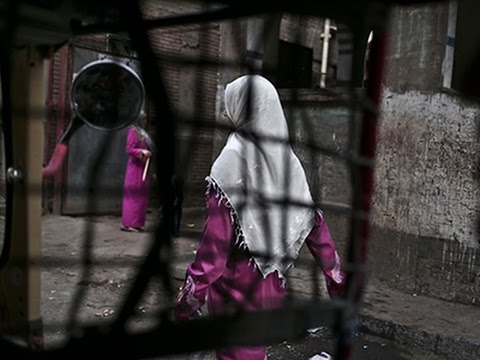 A trial this month in Egypt centered on the death of a 13-year-old girl in 2013. The doctor who cut the girl and the girl’s father who took her to the doctor were acquitted on November 20. The case highlights the need for serious steps by authorities to end FGM including implementation of the law and a national strategy to raise awareness of the harms of FGM. The public prosecution recently filed an appeal against the acquittal.

“Female genital mutilation is banned in Egypt but the practice continues possibly because there is a lack of investigations, prosecutions, and convictions,” said Rothna Begum, researcher on women’s rights in the Middle East and North Africa for Human Rights Watch.

FGM involves the partial or total removal of the external female genitalia for non-medical purposes. It interferes with the natural functioning of the body and has no known health benefits. The practice may lead to a variety of immediate and long-term health consequences, including severe pain, shock, infection, complications during childbirth affecting both the mother and the child being born, as well as long-term gynecological problems.

On June 6, 2013, 13-year-old Sohair al-Batea died following an FGM procedure after she had an allergic reaction to penicillin. Dr. Raslan Fadl Hallawa acknowledged performing the procedure, but claimed it was for medical purposes and not FGM.  He and Sohair al-Batea’s father came under investigation. The public prosecutor initiated criminal proceedings in March 2014 charging the doctor with manslaughter for causing the girl’s death by negligence, running a medical facility that does not meet medical requirements to treat patients, endangering the girl’s life, and committing the practice of female genital mutilation. The prosecutor charged her father with endangering her life and forcing her to undergo FGM.

Since the law banning FGM was amended in 2008, this single case of prosecution has resulted in a trial. Activists have reported that lack of prosecutions are due to local officials considering FGM to be a private family issue rather than dealing with the crime of FGM itself.

Egyptian authorities need to take steps to ensure effective implementation of the law criminalizing the harmful procedure by ensuring that there is adequate investigation and prosecution of those who carry out the FGM procedure, Human Rights Watch said. The government needs to initiate a national strategy to end FGM by raising awareness of the mental and physical harm it does, and of the law banning it.

“This case was an important test of Egypt’s legislation criminalizing female genital mutilation,” Begum said. “It is clearly not enough to just put a law on the statute books; it must be enforced.”

According to the memorandum of the public prosecutor on the case dated March 10, 2014, as available on Shorouk news website, the evidence included a testimony from health inspector Ahmed Mosa, which described that the girl’s genitalia was cut and that she died from shock or circulatory failure. An initial post-mortem forensic report found that the doctor had not tested her for hypersensitivity to the penicillin that was used in the procedure which led to her death. An additional report from an expert committee headed by a senior forensic doctor stated that they could not confirm whether this was a FGM procedure or another medical procedure, as the doctor has claimed. The memorandum also includes investigation notes such as the father’s testimony.  He initially said he took his daughter for the FGM procedure, but then changed his testimony to claim she was experiencing abdominal pain. The public prosecutor concluded from the reports and its investigation that the procedure carried out was female genital mutilation.

The initial charge of manslaughter by negligence was settled out of court, with the doctor paying the family 5,001 Egyptian pounds (around US$700). On November 20, 2014, the minor offenses court in Agga, in Dakahlia governorate north east of Cairo, found the two men not guilty on the remaining charges. Human Rights Watch was not able to obtain the full verdict including the reasoning behind the acquittal.

According to a lawyer from the Women’s Center for Guidance and Legal Awareness, the public prosecutor filed an appeal with the minor offenses appeal court in Mansoura, capital of the Dakahlia governorate.

In 2008, after the death of an 11-year-old girl following a FGM procedure, the Child Rights Law No. 126 amended the Penal Code to provide that anyone who causes injury through performing female genital mutilation can be sentenced to imprisonment for three months to two years, or fined between 1000-5000 Egyptian pounds (approximately US$700). The Sohair al-Batea case was the first case to go to trial on charges relating to female genital mutilation.

“Egypt may have a law on the books, but the lack of meaningful prosecutions or any convictions for such a widespread problem sends a message that it is okay to carry out FGM,” said Rothna Begum. “The authorities must send a clear message to the police, prosecution and the courts on investigating and prosecuting those who perform FGM.”

Female genital mutilation is a widespread practice in Egypt. A 2008 demographic and health survey found that 91 percent of girls and women aged 15-49 years had undergone FGM. The study also suggested that the practice may be on the decline, with rates among women under age 25 at around 80 percent, compared with women aged 25-49, among whom between 94 and 96 percent were subject to female genital mutilation.

In 2007, the Grand Mufti of Egypt, who is the highest Islamic authority, issued a fatwa (religious edict) that FGM was forbidden in Islam. However, some clerics continue to openly advocate the practice. The 2008 survey found that just under half of all women aged 15-49 believed that FGM was a religious requirement and just over half felt that the practice should continue. Whatever the reasons cited, FGM is an act of violence that is irreversible and without medical justification, and which has a lasting negative impact on girls’ and women’s physical, mental, and sexual health.

“Despite some signs that FGM might be decreasing, it still remains a widespread problem,” Begum said. “If Egypt wants to show it is serious about ending FGM, it must put in place a national strategy in addition to its law, with the inclusion of religious and community leaders, healthcare professionals, teachers, and civil society to raise awareness on the harms of FGM.”

The national strategy should include support for victims of FGM including medical and psychosocial assistance and it should establish official mechanisms to monitor the progress of eradication efforts.

Egypt is required under international human rights treaties to hold private actors accountable for violence against women, including FGM. As recently as November 4, 2014, the UN Committee on the Rights of the Child and the UN Committee on the Elimination of All Forms of Discrimination against Women (CEDAW), which monitor implementation of children’s rights and women’s rights treaties that Egypt has ratified, issued a joint recommendation calling on states to eliminate harmful practices and formulate holistic strategies to end FGM.