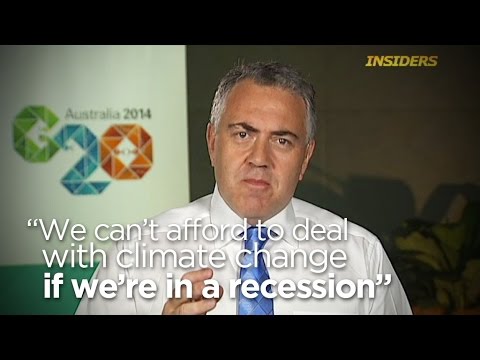 By Michelle Grattan, University of Canberra, (The Conversation)

G20 nations have supported “strong and effective” action on climate change – but included some equivocal wording on the timing for issuing post-2020 targets and on the Green Climate Fund to accommodate differences among them.

The communique issued by the leaders today said that consistent with the United Nations Framework Convention on Climate Change and its agreed outcomes, “our actions will support sustainable development, economic growth and certainty for business and investment”.

They said they would work together to achieve a successful and binding outcome at next year’s Paris Climate Conference (COP21).

“We encourage parties that are ready to communicate their intended nationally determined contributions well in advance of COP21 (by the first quarter of 2015 by those parties ready to do so),” the communique said.

It also said that the G20 “reaffirm our support for mobilising finance for adaptation and mitigation, such as the Green Climate Fund”.

But Prime Minister Tony Abbott would give no commitment that the government would donate to the Green Climate Fund, which helps developing countries deal with climate change. The government has previously been very critical of the fund.

“We are all going to approach this in our own way obviously,” Abbott said. “And there’s a range of funds which are there – and the fund in question is certainly one of them.”

Climate change was one of the most vigorously discussed issues of the G20. United States President Barack Obama determinedly pushed the issue, especially with strong words in a public address on the sidelines of the conference on Saturday, when he committed US$3 billion to the fund.

Obama said in his post summit wrap up conference that “this week we took historic steps in the fight against climate change”, pointing to the US-China agreement and to the money for the Green Climate Fund. He commended Japanese Prime Minister Shinto Abe for Japan’s US$1.5 billion to the fund.

Australia had consistently tried to limit the consideration of climate change, although in his post summit news conference Abbott pointed out that the original draft of the communique prepared by Australia had a reference to it.

Asked about his reported defence of coal in the meeting Abbott told his news conference: “I should remind everyone that right now there are 1.3 billion people right around the globe who have no access whatsoever to electricity. Now, how can those people have a better life, have a decent living standard, without access to electricity?

He said he welcomed last week’s agreement between Obama and Chinese President Xi Jinping on their post 2020 plans. “But my reading of that agreement is that 80% of China’s power needs in 2030 will be provided by coal. So coal is going to be now and for the foreseeable future a very important part of the world’s energy needs,” he said.

“What we need to do is ensure that the coal fired power stations that we need are as efficient as possible.”

However despite Abbott’s strong defence of coal, the leaders reaffirmed their commitment to phasing out fossil fuels.

The leaders committed themselves to action plans to lift global growth by 2.1% over five years, beyond what it would otherwise be. If “fully implemented” this would add more that US$2 trillion to the global economy and create “millions of jobs” they said.

Abbott said “people right around the world are going to be better off and that’s what it’s all about, it is all about the people of the world being better off through the achievement of inclusive growth and jobs”.

Asked about budget measures in the Australian action plan which the Senate is opposing, Abbott said that the government would do “everything we humanly can” to implement all the measures it had promised.

The communique said: “our measures to lift investment, increase trade and competition, and boost employment, along with our macroeconomic policies, will support development and inclusive growth, and help to reduce inequality and poverty”.

The leaders committed to “monitor and hold each other to account” for implementing their pledges.

They agreed to the goal of reducing the gap in employment participation rates between men and women in their countries by 25% by 2025. This would bring more than 100 million women into the labour force, which would “significantly increase global growth and reduce poverty and inequality”.

Australia has won approval for an infrastructure information sharing hub which will be located in Sydney.

The leaders said they were taking actions to ensure the fairness of the international tax system and to secure countries’ revenue bases. “Profits should be taxed where economic activities deriving the profits are performed and where value is created,” the communique said.

Chief Executive of The Business Council of Australia Jennifer Westacott said the G20 meeting has “reset the international growth agenda with sensible policies that can be applied both collectively and within individual nations”.

Michelle Grattan is Professorial Fellow at University of Canberra