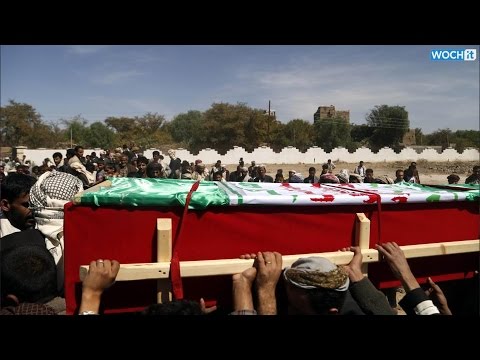 SANAA (IRIN) – Yahia Abu Talib, serious and stoic, is in no doubt about the importance of his role. “We protect homes and mosques,” he says, referring to the so-called popular committees of which he is a member.

In a mixed neighbourhood of Yemen’s capital Sana’a, Abu Talib calls himself a “social superviser” for the Houthi group known as Ansar Allah, or “Supporters of God”.

In the same area, off Hayal Street, a young man with an AK-47 slung over his shoulder identifies himself as a ninth grader. He is responsible for guarding a government warehouse, attending school in the day and doing shifts through the night. “[I am here] to defend Yemen,” he says.

The two men are part of a new reality on the ground in Yemen’s capital. After more than a decade of on-and-off conflict with the government and allied tribes, in September the Houthis – a Zaidi Shia Muslim group – advanced from their northern base in Sa’dah, seizing control of many parts of the capital.

Since then, while they have officially agreed to withdraw, in reality they remain the power players in the city: On 31 October they warned President Abdrabuh Mansur Hadi to form a new government within 10 days or a “national salvation council” would take its place.

Their popular committees – a mix of community members, Houthi supporters from outside Sana’a, and in particular youths with guns – have mushroomed at new, improvised checkpoints across the city, acting as a “neighbourhood watch” system. They say they are merely unpaid volunteers, inspecting cars and residents to ensure they do not pose a threat.

Supporters point out that they have brought order to a city where the government has struggled to provide even basic security in recent years. Critics charge that they act as a partisan force in a polarized conflict and their presence is likely to encourage rivals to pick up arms, bringing more violence to the urban setting. They also accuse the Houthis of violently suppressing dissent – several members of Islah, Yemen’s influential Islamist party, declined to be interviewed for this article citing fears of reprisal for speaking out.

The Houthis themselves claim to have national interests at heart, saying they protect everyone – including political opponents. But those in the opposition certainly do not think so.

On 9 October a suicide bomber blew himself up near a checkpoint at a Houthi gathering in central Tahrir square. The bombing, which killed nearly 50 people and injured more than 100, was claimed by the southern-based Ansar Al-Sharia, a Sunni subsidiary of Al-Qaeda in the Arabian Peninsula. They had previous warned that the Houthi decision to seize Sana’a would be met with force.

The result of the violence is an increasingly polarized population. “The streets are politicized,” George Abu Al-Zulof, Yemen representative of the UN Office of the High Commissioner for Human Rights (OHCHR), told IRIN. “When you talk to people who are with the Houthis, they are happy. The opposition feel threatened and vulnerable.

Partisan media, Abu Al-Zulof said, has contributed to the problem, often publishing unverified information painting political opponents in a negative light. “This lack of understanding has created this fear,” he said.

The Houthi advance came after four years of political upheaval following the resignation of former President Ali Abdullah Saleh, who relinquished power following mass anti-government protests in 2011. Yemen’s ambassador to the UK, Abdullah al-Radhi, recently warned that the country was at risk of descending into civil war.

Yet in the capital, after the violence of late September an uneasy calm has broken out since the Houthis and other political parties signed a UN-backed peace agreement with the government. Despite occasional attacks, Houthi forces appear determined to remain in power.

On 3 November, however, one of the signatories of the peace agreement – the head of one of Yemen’s leading liberal parties – was shot dead. While no group has yet claimed responsibility, Mohammed Abdel Malek al-Mutawakel’s death sparked fears of attacks on those cooperating with the Houthis.

In their private moments even Houthi supporters fear that their fighters cannot keep the peace forever. The day after the suicide bombing, 23 year-old Ibrahim Al-Mahatawi’s car was targeted by an explosive device. While he survived, Al-Mahatawi, a Houthi, is currently awaiting an operation for injuries sustained in the blast.

Ansar Al-Sharia claimed responsibility. The group alleges that Al-Mahatawi is the nephew of a prominent Zaidi cleric with the same last name. Ibrahim denied that he was any relation to the cleric, as did several other Houthi sources.

“I knew [Ansar Al-Sharia] were attacking Ansar Allah, but I didn’t think I would be attacked personally,” he said. He denounced the incident as “un-Islamic” and blamed the interference of “foreign intelligence in Yemen”.

Those with no political interests – like Abdulla Ameen Senan – are also seeing their lives disrupted. When asked if he identified with any party, Senan replied: “I am just looking for a job. That’s all.”

It is proving harder than he thought. A recent graduate, his brother-in-law was going to lend him money to start a small business with the profits from the sale of his grocery store. Yet the start of the Houthi advance caused the buyer to pull out – leaving Senan’s dreams on hold.

“People are trying to have a normal life, but they keep waiting for what happens next,” Senan, 25, said. “No one knows what will happen.” He dismissed Yemenis’ desire to fight over religion, saying most were just trying to put food on the table.

Jane Novak, an independent analyst focused on Yemen, stressed that the Houthi-AQAP dispute was fuelled by frustrations over security and the cost of living in a country where roughly half the population lives below the poverty line. The Houthi protests were sparked by the government’s decision to lift subsidies on fuel that saw prices increase by 50 percent over night.

“While there is more religious tension than in the past, what the whole country wants is jobs,” she said.