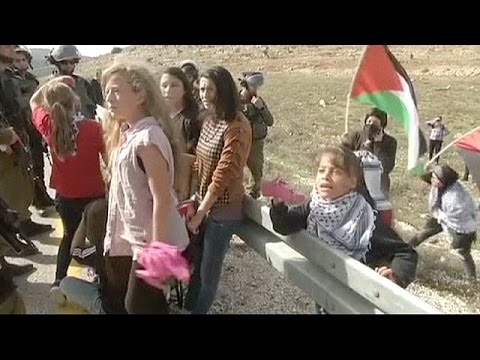 NABLUS (Ma’an) — An Italian was critically injured along with 11 Palestinians on Friday afternoon after Israeli forces opened live fire on a protest march in the village of Kafr Qaddum west of Nablus.

Palestinian Minister of Health Jawad Awwad told Ma’an that Italian solidarity activist Patrick Corsi, 30, was injured after Israeli forces fired several bullets at him in the stomach and chest.

The minister said that Corsi was in “critical” condition as a result of the shooting, which took place during a protest march against the Israeli occupation.

Awwad said that “shooting live fire at the upper part of the bodies of protesters is directly targeting them and is a deliberate attempt at murder.”

“Israel does not differentiate between foreign solidarity activists, Palestinians, or even journalists,” he added.

The International Solidarity Movement, an activist group whose members frequently attend Palestinian protests to monitor the actions of Israeli soldiers, confirmed the shooting in a statement, adding that an 18-year-old Palestinian was also shot in the chest with live bullets.

“The Italian activist, known as Patrick, was wearing a yellow high visibility jacket when he was shot,” the statement said.

“We were standing with a group of Palestinian demonstrators when Patrick was shot. The military had fired three rounds of tear gas, and then a shot rang out and Patrick stumbled back. There was between five and ten minutes from the last tear gas canister fired and the bullet that shot Patrick.”

“He was just standing there, peacefully protesting, wearing a hi-viz jacket, he wasn’t doing anything and they just decided to shoot him,” the statement quoted an ISM volunteer at the scene as saying.

The statement added that 10 Palestinian protesters were wounded by rubber-coated steel bullets at the protest in addition to 18-year-old Sami Jumma who was struck by live fire.

“The bullet entered Patrick’s chest near a main blood vessel, but thankfully did not puncture it. If God forbid it had, the lengthened journey to the hospital because of the closed road could have cost Patrick his life,” ISM media coordinator Ally Cohen was quoted in the statement as saying.

Due to an Israeli closure of Kafr Qaddum’s main road to Nablus, the travel time to the nearest hospital is around 30 minutes instead of 10.

Khaldoun Ishtewi, media coordinator for public campaigns in Kafr Qaddum, told Ma’an that the Italian national was taken to the Rafidia Public Hospital in Nablus for treatment.

Ishtewi added that several Palestinians suffered from excessive tear-gas inhalation as a result of canisters fired by Israeli soldiers during the clashes.

An Israeli military spokesman did not immediately return a request for comment.

Protests are held every Friday in Kafr Qaddum against Israel’s closure of a main road linking the village to its nearest city, Nablus, as well as against the Israeli occupation more generally.

The internationally recognized Palestinian territories of which the West Bank and East Jerusalem form a part have been occupied by the Israeli military since 1967.

“An eight-year-old Palestinian girl is opposing the Israeli occupation of her West Bank village – with a mobile telephone. Jana Tamimi makes news reports about the regular conflicts with Israeli soldiers in Nabi Saleh, filming video on a camera phone and posting it online.”