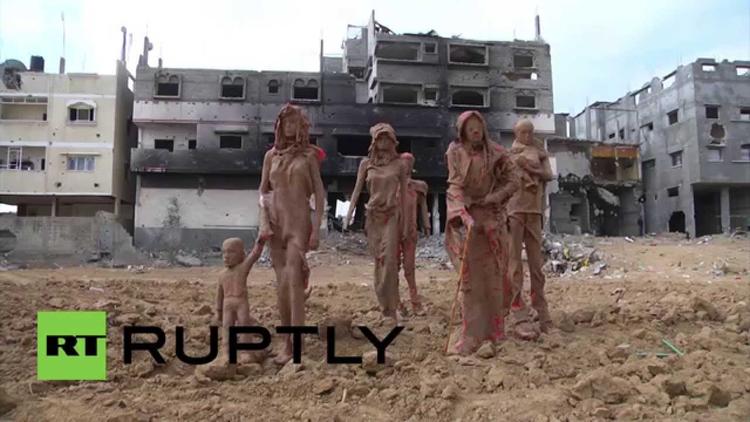 The biggest death toll has stemmed from the civil war in Syria, currently in its fourth year, followed by casualties from the devastating 50-day Israeli air attacks on Gaza last August.

The Syrian Observatory for Human Rights (SOHR), which monitors the battlefields of Syria, has estimated the number of women killed at over 6,000 and the number of children at more than 9,400, by the end of August (with total deaths of over 190,000 since 2011).

The United Nations has described the killings in Gaza as “appalling”, with over 2,200 Palestinians dead, of whom 459 were children and 239 women (compared with 64 Israeli soldiers, two civilians and one foreign national).
Related IPS Articles

Against this backdrop, the International Civil Society Action Network (ICAN) is holding a five-day conference in Turkey, scheduled to conclude Nov. 11, which will focus on two of the biggest challenges facing women, particularly in the Middle East: extremism and militarism.

“This past year, our counterparts have faced incomprehensible challenges, including politically and religiously motivated violence, extreme economic hardships and closure of public spaces,” says ICAN.

The participants in the meeting include over 50 women activists from 14 countries across the Middle East, North Africa and South Asia, including Egypt, Iran, Iraq, Palestine, Tajikistan, Libya and Yemen.

Stressing the importance of the meeting, ICAN co-founder Sanam Anderlini told IPS it’s the first time women from the region are gathering to talk about their experiences since three major developments in the Middle East: the rise of the extremist Islamic State of Iraq and Syria (ISIS), the Israeli bombings in Gaza and the Tunisian elections.

And most importantly, the meeting will focus on women’s perspectives, vision and strategies on the present crisis – and also propose solutions for dealing with the spread of both extremism and state militarism, she added.

In a statement released this week, ICAN also pointed out that women continue to be excluded from international decision-making arenas and the media – despite provisions in the landmark U.N. Security Council Resolution 1325 on women, peace and security.

Meanwhile, the low representation of women (three out of 14) in a new U.N. blue ribbon panel on peacekeeping operations has generated strong criticism.

Stephen Lewis, a former deputy executive director of the U.N. children’s agency UNICEF, complained about the marginalisation of women in an important panel, to be chaired by former president of Timor-Leste Jose Ramos Horta.

In a letter to Secretary-General Ban Ki-moon, both Lewis and Paula Donovan, who are co-directors of AIDS-Free World, said:
“This pattern must be reversed. The gender equity you profess to espouse can only be achieved by the appointment of eight additional women to the panel.

“If a panel of that size seems too unwieldy, some of your appointees must be asked to relinquish their seats to qualified women in order to achieve balance.

“If you leave things as they are, this panel will become a testament to the yawning, unbridgeable hypocrisy between U.N. performance and U.N. rhetoric,” the letter said.

Asked for his comments, an apologetic U.N. deputy spokesman Farhan Haq said, “I guess this is one case where we have to just make a very sincere apology.

“We try as hard as we can to get the right gender balance and the right regional balance for these very large panels, and sometimes it’s a question of availability,” he said. “But when we make a mistake on that, you’re absolutely right, that’s a low number, and we’ll have to do better.”

Last week was the 14th anniversary of Resolution 1325, which was adopted on Oct. 31, 2000, stressing the importance of women’s equal participation and full involvement in all efforts for the maintenance and promotion of peace and security and urging, first and foremost, increased representation of women at all decision-making levels in national, regional and international institutions and mechanisms for the prevention, management, and resolution of conflict.

Asked if 1325 has had any impact in terms of women’s security in war zones, Anderlini told IPS that it varies from country to country. In South Sudan, for example, the NGO Non Violent Peace Force has trained all-female teams to be deployed around the country.

In the Philippines, she said women demanded and established an all-women civilian ceasefire monitoring team.

“It makes a difference because they pay attention to the security of civilians making sure people have safe humanitarian passage,” Anderlini said.

She said by and large the United Nations and member states really haven’t done as much as they could. For example, she said, India has deployed an all women unit of peacekeepers to Liberia. Other countries could do the same.

The United Nations could also give priority deployment to countries with a higher percentage of women peacekeepers and police officers.

“It would certainly help reduce the risk or actual incidence of sexual abuse of local women by peacekeepers,” Anderlini added.