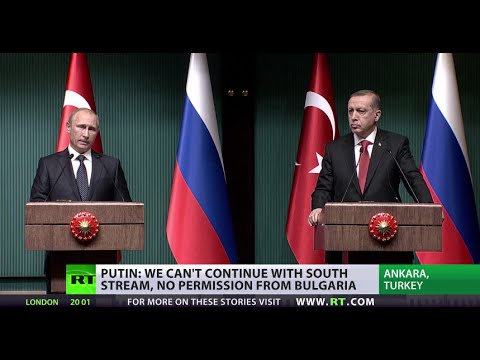 The Russian annexation of Crimea and heavy interference in the Ukraine has had a significant consequence for its hydrocarbon industry. President Vladimir Putin has been forced to cancel a planned natural gas pipeline that would bring the fuel to southern Europe, because of European Union pressure for boycotting Russia. Moscow will not suffer very much economically, however, since it can sell as much natural gas to Turkey as it had been planning to sell to southern Europe, though perhaps at a bigger discount (Turkey has 75 mn people and is the world’s 17th largest economy. Greece has 11 million people and a small economy.)

The Ukraine crisis was in some ways provoked by aggressive expansionism by the EU and NATO into former Russian spheres of influence, in contradiction to promises made by the West to Premier Mikhail Gorbachev in the early 1990s. But be that as it may, Russia’s unilateral annexation of the Crimea and heavy interference in eastern Ukraine is inconsistent with international law.

Turkey plans to grow its economy substantially in the coming decade and is energy hungry, lacking much in the way of gas or oil itself, though it has coal. Slightly discounted Russian natural gas seems a good deal to Ankara. Moreover, Turkey has been rudely rebuffed in its bid to join the European Union, and this deal with Russia is a way for the Turks to remind the Europeans that if the EU had wanted Turkey to join its consensus, it could have admitted Turkey. As things now stand, Ankara is a free agent, and glories in its independence. Russian natural gas also has advantages for Turkey at the moment over Iranian natural gas, since the US has been pressuring countries not to deal with Iran or to allow bank transfers of money from Iran.

The significant political differences between Turkey and Russia on the Crimean Tartars and on Bashar al-Assad in Syria appear to have proved no bar to these economic deals.

Environmentally, burning natural gas is bad, but it isn’t nearly as bad as burning coal; some consider it half as carbon-intensive as coal, but that idea probably underestimates the methane emitted in drilling for gas. And, Turkey has big plans for coal. A
Greenpeace study [pdf] observes:

“According to the World Resources Institute, Turkey plans 50 coal-fired power plants with a total installed capacity of 37,000 MW. This will rank Turkey first among OECD countries investing in new installed coal capacity and fourth globally, behind only China, India and Russia. Some projections suggest up to 86 new coal plant projects, when accounting for those that are in the process of permitting and those that have failed the application process.

In 2011, Turkey’s overall energy mix was comprised of 31% coal, 32% natural gas, and 27% petrol, with the remaining 10% composed of hydropower, wood/biofuels and wind. The Ministry of Energy and Natural Resource’s energy vision for 2023 predicts a near doubling of total energy sources, with the only significant difference that use of gas would decrease in relative terms to 23% and the use of coal would increase to 37%. In absolute terms this would mean a 2.3-fold increase of coal use in just 12 years.”

A person can only hope that the diversion of Russian natural gas to Turkey will forestall the building of some of those 50 or 85 coal plants, which are an environmental catastrophe waiting to happen. Why sunny and windy Turkey doesn’t initiate a crash program of renewables is a huge mystery, since then their fuel would be free and their economy would really take off.

My advice to Greece and other southern European countries that Putin has just by-passed for natural gas is to turn to renewables rather than seeking to replace Russian gas with Qatari. Italy gets 7% of its electricity from solar. http://m.greenpeace.org/espana/Global/espana/2014/Report/energia/20140624%20IEA%20Spanish%20IDR%20Greenpeace%20.pdfSpain gets 42% of its electricity from renewables.[pdf] Greece so far has little wind or solar power, its main renewable source for electricity being hydroelectric. About half of its electricity comes from dirty lignite coal. A quarter is from gas. Greece has enormous solar and wind potential but its government hasn’t promoted it. Putin wants to maneuver Turkey into reselling Russian gas to southern Europe, so as to sidestep sanctions. But if Turkey and Greece initiated a crash program of renewables they would save money and remove themselves from the geopolitical cross fire.