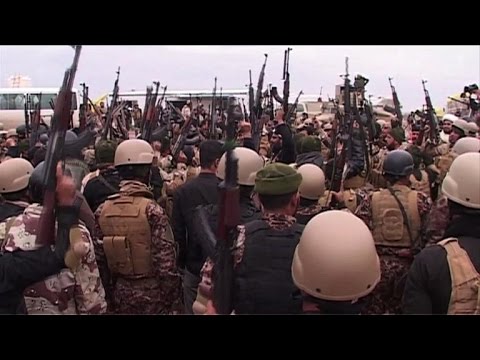 Kidnappers in Baghdad are disgusing themselves in Iraqi army uniforms.

There’s been a rise in crime and kidnapping in Baghdad and it seems that perpetrators are often in military uniform, driving official cars. This has led locals to suspect members of Shiite Muslim militias recently formed to fight extremists. But even if locals are kidnapped, they don’t complain – they don’t want to tarnish the reputation of those “defending” their city and sect.

Baghdad local Nawar Mohsen was just minding his own business in his store, where he sells gold jewellery and ornaments, when three men in military uniform came in. They told him that he was wanted by the judiciary. So helpless and confused, all Mohsen could do, was follow them out of the store.

It didn’t take him long to realize that he wasn’t actually with the Iraqi military at all; he had been kidnapped. Mohsen ended up a captive of the gang that took him for three days until his family agreed to pay the ransom they demanded. It was only then that he was dropped off by the side of the road, without any money or his mobile phone.

Mohsen says he didn’t go to the authorities because he is almost certain the kidnappers live in the same area he works in – in fact, he thinks he was even kept captive nearby. “The car that drove me there only drove for about five minutes,” he explains. Mohsen has since moved house and submitted an application to immigrate elsewhere; he says he is scared the kidnappers will return for him. “The money we paid the kidnappers would have allowed us to start a good life in Europe,” he notes sadly.

Mohsen’s story is not a unique one. There has been a steady rise in the number of kidnappings in Baghdad for the past month or so.

Official security forces have been very busy elsewhere dealing with the threat posed by the group known as the Islamic State, which has taken control of large amounts of territory in Iraq and which threatens Baghdad, if not directly at the moment, then most certainly with car bombs, suicide bombers and other terrorist actions. While official security forces like the army and police have been at work elsewhere, there has been a rise in the number of unofficial militias patrolling Baghdad’s streets. Most of these are Shiite Muslim locals who have answered a call to protect members of their own sect; unfortunately some units of these militias operate more like criminal gangs than a trained army. And it is suspected that their increasing influence and freedom of movement in Baghdad is behind the increase in kidnapping and crime.

Members of the Shiite Muslim militias have also been accused of committing murder and other crimes as they have been able to roam more freely around the country.

Iraq’s new Prime Minister Haider al-Abadi has expressed concern about the growing number of kidnappings and has formed a dedicated anti-kidnapping unit within the Baghdad Operations Command, the military unit dedicated to the capital’s security.

Almost immediately the unit discovered something alarming – many of the kidnappers were seen to be wearing military uniforms and driving expensive cars with tinted windows, similar to those owned by senior government officials.

Everyone in Baghdad knows only too well who has uniforms and these kinds of vehicles – members of the government’s official security forces, the special body guard units that protect senior Iraqi politicians and the unofficial mostly Shiite Muslim militia groups that have been mobilised to confront the IS group.

“Over the last few days the security forces have captured several of the gangs associated with these kidnapping crimes,” the spokesman for the Baghdad Operations Command, Saad Maan, told NIQASH. “These gangs have been using the names of some of the militias and they’ve forged the identification cards and uniforms in order to carry out their crimes.”

Within just one gang, Maan relates, the nine members all drove SUVs and were wearing military uniforms when they went out to kidnap people.

A lot of Baghdadis don’t believe this official line though. They know that the Shiite Muslim militias have strong links to Iraq’s ruling political parties and that’s why they won’t go to the authorities with any complaints.

Arkan Majid lives in Baghdad’s Bayaa nieghbourhood and works in an auto sales showroom. Last week he got a call from an unknown number: The caller told him that his youngest child had been kidnapped and asked for a large ransom.

Majid says he paid the ransom and his child was returned. However because the kidnappers had called him through a local mobile phone company he was able to get an idea of who had committed the crime. “Rather than using Internet calling, they called me through a number I didn’t know – I had the number,” he told NIQASH. Majid also has a friend who works for that mobile phone service and he got him to identify the phone number’s owner. They found out that the number belonged to the son of a neighbour, a young man who had volunteered for a militia to fight against the IS group.

However just as with jewellery store owner Mohsen, Majid decided not to go any further and complain to the authorities. He did not want to be accused of tarnishing the reputation of those who had joined the fight against the IS group.

It is actually not surprising that some members of these militias are using their newfound power to commit violations against the ordinary people they are supposed to be protecting, Rashid al-Samarrai, a local security expert, told NIQASH. “After all their recruitment was hasty and there were no restrictions as to who could join them.”

“When somebody volunteers for the Iraqi military or police they are not supposed to have a criminal record,” al-Samarrai continues. “Often friends and neighbours are asked about their conduct and if they can vouch for them, to ensure that the volunteer is not just out there looking for trouble. However that’s not the case for these militias – they were recruited in a chaotic way and without any regard for history or personality.”

Additionally one could argue that, even if members of the unofficial Shiite Muslim militias had the best of intentions and motivations for joining the units, their leaders are certainly too preoccupied with the fight against the IS group to make sure that all of their members are behaving properly. There are no repercussions for bad behaviour and the door is wide open for abuses of power that include robbery, extortion and kidnapping.

Meanwhile it is the ordinary people of Baghdad who must pay the price, trapped between car bombs, the terrorist IS group and now the ever-increasing threat of crime, both petty and grand.

Related video added by Juan Cole (about role of militias, not any crimes with which they are associated):

AFP: “Iraq: Army and Shiite militias pushing against IS group in north”