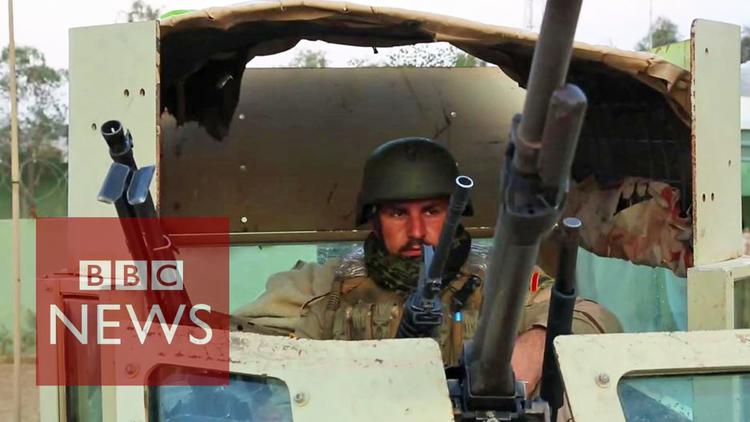 Last week, fighters from tribes in Anbar were forced to give up their hold on the town of Wafaa to extremists from the Islamic State because they ran out of ammunition. And they ran out because apparently the Iraqi government won’t supply them. The steady defeat of anti-extremist tribes in Anbar and a new political dispute among them seems to be bringing the whole province closer and closer to total control by the Islamic State group.

Events over the past few weeks in Anbar have made it seem as though the province is coming closer and closer to falling completely into the hands of the extremist group known as the Islamic State, or IS. The extremists are closing in on government-controlled areas and internal power struggles between local tribes are also causing trouble.

There are a number of local Sunni Muslim tribal groups who have announced that, although they don’t like the Iraqi government, which is Shiite Muslim-led, they dislike the Sunni Muslim extremists in the IS group even more. That’s why, they say, they will fight the IS group. The most prominent are the Abu Risheh, al-Bu Fahd, al-Bu Thiyab, al-Bu Ulwan, al-Abed, al-Bu Issa, al-Bubali and the al-Bu Nimr tribes. Some were members of the US-sponsored forces that fought Al Qaeda – of which the IS group is an offshoot – here previously.

Many of the leaders of these groups are becoming angrier at the Iraqi government, saying that despite the fact that their men have fought, and died, alongside the Iraqi army in battles against the IS group, the Iraqi government doesn’t care about them. And some are even suggesting that it is the Iranian influence on the Iraqi government that is to blame – neighbouring Iran is a Shiite-Muslim-led theocracy and Iraq’s government is currently headed by Shiite Muslim-led political parties.

“The Iraqi government only wants to give the people of Anbar two options,” one of the leaders in Anbar, Mahmoud al-Fahdawi, told NIQASH. “Either the IS group enters Anbar. Or the Shiite Muslim fighters come in. The government doesn’t want the Sunni Muslim tribes to play a larger role in the liberation of Anbar, it wants the Shiite Muslim militias that it sponsors to do this,” he complained.

The Shiite Muslim militias, which consist of many volunteers who were moved to defend their own sect after the Sunni Muslim extremist IS group attacked, are well known to be sponsored, and in some cases even controlled, by Iranian operatives.

Al-Fahdawi speculates further that the US government has said that it will arm the Sunni Muslim tribes in Anbar soon because the Iraqi government won’t. This is causing tension in the relationship between the US and Iran, he suspects.

Last Friday the US Senate approved the country’s defence budget, which topped US$500 billion. This includes US$3.4 billion for the direct deployment of US forces against the IS group and a further US$1.6 billion for the training of Iraqi Kurdish and Iraqi forces for two years, in their own fight against the IS group. The Iraqi government was also expected to foot a significant proportion of the bill for the latter.

The other big problem in Anbar at the moment is infighting between the various tribal groups about who the governor of Anbar is. Last year Sunni Muslim demonstrators, who had protesting their treatment by the former Iraqi government for months, made local man Ahmed Khalaf al-Dulaimi, the governor of Anbar.

Al-Dulaimi supported the protests and he was also able to gain the support of one of the country’s most prominent Sunni Muslim politicians, Osama al-Nujaifi. Al-Nujaifi and his party supported al-Dulaimi’s governorship in any voting.

However at a meeting that al-Dulaimi held with former Iraqi Prime Minister Nouri al-Maliki in late 2013, the governor of Anbar admitted to the Prime Minister that there might well be some terrorists among the protestors, which was something the Prime Minister had always accused the demonstrations of. After the meeting, al-Maliki released portions of the filmed conversations during which al-Dulaimi had said all this – and when they saw it, many in Anbar began to consider their governor a traitor.

The chaos that ensued in Anbar after al-Maliki and the Iraqi army cleared the demonstrators away forcefully meant that al-Dulaimi ended up staying in the governor’s seat. And when the governor was badly injured during battles between the Iraqi army and the IS group in the Haditha district, Anbar locals once again began to respect him. But after this, al-Dulaimi was flown to Germany where his serious injuries were treated and he has now been away from the job for over three months. If officials are absent from their posts for more than three months the Iraqi Constitution says they may be dismissed. Last week members of Anbar’s provincial council did just that, voting to dismiss al-Dulaimi.

However the tribes that supported al-Dulaimi’s election have not been pleased about this and say that they reject the council’s decision. This has led to political conflict between Anbar’s tribes with some tribal leaders even threatening to stop fighting the IS group, at what is obviously a crucial time for unity.

Currently the IS group or their allies control seven major cities in the Anbar province – these are Fallujah, Karamah, Anah, Rawa, Heet, Al Qaem and Al Rutba. The cities still controlled by the Iraqi government or their allies include Ramadi, Haditha and Khalidiya. But these three cities are facing daily attacks from the IS group and in fact, fighters from the group have made advances in parts of Ramadi and Khalidiya over the past few days.

“All of Anbar could fall into the hands of the IS group any day now,” military and security expert Saad al-Alusi, also the former spokesperson for Iraqi military intelligence, told NIQASH. “Surely the government must know that preventing the rest of Anbar from falling into the IS group’s hands is going to be much easier than liberating those parts of the province after they’ve fallen.”