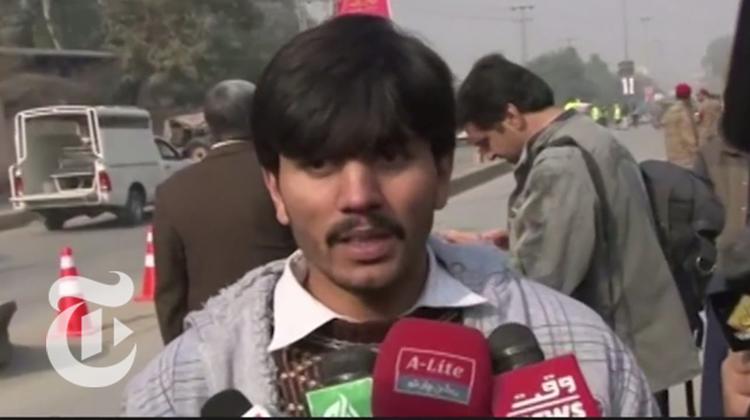 Islamist militants have killed more than 140 people at a military-run school in Peshawar, most of them children, in a devastating assault Prime Minister Nawaz Sharif called a “national tragedy unleashed by savages.”

PESHAWAR, Pakistan — In the wake of a brazen mid-morning attack on an army-run school in Peshawar, students who survived described a massacre.

Ebad and other students were assembling at a school auditorium for first-aid training when the militants announced their arrival at Peshawar’s Army Public School with gunfire and explosions.

Bent on revenge for recent military operations in restive North Waziristan, a group of armed men belonging to the Tehrik-e-Taliban (TTP) burst into the room and began taking out students and teachers alike.

Ebad, a 10th-grade student, was one of the survivors of the attack, in which more than 125 were killed and 122 injured, the vast majority of them schoolchildren.

“It was 10:30 this morning when we were called to an auditorium to get first-aid training by an army colonel,” he said. “When we walked in, gunshots erupted and [the militants] entered the auditorium. They killed many students — I saw about 40 to 50 students killed in front of me — and they also fired at the colonel. There were bomb blasts, as well. I saw four or five [militants] dressed in plain black clothes.”

From there, Ebad said, the militants turned their focus to other classrooms, where some 500 students were studying.

“One of my colleagues breathed his last breath in my arms,” he said. “Many students were shot in the legs, the face, in the back.”

Anees was sitting in his fourth-grade classroom when his lessons were disrupted by the sound of gunfire.

“Our teacher said there was a drill outside. But when we looked outside, army soldiers entered our classroom and asked us to leave,” said Anees, who said he saw two attackers. “We ran out of the class as the teachers had ordered. A male and a female teacher were killed.”

At first, Ahmand said, some of the older students thought it was a hoax — fellow students pretending to be militants.

“Then they started firing,” Ahmand said. “The boys ran away…then [the militants] went toward the classes and started entering the classrooms and firing.”