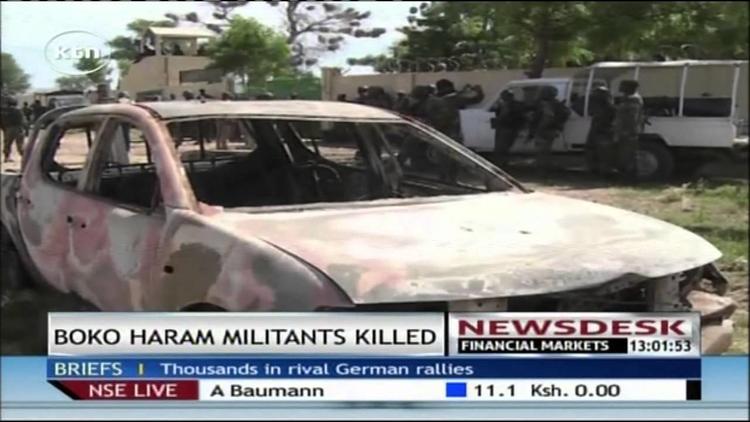 MAROUA, Far North Region, Jan 14 2015 (IPS) – “I’d quit my job before going to work in a place like that.” That is how a primary school teacher responded when IPS asked him why he had not accepted a job in Cameroon’s Far North region.

James Ngoran is not the only teacher who has refused to move to the embattled area bordering Nigeria where Boko Haram has been massing and launching lightning strike attacks on the isolated region.

Raids by the Boko Haram insurgents in the Far North Region have created a cycle of fear and uncertainty, making teachers posted here balk at their responsibility, and forcing those on the ground to bribe their way out of “the zone of death.”

Last week, Boko Haram leader Abubakar Shekau threatened Cameroon in a video message on YouTube, warning that the same fate would befall the country as neighbouring Nigeria. He addressed his message directly to Cameroonian President Paul Biya after repeated fighting between militants and troops in the Far North.

Shekau was reported killed in September by Cameroonian troops – a report that later turned out to be untrue.

As the Nigerian sect intensifies attacks on Cameroonian territory, government has been forced to close numerous schools. According to Mounouna Fotso, a senior official in the Cameroon Ministry of Secondary Education, over 130 schools have already been shut down.

Most of the schools are found in the Mayo-Tsanaga, Mayo-Sava and Logone and Chari Divisions-all areas which share a long border with Nigeria, and where the terrorists have continued to launch attacks.

“Government had to temporarily close the schools and relocate the students and teachers. The lives of thousands of students and pupils have been on the line as Boko Haram continues to attack. We can’t put the lives of children at risk,” Fotso said.

“We are losing students each time there is an attack on a village even if it is several kilometres from here,” Christophe Barbah, a schoolmaster in the Far North Region’s Kolofata area, said in a press interview.

The closure of schools and the psychological trauma experienced by teachers and students raises concerns that the Millennium Development Goal (MDG) on education will be missed in Cameroon’s Far North Region.

Although both government and civil society agree that universal primary education could attained by the end of this year in the country’s south, the 49 percent school enrolment rate in the Far North Region, compared to the national average of 83 percent, according to UNICEF, means a lot of work still needs to be done here.

Mahamat Abba, a resident of Fotocol whose four children used to attend one of the three government schools there, has fled with his entire family to Kouseri on the border with Chad.

“I looked at my kids and lovely wife and knew a bullet or bomb could get them at any time. We had to run away to safer environments. But starting life afresh here is a nightmare, having abandoned everything,” he told IPS.

Alhadji Abakoura, a resident of Amchidé, adds that the area has virtually become a ghost town. “The town had six primary schools and a nursery school. They have all been closed down.”

As students, teachers and parents relocate to safer grounds, pressure is mounting on schools, which have to absorb the additional students with no additional funds.

According to UNICEF figures for Cameroon, school participation for boys topped 90 percent in 2013, while girls lagged behind at 85 percent or less. However, participation has been much lower in the extreme northern region.

According to the Institut National de la Statistique du Cameroon, literacy is below 40 percent in the Far North, 40 to 50 percent in the North, and 60-70 percent in the central north state of Adamawa. The Millennium Development Goal is full primary schooling for both sexes by 2015.

“Many of us are forced to follow lectures from classroom windows since there is practically very limited sitting space inside,” Ahmadou Saidou, a student of Government Secondary School Maroua, tells IPS. He had escaped from Amchidé where a September attack killed two students and a teacher.

Ahmadou said the benches on which three students once sat are now used by double that number.

“In normal circumstances, each classroom should contain a maximum of 60 students. But we are now in a situation where a single classroom hosts over one hundred and thirty students,” he said. “We are redeploying teachers who flee risk zones…we are getting them over to schools where students are fleeing to.

“These attacks are really slowing things down,’ Mahamat said.

Government response to the crisis

The Nigerian-based sect Boko Haram has intensified attacks on Cameroon in recent years, killing both civilians and military personnel and kidnapping nationals and expatriates in exchange for ransoms.

To respond to the crisis, Cameroon has come up with military and legal reforms. A new military region was set up in the country’s Far North Region. According to Defence Minister Edgar Alain Mebe Ngo’o, “The creation of the 4th Military Region is meant to bring the military closer to the theatre of threats, and to boost the operational means in both human and material resources.”

Military equipment has been supplied by the U.S., Germany and Israel, according to press reports.

Mebe Ngo’oo said Cameroon will recruit 20,000 soldiers over the next two years to step up the fight against the terrorists. Besides the military option, Cameroon has also come up with a legal framework to streamline the fight against terrorism. An anti-terrorism law was passed by Parliament in December, punishing all those guilty of terrorist acts by death.

But opposition political leaders, civil society activists and church leaders have criticised it as anti-democratic and fear it is actually intended to curtail civil liberties.