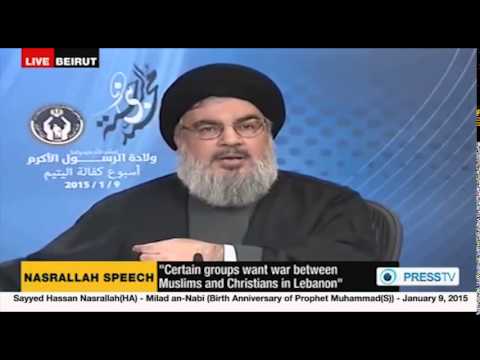 In a speech in Beirut on January 9, 2014, on the occasion of the birth of the Prophet Mohammed, Hezbollah secretary general Hassan Nasrallah declared that killings and beheadings by “takfiris” (excommunicators) are more harmful to Islam than are cartoons or books mocking the Prophet. This was an implicit reference to the recent rallies in Paris and the attack on the offices of the satirical newspaper Charlie Hebdo. Nasrallah declared that, “The behavior of the takfiri groups who claim to follow Islam have distorted Islam, the Quran, and the Muslim nation more than Islam’s enemies . . . [who] drew cartoons of the Prophet . . . . Takfiris are the biggest threat to Islam, as a religion and as a message.”

This statement is something of a divergence for Nasrallah. It stands in stark contrast to his previous pronouncements during the Danish cartoon controversy of 2006, and his statements about the Salman Rushdie affair. In regard to the Danish cartoons Nasrallah remarked, “We are a nation that can’t forgive, be silent, or ease up when they insult our Prophet and our sacred values . . . . Let George Bush and the arrogant world know that if we have to . . . we will defend our Prophet with our blood.” In a separate speech on the same topic, Nasrallah also added his contribution to those calling for the assassination of the writer Salman Rushdie, whose work was deemed insulting to Islam: “If any Muslim had carried out the fatwa of Imam Khomeini against the apostate Salman Rushdie, then those despicable people would not have dared to insult the Prophet Muhammad—not in Denmark, not in Norway, and not in France.” He continued: “This is about the Prophet of the Muslims, the Prophet of 1.4 billion Muslims. I am certain that not only millions but hundreds of millions of Muslims are ready and willing to sacrifice their lives in order to defend the honor of their Prophet.”

What explains the surprising discursive shift on the part of Hezbollah’s leadership, in which the violent actions of the Sunni “takfiris” are now portrayed as a greater threat than Western insults? Is it perhaps a case of, “the enemy of my enemy is my friend?”

Nasrallah’s statements should be understood in the context of the organization’s ongoing involvement in the Syrian civil war on the side of the Assad regime, and the existential threat that it perceives in the rise of the Sunni-inspired Islamic State. The difference between today and 2006 is that during the previous decade Hezbollah was still talking about rapprochement between the two Islamic sects. For many years, Hezbollah presented itself as a Muslim resistance organization of the oppressed (mustad`af), against the oppressors (mustakbir) represented by Israel, the United States, and the West in general. It saw itself not as an exclusionary Shiʿi organization but as a proponent of Muslim unity. In 2006, Hezbollah’s primary demon was an external enemy who not only persecuted Muslims in their own land (Iraq and Palestine) but who also insulted their beliefs and their personhood. Thus, the Danish cartoons and the issue of free speech were interpreted in the context of the West’s ongoing “crusade” against the Muslim world, its double standards when it comes to democracy promotion (supporting friendly dictators in Egypt, Tunisia, and Saudi Arabia but overthrowing those who failed to toe the US line), and its cynical use of human rights as an instrument to undermine foes even as it turns a blind eye to the practices of its allies.

It is therefore not surprising to see Nasrallah in 2006 telling US leaders to “shut up” and to stop blaming Iran and Syria for the popular protests in the Muslim world. The apogee of Nasrallah’s relevance probably occurred that same year, when Hezbollah faced off against Israel and survived an onslaught intended to destroy the organization’s capacity for resistance. Nasrallah’s success in holding Western powers at bay made him into a hero in the Arab world, and arguably throughout the Muslim world at large. However, Hezbollah’s role as a Muslim unity organization against perceived Western imperialism began to collapse almost immediately after 2006, as it became embroiled in a series of conflicts against Lebanon’s Sunnis. In May of 2008 Hezbollah fighters invaded and took control of the Sunni areas of Beirut, in a show of force intended to demonstrate the organization’s exemption from government control. This was a watershed moment, in that it indicated Hezbollah’s prioritization of its sectarian autonomy over its pan-Islamic identity as a popular resistance movement. From that time onward Hezbollah began to function more and more as a representative of narrow Shiʿi interests in Lebanon, rather than as a group protecting all of Lebanon from external aggression. The consequence was a rapidly diminishing support for the organization in Lebanon.

During the past few years Hezbollah has attempted to balance broad claims about the perfidy of the West and the plight of the downtrodden against the reality of the organization’s embroilment in sectarian conflicts. In its 2009 Manifesto Hezbollah once again emphasized that the imperialist ambitions of the US and Israel are the “primary root” of suffering in the Middle East. In many ways, however, Hezbollah was scaling back its ambitions and was now less emphatic in its demonization of the West. It had officially abandoned the goal of establishing an Islamic republic in Lebanon, and the “memorandum of understanding” it has forged in 2006 with an important Lebanese Christian organization was proof of that. These changes were all part of the ongoing shift in Hezbollah’s priorities, as it moved away from the goal of becoming a pan-Islamic resistance movement and more toward a position as a narrow defender of Shiʿi interests in Lebanon.

The final moment of this transition occurred when Hezbollah entered the Syrian civil war on the side of the repressive Assad regime (an involvement that Nasrallah finally admitted in 2013, when the organization’s death toll from the conflict could no longer be hidden). At this point, Hezbollah was blatantly no longer protecting the oppressed against the oppressors. It had now sided with a dictator to defend its strategic and sectarian goals—even while it continued to protest against similar tyrannical strategies on the part of other groups. Hezbollah was now perceived throughout the Arab world as nothing more than a power-hungry, sectarian Shiʿi party, and Nasrallah was no longer lionized.

Today, Hezbollah continues in attempts to salvage its populist image, for example by drawing distinctions between its “takfiri” opponents in Syria and less radical Sunnis. In a 2014 speech Nasrallah declared that, “Takfiris want us to target our Sunni brothers, but this will not happen.” At times Nasrallah has also endorsed the conspiracy theories prevalent in the region, suggesting that the rise of the Islamic State is a US and Israeli operation intended to divide Muslims and redraw the map of the Middle East in a way that serves Western interests. None of this, however, removes the reality that Hezbollah is fighting on behalf of a repressive regime. This is a central fact that citizens in the Arab and Islamic world cannot help but be aware of.

Doubtlessly, politics is all about nuances and shades of gray, and Hezbollah is not the simplistic terrorist organization that its enemies portray it to be. It has adapted to changing circumstances in the Middle East, and while populist and anti-Western rhetoric is still prominent in its calculations, the most pressing concern at the moment for Hezbollah’s leaders seems to be the regional power struggle between its patrons in Iran and Syria and their opponents in Saudi Arabia and Turkey. Nasrallah has more-or-less openly acknowledged this dynamic, stating that, in his view, the ultimate responsibility for the proliferation of ISIS lies with Saudi Arabia.

So what does Nasrallah’s latest statement against the attacks on Charlie Hebdo mean? Western commentators should be careful in viewing this as a conciliatory olive branch. Nasrallah is well aware of how most Westerners perceive him and his organization (as terrorists), and of the benefit that anti-imperialist rhetoric can have in garnering support in the Middle East. Hezbollah’s worldview has not changed, and the Manichean distinctions of the past are still very much relevant to its political calculus. If anything, Nasrallah’s pronouncement on the Charlie Hebdo attacks should be understood as an indication that his organization no longer feels strong enough to be able to challenge Western powers. His statement is geared toward a domestic audience in Lebanon, and possibly toward Sunni Muslims within the larger region. He is continuing his campaign to demonize his enemies in Syria while appealing to moderate Muslims who are horrified that their religion has been hijacked by extremists. In this, Nasrallah is simply articulating what Muslims everywhere are thinking and saying. But he is doing so for his own personal gain.

Rola El-Husseini is Research Associate Professor at the Graduate Center of the City University of New York, MEMEAC.