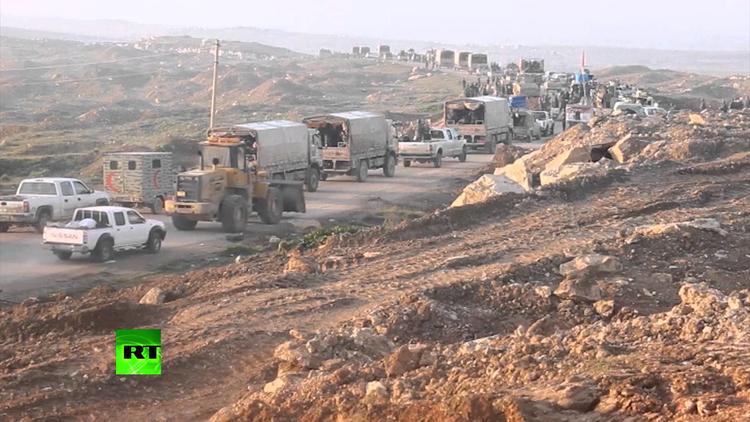 NIQASH visits the northern Iraqi town of Kharabaroot, near Kirkuk, which has become the frontline for fighting between Iraqi Kurdish military and extremists from the Islamic State group. The Kurdish forces there come from Iran, Syria and Iraq and because of this, and because of the length of time they’ve been fighting there, they’re describing Kharabaroot as “the new Kobani”.

There hasn’t been a week recently in the village of Kharabaroot, near the northern city of Kirkuk, when extremists from the Islamic State group haven’t tried to attack it.

The village, which is in the district of Al Dibis in the Kirkuk province, is one of a string of towns that the Islamic State, or IS, group managed to wrest control of when they first started to take over parts of Iraq in the middle of 2014. The Iraqi army used to be stationed here but fled in June. Since then the village has changed hands during fighting several times but since late November, Kharabaroot has been back in the hands of the Iraqi Kurdish and their allies. Kharabaroot and surrounding towns are important strategically because if the IS group controls them, they may be able to mount attacks on the Iraqi-Kurdish-controlled city of Kirkuk from here. But if the Iraqi Kurdish control these areas then they, in turn, may be able to mount attacks on the IS group’s strongholds in the Hawija area near Kirkuk.

Just as in Kobani, there are a collective of Kurdish forces defending Kharabaroot. These include Iraqi Kurdish forces known as the Peshmerga as well as Kurdish fighters from Syria and from Iran. The front line is being held by Iranian Kurds from that country’s Kurdistan Freedom Party.

Visiting Kharabaroot it is possible to get very close to the frontlines. At the most, Kurdish fighters are only 800 meters away from the IS fighters’ frontline. The two villages beyond Kharabaroot are controlled by the IS group and snipers fire on the Kurdish positions from there. Occasionally they also lob bombs. The Kurdish forces respond in kind.

“We now control the highlands around Kharabaroot and we can assure everyone that the city of Kirkuk will not be threatened by the IS fighters from the north west,” says Hussein Yazdanpana, a senior member of the Kurdistan Freedom Party. “We’re very close to the IS group here and we know about all of their movements, every day. Once we get to the next villages – we believe this will be easy – then the road is paved for the liberation of Hawija.”

Hawija is considered one of the IS group’s strongest bases in this area – it was here that peaceful Sunni Muslim protests were violently broken up by the Shiite Muslim-led Iraqi government, resulting in some deaths, which is why Hawija locals welcomed the Sunni Muslim extremist group that drove out the Iraqi army.

But Yazdanpana is confident that what he describes as the “Kobani of Kirkuk” will be the gateway to victory in the Hawija area.

One of the Iraqi Kurdish commanders in the area, Rawal Ali, told NIQASH that the key to their continued pushing back of the IS fighters was due to the union of the different Kurdish forces in the area. “We’ve damaged the militants a lot,” he boasts.

“Weapons sent by the coalition countries have also helped a lot,” Ali noted. “Especially the MILAN missiles [note: European anti-tank guided missiles] supplied by Germany. These are used for medium range targets and have played a huge role in changing the balance of power in favour of the Peshmerga here.”

But not everyone is happy with the Kurdish fighters in this area. As US-based broadcaster, Public Radio International, or PRI, reported recently, some non-Kurdish locals have also accused the Kurdish forces of destroying their houses and making it harder for them to return home.

As the broadcaster reported, one of the Kurdish commanding officers, Kemal Kerkuki, denied this. But at the same time he had “little empathy for the town’s residents”, PRI said.

“From this village they are from [the IS group],” Kerkuki told journalist Susannah George. “They’re not allowed to be here.”

Kerkuki also told PRI that, “this entire village pledged loyalty to ISIS and allowing civilians back would be the same as ceding territory back to ISIS”.

While NIQASH was in Kharabaroot the different Kurdish forces were preparing for another expected attack by the IS group. The attack never came although the sniper’s bullets kept coming the whole time.

Yazdanpana was watching the IS group’s positions carefully through binoculars. “We want the name of Kharabaroot to be as famous as Kobani’s,” he said. “I have promised our men that we are going to perform such heroic acts here that we will always be remembered – and we will not allow Kirkuk to be endangered by the Islamic State.”