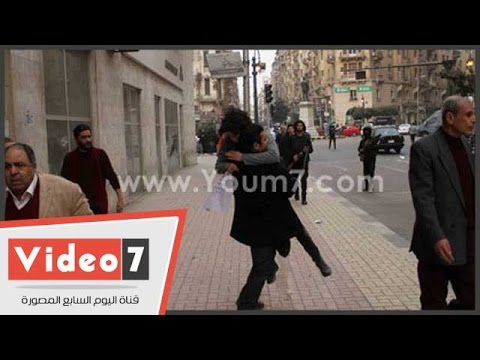 (New York) – The death of at least 20 people in Egypt during clashes with security forces surrounding the commemoration of the 2011 uprising underscores the need for an independent investigation into the authorities’ excessive use of force.A woman and 17-year-old girl were killed ahead of the January 25 anniversary while participating in apparently peaceful protests, and at least 18 died on the anniversary.

Sondos Reda Abu Bakr, 17, and Shaimaa al-Sabbagh, 32, were killed on January 23 and 24 when security forces broke up protests in which they were participating, according to eyewitnesses, media reports, videos, and photographs reviewed by Human Rights Watch. In al-Sabbagh’s case, clear evidence – including videos of the gathering before, during and after its dispersal – shows that police responded to a small, peaceful protest with excessive force, leading to al-Sabbagh’s death.

Since former Defense Minister Abdel Fattah al-Sisi came to power following a July 2013 military coup that removed former President Mohamed Morsy, Egyptian security forces have carried out widespread killings of more than 1,000 Egyptian protesters. Most of those killed were supporters of Morsy or opponents of the coup who died in Rabaa and Nahda squares in the capital on August 14, 2013 – the worst mass killings in Egypt’s modern history. In November 2013, the government put in place an anti-protest law that forbids impromptu demonstrations and gives the Interior Ministry wide authority to forcefully disperse unauthorized gatherings. On January 25, 2014, the third anniversary of the uprising, at least 64 people died across Egypt in clashes between protesters and security forces.

On January 23, in the buildup to the fourth anniversary of the uprising, police violently dispersed an anti-coup march in Alexandria, according to the Freedom and Justice Party, the Brotherhood’s political wing. Abu Bakr, a student, was participating in the march when she was shot and killed, the party said in a Facebook post. A Health Ministry official in Alexandria told the Reuters news agency that Abu Bakr was one of two people taken to hospital for gunshot wounds.

On January 24, police similarly dispersed a peaceful protest led by the Socialist Popular Alliance Party in Cairo’s downtown Talaat Harb Square, firing tear gas and birdshot, arresting at least six people and leaving al-Sabbagh dead, according to eyewitnesses and other evidence. The party had organized the march to commemorate the January 25 revolution and remember its “martyrs.”

Human Rights Watch reviewed numerous publicly available media documenting the protest, including four videos – one of which appears to show al-Sabbagh seconds after being shot – and 21 still photographs, 15 of which show the protest as it is being dispersed.

Though none of the videos or photographs show when and how she was shot, they do show that at least some of the security forces present in the square were carrying shotguns and automatic rifles. Two photos, which seem to have been taken at or around the moment al-Sabbagh fell, show armed police chasing her and others.

Hisham Abd al-Hamid, spokesman for the Justice Ministry’s Forensic Medical Authority, told the television channel Al-Hayat in a live interview that al-Sabbagh had been shot in the back and neck by birdshot from around 8 meters. Abd al-Hamid said the type of “light” birdshot that killed al-Sabbagh could have been used by police or civilians. He also said that Qasr al-Nil district prosecutors had asked him not to publish the autopsy report because the prosecutor general was issuing a publication ban on the case, according to the Aswat Masriya news service.

Osama Hammam, a photojournalist documenting the protest, wrote on Facebook that the marchers, about 30 people, carried a wreath and stood on a sidewalk after reaching the square, chanting, “bread, freedom, social justice” – a popular protest slogan. Video posted to YouTube by the quasi-official Middle East News Agency shows the protesters, also holding a large banner, marching through the street and standing and chanting peacefully near the square. Another video, which also appears to show al-Sabbagh moments after being shot, shows the crowd chanting peacefully. Police stationed in the square – where they had dispersed protesters who fired fireworks at them on January 22 – suddenly fired tear gas at the group, Hammam wrote, and the protesters began to walk away.

“Suddenly I received birdshot and began to run, not understanding anything that was happening,” Hammam wrote. “I took some pictures as I ran and when I felt the firing stop I looked and saw Shaima al-Sabbagh fall to the ground.”

Graphic videos posted to YouTube show a colleague of al-Sabbagh and another man carrying her away from the square and seeking help. Al-Sabbagh appears to be unconscious, and blood can be seen flowing from her mouth and nose.

A forensic medical report documenting al-Sabbagh’s death, a photo of which former member of parliament Ziad al-Alimi posted on Twitter, states that al-Sabbagh died after being shot in the back, causing lacerations to her lungs and heart and massive bleeding in her chest.

Security officials denied that police had shot al-Sabbagh. Assistant Interior Minister Abd al-Fattah Othman told the Agence France-Presse news agency that security forces had only used tear gas to disperse the protest. “It was a small protest that did not require the use of such weapons, only two tear gas canisters were fired,” he said.

Maj. Gen. Hany Abd al-Latif, spokesman for the Interior Ministry, said security forces were working to speedily bring al-Sabbagh’s killers to justice and told a privately owned television channel that a group of protesters caught on tape carrying rifles had fired the gunshots, according to Aswat Masriya. Abd al-Latif “warned” that Muslim Brotherhood members were using such gatherings to “drive a wedge between the police and the people,” the newspaper Al-Watan reported.

None of the publicly available media reviewed by Human Rights Watch showed any protester with a weapon or fireworks.

On January 25, Prosecutor General Hisham Barakat announced the opening of an “immediate and extensive” investigation into al-Sabbagh’s death and ordered members of the security forces who participated in the incident to be questioned. Barakat said he had also ordered the unit’s logbooks, which detail what kinds of weapons and ammunition they used, to be preserved, and that a team of criminal forensic experts had viewed the scene of al-Sabbagh’s death and her autopsy report. Prosecutors seized footage from three security cameras in the area and questioned five other eyewitnesses as well, according to a report in Al-Youm Al-Sabaa newspaper. They released all six of those arrested during the dispersal.

Prime Minister Ibrahim Mehleb said whoever was responsible for al-Sabbagh’s death would be punished and that “the state after [the] January 25 [, 2011 uprising] respects the law and applies it to everyone.”

International human rights treaties ratified by Egypt oblige the government to safeguard the right of peaceful assembly and to restrict it only when required by law and when necessary to achieve a greater public good. When dispersing a demonstration or responding to acts of violence, security forces should abide by the United Nations Basic Principles on the Use of Force and Firearms by Law Enforcement Officers.

Governments and law enforcement agencies must ensure that there is an effective review process and independent administrative or prosecutorial authorities to exercise jurisdiction in such cases. Those affected by the use force should have access to a judicial process.

Such provisions apply to all demonstrations, and Egyptian prosecutors should ensure that the other deaths that occurred before and during the January 25 anniversary are investigated fairly and impartially.

Egypt’s successive prosecutors general have failed to hold government and law enforcement officials accountable for mass, unlawful killings since the 2011 revolution. Only three low-level officers have served prison sentences for killings in 2011. No police officer or security official has been prosecuted for the mass killings of July and August 2013. A judge convicted four police officers for the August 18, 2013 fatal tear-gassing of 37 detainees at Abu Zaabal Prison, but an appeals court has ordered them retried. The official June 30 Fact-Finding Committee, established to investigate the violence surrounding Morsy’s removal, did not recommend any prosecutions.

Human Rights Watch has called for the United Nations Human Rights Council to establish a commission of inquiry to investigate widespread killings of protesters since July 2013.