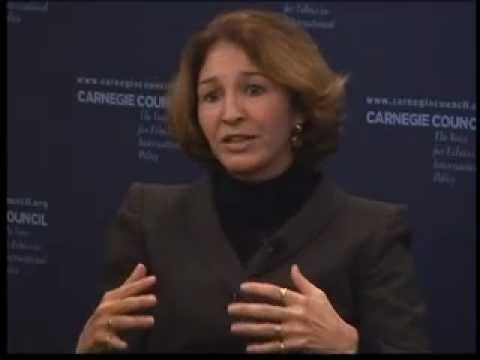 WASHINGTON (IPS) – Women are running some of the United States’ most prominent foreign policy focused think tanks, leading groundbreaking foreign policy initiatives, and reporting from the front lines of the world’s most dangerous conflict zones.

But there’s a dearth when it comes to women’s voices in U.S. media coverage of foreign policy issues, according to the co-founders of Foreign Policy Interrupted, a new organisation aimed at amplifying women’s voices in the media.

“Those who say that they make an effort to include women but cannot find any are pushing a load of B.S..” — Suzanne Dimaggio

“There is a disparity between the number of women [and men] we see commenting on foreign policy issues,” said co-founder Elmira Bayrasli to a packed room of women (and a few men) at the Washington-based New America Foundation (NAF) Feb. 4.

While some well-known female commentators are called upon by major media outlets to “check the box,” added Bayrasli, “Every six months there’s still an uproar about ‘where are the women?’”

Women are also “systematically cited less than their male peers,” wrote Wittes and Lynch in a recent Washington Post op-ed discussing the gap between the considerable number of senior women in the field and their notable absence from public discourse.

With women comprising roughly half of the U.S. population, the question becomes: Is the dearth due to a lack of qualified women for media outlets to reach out to when covering foreign policy issues?

“Those who say that they make an effort to include women, but cannot find any are pushing a load of B.S.,” Suzanne Dimaggio, an expert dialogue practitioner who runs NAF’s Iran programme from New York, told IPS.

“Today we see an ever-growing cadre of women with expertise on every aspect of foreign policy—from the traditional to the non-traditional and emerging issues,” said Dimaggio, who has been directing Track II diplomatic initiatives with several countries in the Middle East and Asia—including Iran, with which the United States has limited relations—throughout her career.

According to Bayrasli and her Foreign Policy Interrupted co-founder, Lauren Bohn—both commentators on international affairs—women are underrepresented in media coverage of U.S. foreign policy because they hold themselves to extremely high standards and because mainstream media has traditionally relied on male commentators.

“I do think there’s this sense [among women that what they send to editors] has got to be really, really good, and honestly there’s a point when the best is the enemy of the good,” added moderator and NAF president Anne-Marie Slaughter who was the director of policy planning at the State Department from 2009-11.

“There’s also males who want to hog this stuff,” said Steven Cook, a senior fellow at the well-known think tank, the Council on Foreign Relations, during questions and answers.

“I started at the Council of Foreign Relations a decade ago…I had written a dissertation and by the luck of God was offered a position and on day one I got a phone call from someone [at a major broadcasting network asking if I could] come on and talk about something I absolutely knew nothing [about],” he said.

“And my sense was, anybody could be sitting in that seat,” added Cook, who said both men and women in positions of power need to recommend their female colleagues more often.

“The reality is that what bookers, producers and editors know is a rolodex of white men and that needs to change, but we also need to help them change that,” said Bayrasli.

Beyond checking the box

Dimaggio, a mother and wife who was getting ready to board a flight to the Munich Security Conference the day IPS reached her, has an impressive resume of achievements and contributions to the world of U.S. foreign policy. But even she acknowledged that especially earlier in her career there were occasions when her abilities had been underestimated because she is a woman.

“Things are getting better, but we still have a long way to go,” she said.

“This problem won’t be resolved by only pressing those in positions of power to include more women. That certainly is a big piece of this. But, we, as women, must change our own behaviour,” added Dimaggio.

While Foreign Policy Interrupted, though still in its launch phase, exists to help women increase their media presence, at least one major U.S. media publication has been actively incorporating more women into its overall operation.

In the last three years Foreign Policy Magazine, a division of the Graham Holdings company, has gone from having one to 11 female regular columnists—half of its regular roster of 22—and its editorial staff is roughly 50/50.

“We realised that the magazine needed to be better, that there were too many of the same voices, and that our publication, which covers the ‘big tent’ of foreign policy, would not be adequately representative if it didn’t include women’s voices,” Executive Editor Ben Pauker told IPS.

Although the magazine now features an equal balance of female and male columnists, the male columnists write more often than the women, but that could be for a number of reasons.

“It’s a function of getting some of our new columnists, both male and female, up to speed,” said Pauker.

Pauker added that the magazine’s equity initiative, which will extend beyond the gender issue, is still a work in progress, but said at least anecdotally the response from readers has been “enormously positive.”

“It just makes us a better publication, there’s no other way to say it,” he said.

Carnegie from a couple of years ago: “Slaughter: Women in Foreign Policy”