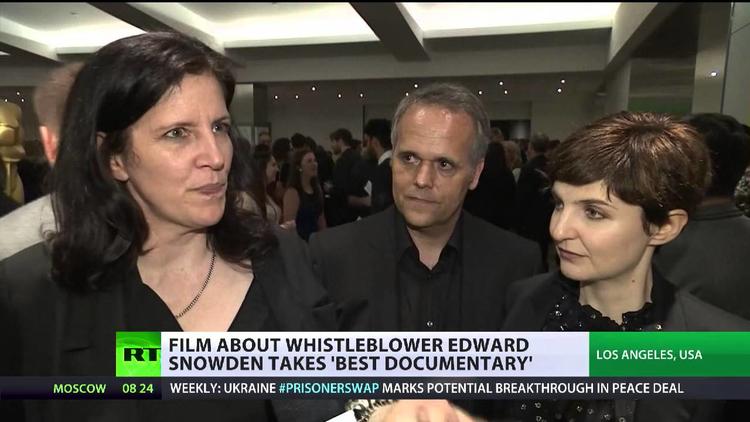 CITIZENFOUR, Laura Poitras’ riveting documentary about Edward Snowden’s efforts to shed light on gross surveillance abuses by the United States government and its partners, just won the 2014 Academy Award for Best Documentary Feature. Tonight’s Oscar win recognizes not only the incredible cinematography of Poitras, but also her daring work with a high-stakes whistleblower and the journalism that kick-started a worldwide debate about surveillance and government transparency. We suspect this award was also, as the New York Times pointed out, “a way for Academy members to make something of a political statement, without having to put their own reputations on the line.”

We’re thrilled to see Poitras take home this prestigious award. CITIZENFOUR distilled a multi-year battle against untargeted surveillance and delivered it to the world with a compelling human interest story. The work of Poitras, Snowden, and journalist Glenn Greenwald helped shape the political course of nations across the globe. That’s worth at least an Oscar.

This award means that more people will be no doubt be watching CITIZENFOUR, and thus learning about both Snowden’s sacrifice and the surveillance abuses by the United States government. For those watching the movie for the first time, there’s often a sense of urgency to get involved and fight back against mass untargeted surveillance. Here are some suggestions for getting started:

And as always, help promote freedom online by becoming a member of EFF.

We extend our congratulations to Laura Poitras and everyone who helped create CITIZENFOUR.

Disclosures: I serve on the board of directors of Freedom of the Press Foundation, a nonprofit working to champion press freedom, along with filmmaker Laura Poitras, her colleague Glenn Greenwald, and whistleblower Edward Snowden.

Edward Snowden wrote to ACLU on seeing the news on television:

“When Laura Poitras asked me if she could film our encounters, I was extremely reluctant. I’m grateful that I allowed her to persuade me. The result is a brave and brilliant film that deserves the honor and recognition it has received. My hope is that this award will encourage more people to see the film and be inspired by its message that ordinary citizens, working together, can change the world.”