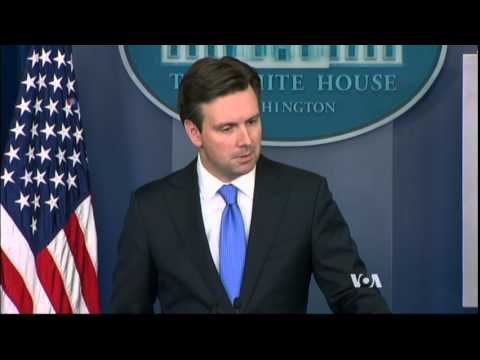 Speaking to worshippers in the Iranian capital, Hojatoleslam Kazem Sedighi praised President Hassan Rohani for his management of the talks.

Friday prayer leaders are said to receive their talking points from the office of Supreme leader Ayahollah Ali Khamenei, who has the final word on religious and political affairs in Iran.

Sedighi said Rohani had “clear and promising” stances in his meetings with senior clerics in Qom, an important center of power in Iran.

Iranian media suggested that Rohani traveled to Qom to gain the support of senior ayatollahs for a nuclear deal with officials from Britain, Germany, France, Russian, China, and the United States.

Sedighi said Rohani told the clerics Iran will not accept “humiliation,” the shutting down of nuclear facilities, or the continuation of the sanctions.

Sedighi also said the West should not interfere in Iran’s affairs or define the quantity of nuclear fuel that Iran is allowed to produce.

He was quoted by IRNA as saying: “Such blackmailing was a characteristic of the colonial era, not the Islamic Revolution period in which Iran is conquering the peaks of scientific progress.”

Some analysts say Sedighi’s comments are an effort by the Iranian establishment to prepare the public for a nuclear agreement that would rein in Iran’s nuclear program in exchange for relief from economic sanctions.

Mohsen Milani, a professor of politics and the executive director of the Center for Strategic and Diplomatic Studies at the University of South Florida, told RFE/RL that Iranian authorities are launching a “preemptive offensive” to immunize themselves from future attacks by hard-liners who have criticized the nuclear talks and accused Iranian negotiators of making too many concessions.

Milani said: “One of the major points Sedighi made is that getting the deal does not mean we will allow foreign countries to interfere in Iranian internal affairs; in other words they’re trying to immunize themselves so that nobody can claim that Iran has capitulated to the West.”

A political agreement must be agreed to by March 31. The deadline for a final comprehensive agreement is June 30.

Earlier this week, Iranian government spokesman Mohammad Bagher Nobakht was quoted by domestic media as saying that Iran is bound to conclude the negotiations by the March deadline.

“Of course, not just at the level of general agreements but we also have to reach results on the details,” he said.