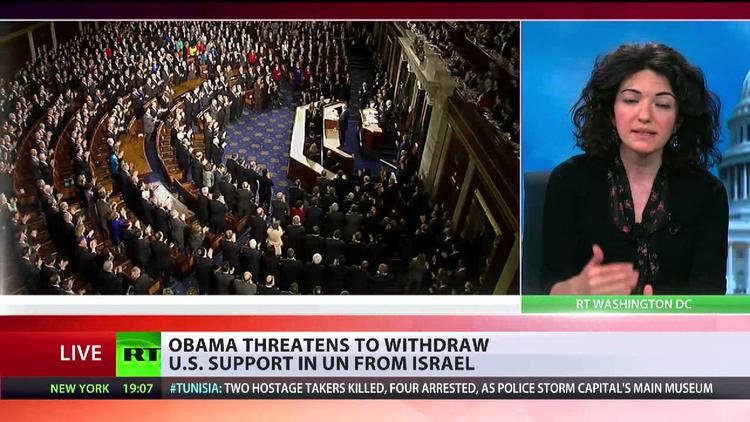 The US is “evaluating” its policy towards Israel in the wake of Benjamin Netanyahu’s re-election and campaign statements. This could involve passing a UN resolution condemning Israeli settlements.

President Obama called Israeli Prime Minister Benjamin Netanyahu
on Thursday to congratulate him on winning the March 17 election,
and used the opportunity to reaffirm Washington’s commitment to a
two-state solution that would result in a “secure Israel
alongside a sovereign and viable Palestine.”

The president also brought up Netanyahu’s campaign comment about
Israeli Arabs, a White House official told Reuters. Angered by PM
Netanyahu’s statement against Palestinian statehood, Washington
is now ready to re-access its options in US-Israeli relations.
The warning came directly from President Obama to his counterpart
in the phone call, and was later explained by the White House.

“Our policy decisions need to be reconsidered – and that’s
what we will do,” the White House press-secretary Josh
Earnest said at a briefing.

During the election, Netanyahu accused his opponents of busing
Israeli Arabs to the polls “in droves.” The White House
condemned the comments as “cynical, divisive election-day
tactics” that “erode the values critical to the bond
between” the US and Israel, spokesman Josh Earnest told
reporters Thursday.

Earnest characterized Netanyahu’s campaign promise to block
Palestinian statehood as “walking back” from Israel’s
commitments to a policy that enjoyed bipartisan support in the
US, and formed a basis for US actions on behalf of Israel in the
UN and elsewhere.

The White House spokesman was echoing the statement of his State
Department colleague. “Based on the prime minister’s
comments, the United States is in a position going forward where
we will be evaluating our approach with regard to how best to
achieve a two-state solution,” State Department spokeswoman
Jen Psaki told reporters Wednesday. “But that doesn’t mean
that we’ve made a decision about changing our position with
respect to the UN,” she added.

Foreign Policy magazine reported Thursday that Washington had
told its allies it would continue to block any measures against
Israel in the UN Security Council in case opposition candidate
Isaac Herzog won the election, but “signaled a willingness to
consider a UN resolution in the event Netanyahu was
re-elected.”

“The more the new government veers to the right the more
likely you will see something in New York,” FP quoted an
anonymous Western diplomat as saying.

The magazine speculated that Washington might abstain from voting
on the UN resolution condemning the construction of Israeli
settlements in the West Bank, thus letting it pass. “I could
see that as a possibility,” Ilan Goldenberg, former member
of the Obama administration’s Mideast peace team told FP.

The rift between US and Israel is more based on a clash of
personalities rather than fundamental bilateral relations Eric
Draitser, independent geopolitical analyst, told RT.

“There has definitely been a rift that has grown in the personal
relations between Netanyahu and Obama; between the Israeli regime
that he leads and the Obama administration. Part of it has to do
with extreme racism and belligerent rhetoric.”

>US officials insist they would never cut military aid to Israel, nor would they support
Palestinian membership in the International Criminal Court.
“But they feel no similar inhibition about settlements, which they consider utterly indefensible,” liberal columnist Peter Beinart wrote in the Israeli daily Haaretz on Thursday.

Beinart claims that top Obama officials “loathed”
Netanyahu before, but the Israeli PM’s comments about Palestinian
statehood, settlements, and Arab voters in particular, “drove
them to new levels of fury.”

Another sign that the US may rethink being “Israel’s
shield” was the recent appointment of former Clinton adviser
Rob Malley as the White House’s point man on Israel, reports
Politico. Malley had been forced to resign from the Obama
campaign in 2008, after Jewish groups dubbed him an
“Israel-basher” due to his contacts with Hamas, considered by
Israel and the US to be a terrorist organization.

Domestic politics may play a role in the White House’s
calculations as well. “The worse relations between the White
House and Israel get, the more Hillary can appease the American
Jewish establishment by running to Obama’s right, and promising
to repair the rift,” an unnamed US official told Beinart.

But as US enters the election cycle, the US – Israeli
“fundamental relationship” is to be observed.

“Whatever the new incoming administration is going to be they
will be moving further and further to the right,” Draitser
said, which means realigning itself with the “powerful”
Israel lobby, or standing “shoulder to shoulder with
Israel.”

Netanyahu has reportedly already softened his stance on
Palestinian statehood, saying he would be open to it “if
circumstances improve.”

The White House, however, appears unwilling to let him walk back
the campaign phrasing. “Words do matter,” said Earnest.

“Something fundamental has changed,” Beinart wrote of
the mood in the Obama administration, adding that, “officials
stress that they retain a deep, visceral commitment to the
survival of the Jewish state. But they foresee terrible days for
Israel ahead.”

RT: “Obama threatens to withdraw US support for Israel in UN”