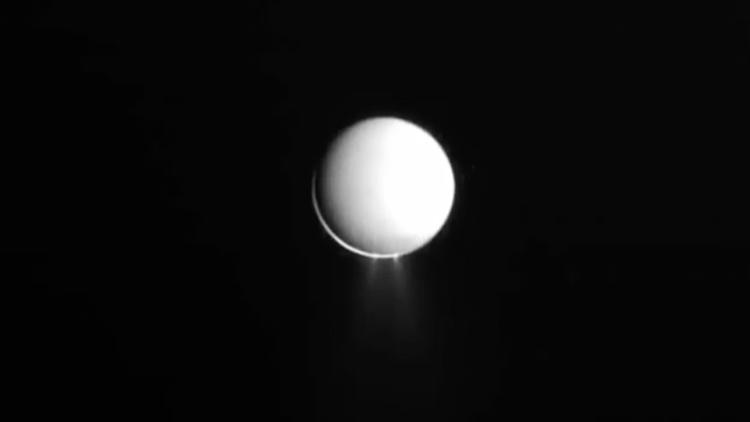 By Andrew Coates | (The Conversation)

The Cassini mission that has investigated Saturn since 2004 has revealed much about the giant planet and its many moons. Perhaps most tantalising is the discovery that the moon Enceladus is the source of strong geysers ejecting plumes of water and ice.

A new study of Cassini data published in Nature by Hsiang-Wen Hsu and colleagues reveals these plumes are laced with grains of sand. This indicates that hydrothermal activity may be at work in Enceladus’ sub-surface ocean, and propels this tiny moon into the extremely exclusive club of locations that could harbour life.

The club’s only current member is Earth, of course – although it’s very possible that Europa, one of Jupiter’s moons, is, like Enceladus, also a candidate. What they have in common is that they host liquid oceans of salty water that exists in contact with a rocky, silicate seabed from which the oceans can absorb complex minerals and elements.

A bit of a geyser

With a diameter of just 500km Enceladus is nevertheless the sixth largest of Saturn’s more than 60 moons, orbiting at a distance of just two planet-widths. Cassini has shown that Enceladus is the source of huge geysers of neutral water-rich gas and ice grains erupting at a rate of 100-300kg per second. This makes Enceladus the second most active object, after Jupiter’s moon Io which ejects one tonne per second of sulphur-rich material.

Gravity measurements have shown that there is at least a local and possibly a global ocean under Enceladus’ icy crust, and some of the emitted grains are rich in sodium salt, which indicates the presence of a salty ocean. Now we also discover that some are silicate-rich, and analysis shows that these may have been produced close to hydrothermal vents at temperatures above 90°C. This raises the interesting comparison with hydrothermal vents on Earth, which may have played a role in the origin of life on our planet.

The recipe for life

For life as we know it to exist, four key ingredients are important: liquid water; the right chemistry involving the elements carbon, hydrogen, nitrogen, oxygen, phosphorus and sulphur; a source of heat; and enough time for life to develop. While we know these conditions exist on Earth, planetary research throughout the solar system shows that it may exist on other objects too, and the details from this paper pushes Enceladus towards the top of the list.

We know liquid water oceans exist on several objects in our solar system. These include Earth with its surface oceans, and Jupiter’s moons Europa, Ganymede and Callisto, and Saturn’s moons Titan and Enceladus where the oceans are below the surface. Water has also played a vital role in Mars’ history: Geronimo Villanueva and colleagues recently showed that there may have been enough water on Mars to cover the planet in an ocean 137 metres deep around 3.8 billion years ago –- about the time when life was starting on Earth.

There may also be water on the dwarf planets Ceres and Pluto, Neptune’s moon Triton, and several other objects in the solar system – but only further investigation will tell. Two other objects have lakes and oceans, but not of water. Titan has lakes of methane and ethane, for example – the only extraterrestrial object we know of with liquid on the surface – and volcanic Io has a subsurface ocean of liquid magma.

A shortlist for extraterrestrial life

So where are the best places to look for life in our solar system? The short list now seems to be Mars, Europa and Enceladus. At Mars the most likely time for life to have existed is 3.8 billion years ago when water was present, so the ESA-Russia ExoMars rover due for launch in 2018 will focus on drilling 2m below the present surface’s harsh oxidising and radiation-rich environment to search for buried evidence from the past. It carries our PanCam instrument which will provide context for the mission.

As for right now, Mars may be a less good candidate for life. Following a catastrophic collision about 3.8 billion years ago the planet underwent massive climate change, volcanic activity stopped, and the planet’s magnetic field disappeared. But the recent confirmation by Curiosity of the presence of methane is tantalising. At Europa, ESA’s JUICE mission and the proposed NASA Europa Clipper may bring more clues in the 2030s, but further missions to Enceladus have yet to make it past the proposal stage.

Nevertheless, this leaves Europa and Enceladus as prime sites where conditions may be suitable for life to exist now – but who knows which other solar system objects could be the next to join the club.