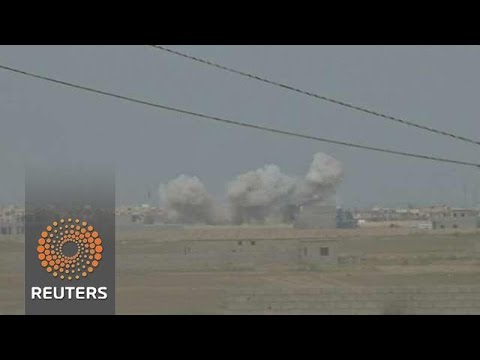 By Paul Rogers | (The Conversation) –

So it has begun – the US is bombing Tikrit, once a stronghold of Saddam Hussein’s regime and now held by Islamic State militants. Strategically and symbolically important, Tikrit has been a fierce battleground for weeks, as Iraqi government troops and Shia militias have fought fierce street battles for control of the city.

But as the Pentagon itself confirmed, the Iraqi government and militia assault on Tikrit has stalled. Given that the Iraqi government had confidently predicted that its forces, boosted by Shia militias and by Iranian assistance, would be able to retake this key city without the support of US air power, this is galling indeed.

The nearly 30,000 personnel assigned to take back the city, mostly Shia militias, face hundreds rather than thousands of Islamic State paramilitaries, mostly holed up in relatively small parts of the city – but who have proved extremely difficult to overcome.

After a temporary halt had been called by March 21 to allow the forces to regroup, US surveillance flights over Tikrit began on March 24. This immediately changed the tone of what the government in Baghdad had hoped would be an Iraqi success without US intervention (albeit with Iranian backing).

Almost inevitably, within a day, the US had made a show of its muscle with 17 air attacks – the beginnings of what will most likely be a sustained air assault that will be maintained until Tikrit falls, or rather until the few Islamic State paramilitaries left in the city filter away to continue their fight elsewhere.

US and whose army?

Now, though, the situation has changed yet again, with reports of three major developments as the US air attacks went into a second day.

Firstly, nine Iraqi soldiers were accidentally killed in a US air strike, casting an immediate doubt over over military co-ordination, intelligence gathering or both.

Secondly, and in an entirely unexpected move, thousands of the Shia militia fighters that are key to the Iraqi Army‘s operations announced they were boycotting the operations in protest at direct US involvement. Three of the four main militia groups have taken this action and while the US forces may prefer a joint operation with the “official” Iraqi forces rather than with Iranian-backed irregulars, the precipitate nature of this decision leaves the regular Iraqi troops exposed.

Thirdly and most remarkably, some Shia militia elements have in fact threatened to attack any US personnel they find in the area. This essentially confirms that the war against Islamic State in Tikrit is now a joint US/Iraqi Army operation, and not an Iraqi venture with Shia and Iranian backing – the precise opposite of what the Habadi government had wanted and claimed only three weeks previously.

Not that this should be a great surprise, since there is a strong suspicion that the Shia militia “boycott” has more to do with their utter failure to push back the Islamic State paramilitaries. The Iranians must be highly embarrassed that their close allies in the Iraqi Shia militias, with all the advice and help they’ve had from the Iranian Revolutionary Guard Corps, have essentially been fought to a standstill by a tiny force of besieged defenders.

Going on the experience of what happened in the final days of the siege of Kobanê in northern Syria, we can make a guess at what will happen. The heavy use of US air power will destroy those parts of Tikrit where the few Islamic State paramilitaries remain, Islamic State will withdraw some time in the ensuing few days, the Pentagon and Baghdad will claim victory – and there will be not much left of large parts of the city.

Meanwhile, Islamic State will continue its actions elsewhere in Iraq, as with the over-running of the Iraqi Army’s 26th Brigade HQ at Thar Thar near Baghdad.

There will be some very serious rethinking in Baghdad and Washington over the whole conduct of this war. Serious talk of an immediate and successful assault on Iraq’s second city of Mosul this spring is dying away. But the more pressing issue is the state of the complex US/Iraqi/Iranian relationship, precisely at a time when Washington and Tehran may be drawing closer to a hugely important deal on the nuclear issue.

All this is happening alongside a sudden surge in conflict in Yemen, with Saudi Arabia leading the way with air strikes and Arab leaders meeting in Sharm-el-Sheik to discuss large-scale co-ordinated action against the Houthi rebels now consolidating power in Sanaa.

Already the Saudi air action has been heavily reliant on US intelligence sources, and if this develops into a full scale conflict, US-supplied weapons will be at the heart of it.

The sheer complexity of the faultlines is starting to show, principally on the Saudi/Iranian axis, and that means it’s impossible to predict how the war in Iraq will develop. In the short term, though, what it does mean is that yet one more aspect of the war is involving heavier US military power – and that my be exactly what IS wants.

Islamic State may have few problems with promoting its resistance to what it presents as Shia aggression, but its message is much more appealing when it can point to the “threat” from the far enemy of the US and its “assault on Islam”.

So even if Tikrit falls, the strategists in Raqqa will not be too unhappy.

Paul Rogers is Professor of Peace Studies at University of Bradford