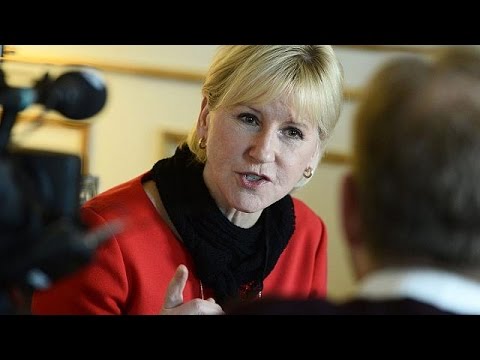 First, the new left wing government in Sweden cancelled an arms sale to Saudi Arabia, even though Prime Minister Stefan Lofven favored it. (He had been a union rep friendly to the Swedish arms industry). Foreign Minister Margot Wallström put her foot down, however, and won the argument. She had been vocal in criticizing the Saudis for jailing and flogging blogger Raif Badawi, tweeting that this attempt to stop a modern form of expression must be halted.

Then the cancellation of the arms sale and the open criticism of Saudi human rights violations has provoked the Saudis to withdraw their ambassador from Stockholm. The Gulf Cooperation Council supported the Saudis, on the grounds that Saudi law is based on Muslim canon law or sharia. However, in fact, Saudi law is mainly what the king, an absolute monarch, says it is. The Qur’an says that “there is no compulsion in religion,” which I should think makes punishment of crimes of conscience like blogging un-Islamic.

You wonder if part of the friction here is between a strong female leader like Wallström and the geriatric male chauvinist leadership of Saudi Arabia, who won’t even let women drive.

Sweden has one of the best records in Europe on avoiding carbon emissions and going green over time. It wants gasoline-free transport by 2030

But in fact, nowadays Sweden still imports about 287,000 barrels of petroleum a day. That is bad. It makes Sweden dependent on countries like Russia and Saudi Arabia.

But its really big import item in fossil fuels is petroleum for autos and trucks and trains (71% of its hydrocarbon imports)– precisely the commodity of which Saudi Arabia is master.

Given this diplomatic and trade break, Sweden should adopt an even more ambitious goal, like that of Scotland and go green by 2022. And, it should above all get serious about green transportation, moving to achieve its stated goals even more quickly and robustly than it is now doing. In short, it should move quickly to electric cars and renewable energy to fuel them.