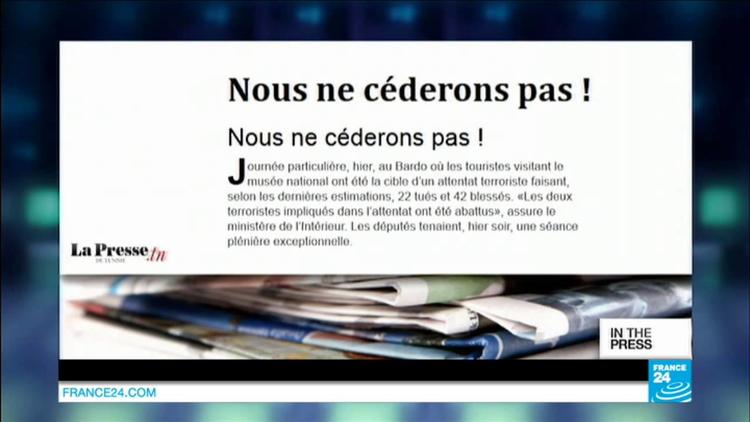 On Wednesday afternoon, gunmen attacked the Bardo Museum in Tunis, killing at least 20 people. Many more people sustained serious injuries. The casualties included foreign tourists and Tunisians, although most victims were foreigners. Tunisian leaders and citizens strongly condemned the attack. Foreign governments and human rights organizations offered similar condemnations, while also pressing Tunisian leaders to reject heavy-handed responses and to remain committed to the rule of law. As Eric Goldstein, Human Rights Watch Deputy Director, Middle East and North Africa Division, stated, “Tunisian authorities should show through their response that their commitment to the rule of law is unshaken.”

Despite such statements, the effects of this attack will reverberate throughout Tunisian politics. Tunisian President Beji Caid Essebsi faces an especially difficult test. Essebsi, a Minister of the Interior during Ben Ali’s authoritarian regime, must show political restraint and respect human rights to retain democratic legitimacy. Restraint will likely prove challenging given Essebsi’s previous position and his need to deliver on campaign promises of restoring stability and eliminating extremism. Similarly, secularist politicians may use this attack to reiterate their argument that Islamist politics are incompatible with democracy, particularly as the ISIS threat to North Africa increases and large numbers of Tunisians continue to join ISIS in Syria and Iraq.

Such a move would be a mistake. Instead, Tunisian leaders and policymakers should recognize that extremist violence has little if any connection to moderate Islamist groups such as Ennahda. Instead, this attack suggests a much more unsettling point by illustrating the inability of the current secular-led government or the moderate Islamist Ennahda to prevent extremist violence. While this attack was the first incident of massive civilian violence since 2002, when al-Qaeda operatives killed nineteen people by bombing the Ghriba Synagogue in Djerba, extremist groups have killed about 40 security force personnel since the 2010–2011 Revolution. Security concerns plagued Ennahda after it won 89 of 217 seats in the 2011 Constituent Assembly election. These concerns culminated in the assassinations of leftist politicians Chokri Belaid and Mohamed Brahmi, which enraged the country and nearly derailed Tunisia’s democratic transition.

Secular political parties including Nidaa Tounes capitalized on the public’s dissatisfaction with Ennahda’s handling of extremist violence as well as other shortcomings to win the 2014 elections. Nidaa Tounes and Ennahda now control parliament through an unlikely coalition. This attack will put stress on this uneasy relationship, although both parties have called for the swift adoption of a draft terrorism law.

In addition to political tension, Tunisia faces difficult security issues. On Thursday, Tunisian Minister of the Interior Rafik Chelli announced that the two gunmen responsible for the attack received training at a jihadist camp in Libya. Importantly, Chelli also noted that extremists recruited the gunmen at Tunisian mosques before they travelled to Libya last September. Although they received training in Libya, the gunmen remain unlinked to any militant group, which raises additional concerns about “homegrown” extremists acting outside of established militant organizations. Accordingly, Tunisian security forces face an extremely difficult situation, as Libya continues its descent into armed conflict and as militant groups such as Ansar al Sharia and Okba Ibn Nafaa operate in the Chaambi Mountains along the Algerian border. Some analysts even suggest that the increased pressure Tunisian security forces applied to militants within the Chaambi region may have contributed to the museum attack, as militants sought to strike a soft target with symbolic importance.

Tunisian politicians had already prioritized stronger counterterrorism capabilities, but many political leaders called for immediate improvements following Wednesday’s attack. This response is understandable, and perhaps necessary, but better counterterrorist services will not improve Tunisia’s struggling economy, which remains significantly depressed following the Revolution. While the link between poverty and extremism is hardly a casual relationship, within Tunisia, extremist recruiters have used the struggling economy as a valuable recruitment strategy. As University of Oxford historian Mark Almond noted the day following the attacks: “The fundamentalists consider poverty to be their best recruiting-sergeant; the recession, which hit post revolution when the Europeans left, is radicalizing young Tunisians.”

The promise of stronger security forces also raises the unsightly specter of the Ben Ali regime, which justified the repression of civil society and the harsh treatment of political opponents through a “fight against terrorism.” While the current government would almost certainly refuse these tactics, detainee abuse remains a legitimate concern and Tunisian human rights attorneys report that those returning from fighting abroad often experience torture upon their return. Likewise, pledges of support from “Western” governments to improve Tunisian security forces, though again perhaps necessary, could provide extremists another key recruiting tool.

Perhaps most of all, this attack demonstrates the immense challenges that Tunisia faces as it continues its democratic transition. While calls for unity and improved economic opportunity are important, these pronouncements will not change the daily life of most Tunisians. Moreover, this attack and the influx of Tunisians joining ISIS stand in stark contrast to the peaceful vigil that followed the attack and the stubborn persistence of Tunisian politicians remaining faithful to democratic ideals. Rather than a simple choice between violence and peace, this contrast demonstrates that inclusive, democratic societies will always face challenges from extremist groups unwilling and uninterested in joining a society premised on a respect for others.

The Bardo Museum attack was a cowardly act of intolerant militants and those responsible should be held accountable. Nonetheless, larger issues such as unemployment—particularly youth unemployment—remain unresolved. While this attack was undoubtedly a tragedy, structural issues such as unemployment and corruption stemming from the Ben Ali regime present a greater long-term threat to Tunisia’s security and its fragile democracy. Since the Revolution, politicians and citizens have rejected violence and demonstrated their ability to compromise on key points. Whether this success can continue absent economic improvement remains uncertain, but refusing to equate moderate Islamist groups such as Ennahda with violent extremists or to blame them for such violence is another important step in this process.

John Hursh is an independent researcher and consultant specializing in North Africa. He completed an LL.M. degree at McGill University in 2014, writing a thesis: “Women’s Rights and Women’s Land Rights in Postcolonial Tunisia and Morocco: Legal Institutions, Social Discourse, and the Need for Continued Reform”

France24: “Fears for Tunisia and its economy following terrorist attacks”