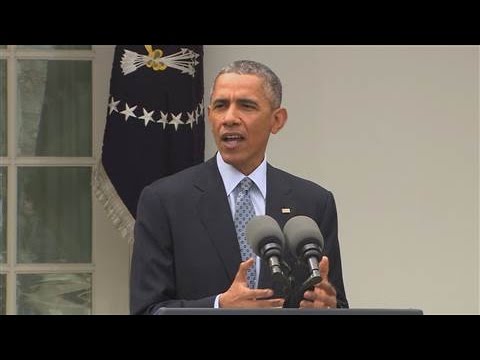 President Barack Obama’s negotiations with Iran to ensure that its nuclear enrichment program remains purely civilian, for generating electricity, ought to be bipartisan in spirit. Achieving that goal would benefit all Americans.

The GOP presidential field in particular and the Republican Party in general have decided to treat the Iran negotiations the way they did Obamacare, as the unfortunate apparent achievement of a president they had determined to emasculate, which needs to be abrogated yesterday. In short, they are making the Iran talks a partisan domestic issue, refusing to recognize it as a diplomatic victory.

Some of the Republican obstreperousness derives from a desire to please one man: Sheldon Adelson, the sleazy casino magnate who made his pile in unsavory ways in Macao, China and who threw $100 million of his own money behind Newt Gingrich and then Mitt Romney in 2012. As a result of recent Supreme Court rulings such as Citizens United and the striking down of campaign finance reform by that theorist of capitalist dictatorship, John Roberts, cranky individual billionaires like Sheldon Adelson have abruptly been awarded the right to buy and sell American presidents. Chris Christie traipsed off to try to please Adelson in Nevada and called the Occupied Territories of the Palestinian West Bank and Gaza Occupied Territories, and was taken to the wood shed by Adelson, who wouldn’t be able to see oppressed persons if they were carrying him in a palanquin.

Sen. Rand Paul (R-KY) has carefully managed to avoid saying anything about the deal outlined this week. His basic reply is, “no comment.” This position is a little surprising, since last January at a Presidential forum he openly let the warmongers among his rivals have it with both barrels. Carol Giacomo wrote in the NYT that Rand asked chickenhawks Marco Rubio and Ted Cruz,

So the reason Mr. Paul is hiding from the press on the Iran issue is that he agrees with President Obama’s approach but does not want to let his GOP competitors slam him as an isolationist peacenik.

Unfortunately, Paul has not been consistent. He signed the infamous letter of 47 senators to Ayatollah Ali Khamenei, intervening in the midst of the talks in precisely the way he warned against last January. And now he is just quiet.

Scott Walker, the far right wing governor of Wisconsin, pledged to “blow up” any deal with Iran if he became president, regardless of what the Europeans thought of that, and to do it on his first day in office.

Walker doesn’t seem to understand that releasing Iran from its obligations under the Kerry-Zarif deal while undermining international sanctions against Iran would put the ayatollahs in the catbird seat! Ignoring the Europeans may play well as a sound bite to conservatives, but the Europeans would take revenge for being jerked around by refusing to revive sanctions against Iran. Iran is a country of 77 million people with a gdp of some $400 bn., and as a market has the same attractions as Poland. European firms want to invest in Iran, and have only been held back by a their governments, who want to give the USA a chance to succeed in diplomacy. If the US demonstrates that it has no interest in diplomacy, why should European companies deny themselves a primo investment opportunity? Hint: They won’t.

And if Europe bails on the sanctions, they become irrelevant. Scott Walker’s is a good path toward taking off all restraints on Iran except unilateral American sanctions, which cannot in and of themselves have much effect. Even European sanctions on Iran have largely been offset by the country’s increased trade with China.

Sen. Marco Rubio (R-FL) called the Iran deal “troubling.” Last January, he accused the Obama administration of facilitating a nuclear weapon for Iran: “In five years we’ll just build them one.” But Rubio did not seem actually to have grasped the details of this deal as explained in the White House talking points. He maintained that the Fordow facility near Qom would be allowed to continue to enrich. That isn’t what the White House said. He said that thousands of centrifuges would be allowed to spin. Yes, but there is no way short of invasion and occupation to dismantle those centrifuges. Obama is shrinking their number from 19,000 to 5,000 according to the WH talking points, which would make it impossible for Iran to go for broke and enrich enough fissile material for a quickie bomb.

Sen. Ted Cruz (R-TX), for all his bluster, did not actually threaten to vote down the Iran deal just announced. He did insist that it be cast in the form of a treaty and voted on by the senate. But 84 percent of international agreements signed by the US are simply presidential initiatives; treaties are fairly rare. Nor is there an obvious way for him to get his way on this matter, since the GOP does not have a filibuster-proof majority in the Senate on the Iran negotiations (even conservative Democrats are likely to side with Obama here).

So, just to recap: The usually flamboyant Ted Cruz has been more cautious and circumspect than Scott Walker in his reaction to the Iran deal. Walker used the unfortunate phrase “blow up” about a nuclear negotiation and does not seem to understand how international sanctions work, nor that unilateral US sanctions wouldn’t much hurt Iran. Marco Rubio needs new glasses, since he seems not to be able to read the fine print of the agreement.

And Rand Paul is AWOL on one of the most important issues facing the country.

The Republican presidential field is not ready for prime time regarding the Iran deal.

As for the rank and file GOP congress representatives, such as Louis Gohmert (R-TX), they just raved like lunatics, talking about bombing each and every centrifuge in Iran. But then they were going to fix Iraq by bombing it, too.