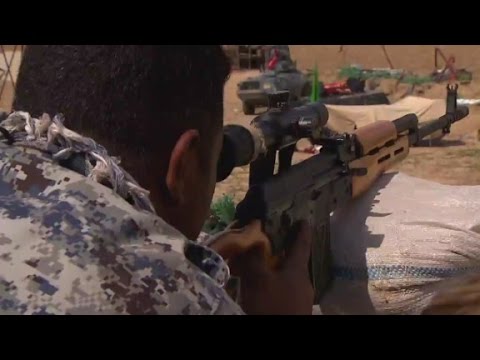 U.S. Vice President Joe Biden has said the momentum of Islamic State (IS) militants in Iraq has stalled.

“ISIL’s [IS] momentum in Iraq has halted, and in many places has been flat-out reversed,” he said in Washington on April 9.

He cautioned, “There’s still a long fight ahead — I don’t want to paint an overly rosy picture.”

Biden’s comments came after the Iraqi government declared victory over the Sunni group in the city of Tikrit on April 1. Shi’ite militias and U.S. air power drove IS militants out of the city, which had been held by the group since June.

The vice president said that IS’s “aura of invincibility has been pierced.”

Biden praised Iraqi Prime Minister Hader al-Abadi for ordering Shi’ite paramilitaries to leave the predominately Sunni city after reports of looting and destruction by the forces.

The remarks came before the Iraqi prime minister’s scheduled visit to Washington to meet with U.S. President Barack Obama on April 14.

It will be Abadi’s first visit to the United States since becoming prime minister in August.

The vice president said that the IS threat has managed to unite the Sunnis, Shi’as, and Kurds in Iraq.

“The irony of all ironies is that Iraq actually helped form its government because of ISIL,” he said, referring to the coalition government formed in September 2014.

Biden called for dividing Iraq into three autonomous regions based along ethnic lines in 2006 and 2007 while serving as a U.S. senator.

His past stance on Iraq earned him domestic criticism from House Speaker John Boehner (Republican-Ohio), whose spokesman said that “his record of poor judgement and failure makes him a laughable choice as the face of the administration’s efforts in Iraq” in a statement released after the speech.

CNN: “Iraq prepares for next offensive against ISIS”