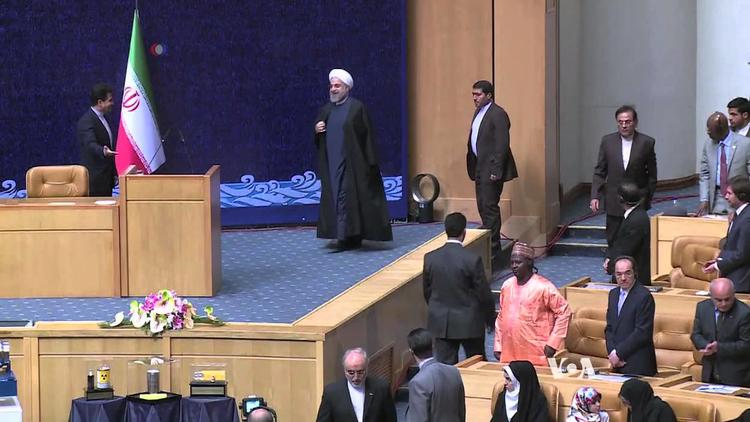 “What should I wear, now that we will be hanging out with the Americans?”

It’s a joke that was making the rounds among Iranians after a framework nuclear deal with world powers was hammered out after lengthy negotiations in Switzerland. And it reflects the wish of many Iranians for a normalization of ties with the country their leaders have branded “the Great Satan.”

But that wish is not likely to come true anytime soon.

Even in the event that a deal can be finalized, analysts and former diplomats don’t expect a shift in the ties between the two countries that have exchanged accusations and threats for more than three decades.

John Limbert, a former diplomat at the U.S. Embassy in Tehran, says that a nuclear deal would demonstrate, to both sides, that there’s a better way of dealing with the relationship.

Since the 1979 revolution, direct contact between senior officials of the two countries has been extremely rare. But, in recent months, intense bilateral talks between U.S. Secretary of State John Kerry and Iranian Foreign Minister Javad Zarif have become routine. The directs contact follows a historic telephone call between U.S. President Barack Obama and Iranian President Hassan Rohani in September 2013 .

Former Iranian lawmaker Fatemeh Haghighatjoo says such interactions and, ultimately, a nuclear deal could help break down the wall of mistrust that has divided the long-time foes.

“Officials from the countries will gain a better [understanding] of each other,” Haghghatjoo said.

Vali Nasr, the dean of the School of Advanced International Studies at Johns Hopkins University and a former State Department foreign-policy expert, says the nuclear negotiations that have been going on for more than a year have already transformed relations between the two states.

“The taboo of no contact with the United States has been broken,” Nasr said.

“They had never entered into a joint agreement that they both had signed,” he said, noting that this barrier was crossed with the signing of the Joint Plan of Action (JPOA) in November. Now, while the current framework agreement is not a signed document, “nevertheless both have endorsed it,” Nasr added.

Nasr says that a comprehensive nuclear agreement does not necessarily point to a broader relationship. But he says that the achievement “would lay the basis for a potentially broader set of relationships and engagements in other spheres.”

A deal, some observers have argued, could embolden Iran to pursue a more aggressive regional role. The Islamic republic already has considerable influence in countries such as Iraq, Syria, Lebanon, and among Yemen’s Shi’a. But the argument goes that it could invest more into its efforts in those countries if it were freed of crippling financial sanctions imposed over its nuclear activities.

Alireza Nader, a senior Iran analyst at the Rand Corporation, says Iran’s future regional policies will depend on which faction of the Iranian establishment will be strengthened by a nuclear deal: the moderates who believe that more openness and better ties and engagement with the world, including the United States, is the way to go, or ideology-driven hard-liners who see a rapprochement as being against their interests.

“Iran could have more resources, but if it seeks to end its isolation and open its economy, then it might have to be less aggressive in the region, “Nader said.

Nader believes that if a nuclear deal were signed, then the U.S. and Iran could even explore “discrete areas of cooperation” in Afghanistan and Iraq where the two countries have common enemies: the Taliban and the Sunni militant group Islamic State (IS).

“We shouldn’t have high expectations, but given Iran’s aging leadership and the potential for change, a nuclear deal is a first promising step.”

Despite the common interests, the United States and Iran have been also fighting for influence and power in the region where Washington’s allies, including Israel and Saudi Arabia, have been also taking measures to counter Iran’s influence.

A nuclear deal should open up the possibility of talking about other issues where the two sides share differences and common interests, says Limbert, who went on to serve as deputy assistant secretary of state for Near Eastern affairs.

He recalls that when he was serving in the State Department just a few years ago, “when we talked about talking to the Iranians about Afghanistan, or Sunni-based extremism or narcotics, the answer was: ‘We can’t do that until we have some resolution of the nuclear issue.'”

Gary Sick, a scholar at Columbia University who served on the U.S. National Security Council, says the ice has been broken and both countries have indicated that they’re willing to deal seriously with each other.

“That is a very hopeful thing,” says Sick, while adding that he could see a day where the two countries could work together based on mutual interests.

“We do have a lot of serious issues to talk about,” he says. “We’re getting out of Afghanistan, that’s a subject that’s of great interest to us and to Iran about stability there. The whole question of fighting [IS] — Iran is doing it and we’re at least indirectly supporting them in the process.”

But, he adds, “If we were able to talk to each other and coordinate our activities — that would be a huge plus.”

Nasr believes that, for now, the two countries are likely to remain competitors. The opening to a relationship, he says, is not firm or big enough to lead to a strategic alignment.

Ultimately it’s Supreme Leader Ayatollah Ali Khamenei who has the last say in all state affairs in Iran, and, speaking in Tehran on April 9, he had serious concerns about the nuclear talks.

But he also appeared to leave the door open to future engagements should the two sides manage to reach a lasting nuclear deal.

“If the other side refrains from its normal devious actions, this experience can be continued on other issues,” Khamenei said.

The Iranian leader added:” If we see that once again they repeat their devious actions, it will only strengthen our previous experience of not trusting America.”

Announcing the nuclear framework agreement on April 2, Obama said that even if a deal is finalized, it will not end “the deep divisions and mistrust” between the two countries.

Obama said Washington’s concerns will remain “with respect to Iranian behavior so long as Iran continues its sponsorship of terrorism, its support for proxies who destabilize the Middle East, its threats against America’s friends and allies, like Israel.”