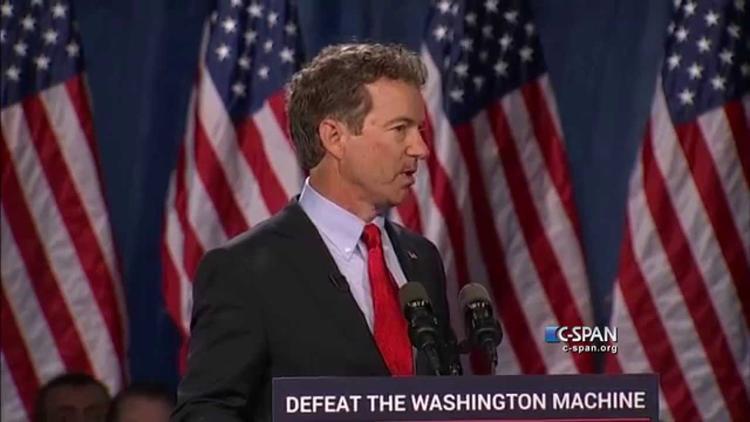 Senator Rand Paul (R-KY) declared his candidacy today to be the Republican standard bearer in the 2016 election.

So what would a Rand Paul presidency look like with regard to Middle East policy? Although Paul has a reputation as a Libertarian non-interventionist, he isn’t actually either one. As he has admitted, he supported the Afghanistan War in 2001.

Let’s take Syria. Sen. Paul was opposed to the planned Obama administration intervention in Syria in fall, 2013 after a unit of the Baath regime was alleged to have deployed chemical weaponry against rebels in Ghouta near Damascus, killing some 1100 people. Paul said that an American intervention would create a “jihadist wonderland.” In part, his opposition had been rooted in a demand that Obama get congressional approval before going in. But even when Obama looked as though he would ask for a congressional vote, Paul remained opposed, unsure that the rebels in Syria, many of them become extremist radicals, would be better for US interests than the government of Bashar al-Assad.

But then a year later when Obama decided to bomb Daesh (ISIS or ISIL) positions at Raqqa in Syria, Rand Paul supported the move. However, he did not approve of the second part of Obama’s strategy, of training pro-Western freedom fighters to take on both Daesh and the al-Assad regime.

At the same time, Rand Paul initially opposed an American reentry into Iraq in June of 2014 when Daesh took Mosul and Tikrit. Then he gradually came around to supporting an air campaign against them in Iraq.

Can we conclude anything from this apparent flip flop? It seems clear first of all that Rand Paul is not anti-war in principle. He supported the Afghanistan War and he supports the current allied bombing campaign against Daesh / ISIL. He appears not to see the Baath government of al-Assad in Syria as a threat to the US, and so opposes an intervention against it, which he thinks would anyway backfire in favor of Muslim extremists. On the other hand, he appears to see Daesh as a threat to the US, and so backed Obama’s bombing campaign against it in Syria. But he’s against supporting land forces there.

In some ways this set of stances resembles those of Obama himself. Rand Paul, like Obama, supports those wars he sees as key to US security, like Afghanistan, but not elective interventions not clearly defensive in character (Saddam’s Iraq). Like Obama, Paul appears to have a preference for air interventions over infantry ones. One big difference between the two men is that Rand Paul

Rand Paul also, however, has to be seen as inconsistent. He was against bombing Syria and Iraq before he was for it. His first instinct is to avoid involvement and to criticize those who want to intervene, but then over time he seems to get pulled in by the same logic that drove others to favor action.

I think that is a problem– as a senator you might have the luxury of changing your mind. But openly flip-flopping on important issues as president would confuse allies and embolden enemies.

Rand Paul wanted to cut off aid to Egypt over its 2013 military coup. This position has the advantage of being in accordance with US law and being principled. It has the disadvantage that it disregards the ways in which the US needs Egypt as an ally in the Middle East.

On Israel’s attack on Gaza, Rand Paul’s head was so far up Prime Minister Binyamin Netanyahu’s ass that he knew which kind of hummus the PM had for lunch. He actually said he would support whatever the Israeli government wanted to do to the people in Gaza.

On Iran, I wrote of Paul on Monday:

[L]ast January at a Presidential forum he openly let the warmongers among his rivals have it with both barrels. Carol Giacomo wrote in the NYT that Rand asked chickenhawks Marco Rubio and Ted Cruz,

In other words, Paul largely agrees with Obama’s diplomatic approach to Iran, though no doubt he will find minor ways of distancing himself from the president.

What, then, would the Middle East look like under a Rand Paul presidency? I can’t see that it would be much different. Paul has already announced that he wouldn’t stand up to the far right wing Likud Party over its treatment of the Palestinians. He basically has Obama’s policy in Iraq and Syria, though he wouldn’t go so far as to try to train rebels against al-Assad. He has Obama’s policy on Iran. The only departures are that he is less forgiving of Egypt’s military coup than is the Obama administration (which also cut of funding for a while) and that he has been a critic of Obama’s extensive use of drones for counter-terrorism.