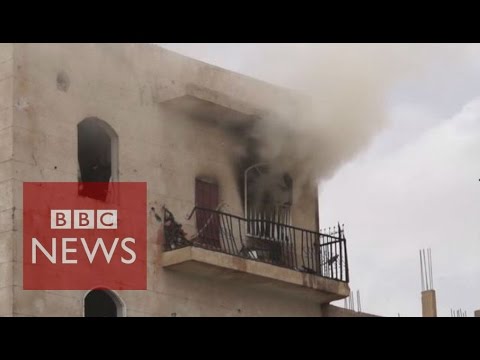 LONDON (IRIN) – As the Saudi-led aerial bombardment of Yemen intensifies and a full-scale civil war appears increasingly inevitable, there are few immediate escape routes for well over a million African migrants and refugees in the country.

Ports are closed and air traffic is largely restricted to evacuation flights for nationals of western or Asian countries. A few hundred foreign nationals have been allowed to cross a land border into Oman.

“So far refugees have not been evacuated. Clearly it is not easy to leave Yemen for anyone other than foreign nationals [and then only] after a real coordination with the Arab coalition” that has been bombing Yemen since 26 March, said UN Refugee Agency (UNCHR) spokesperson, Mogib Abdullah.

“UNHCR is seriously looking into the possibility of evacuating the refugees from Aden city when needed,” he added, noting that any evacuation plan would require “massive cooperation and collective efforts from different parties locally, regionally, and internationally.”

The agency has expressed particular concern about a large number of Somali refugees living among the local population in Basateen on the outskirts of Aden, where fighting has been intense in the last few days.

The conflict has so far displaced an estimated 100,000 people, according to the International Organization for Migration (IOM). But the majority have only been able to move short distances, for example from the heavily bombarded capital, Sana’a, to Amran Governorate about an hour’s drive to the north, and from the southern port city of Aden, another target for air strikes, to Abyan in the south east.

Over 600 people have been killed since the bombing campaign and ground combat started, according to the World Health Organization. The Ministry of Health puts the death toll at over 1,000.

As well as the closure of ports, fuel shortages have made sea crossings to the Horn of Africa increasingly difficult.

Djibouti has received 227 people from Yemen in recent days, the majority of them fishermen with their own vessels who managed to cross the Gulf of Aden. According to UNHCR in Djibouti, 167 people arrived on Saturday telling UNHCR staff they had fled bombing on Mayun Island in the Bab-el-Mandeb strait between Yemen and Djibouti. Another 252 Yemenis and returning refugees have reached Somalia.

Djibouti’s coast guard is directing Yemeni nationals to Obock in the north of the country, which the government has designated as the location for a refugee camp. Returning migrants from Djibouti and Ethiopia are being sent to the Port of Djibouti in the capital.

“Obock is where we’re registering refugees,” said Frédéric Van Hamme, external relations officer with UNHCR in Djibouti. He added that an initial contingency plan that envisaged up to 15,000 refugees arriving over the next six months was being revised and that “an influx” was expected.

Djibouti has a long history of hosting refugees and the government has declared itself ready to receive people fleeing the war in Yemen, but the country has a high unemployment rate and is struggling to recover from a protracted drought.

“For a country like Djibouti, it would be very difficult to bear more refugee pressure,” said Van Hamme.

Yemen itself is host to over 250,000 refugees, mostly Somalis, and a million migrants, the majority of them from Ethiopia. Until recently, the country continued to receive a steady stream of mainly Ethiopian migrants, most of them intent on continuing north towards Saudi Arabia in search of work opportunities. In 2014, over 90,000 migrants and refugees made sea crossings to Yemen. Most boarded smugglers’ boats from Obock while others departed from Bosaso in Puntland, a semi-autonomous region in the northeast of Somalia.

Describing migrants and refugees as “amongst the most severely affected” by the conflict, IOM has announced plans to evacuate 11,000 foreign nationals from Yemen, starting with three flights out of Sana’a airport scheduled for Wednesday.

“These are people who contacted our hotline and asked for assistance,” said Bekim Ajdini, a spokesperson with IOM in Yemen. “The first wave will be persons who have appropriate documentation.”

Russia and India are among the countries that have already evacuated many of their nationals from the country while IOM has received requests from 22 governments to transport their citizens to their home countries.

However, Lisa Piper, country director for the Danish Refugee Council (DRC) in Yemen said that many migrants remain stranded. “There are concerns that they could be susceptible to recruitment by armed forces, increased trafficking by smugglers because armed forces that normally patrol the migration pathways are currently engaged in the conflict, and increased tension with local communities because of the increased needs stemming from the current crisis,” she said, speaking to IRIN from Nairobi.

In the past week, as the security situation has deteriorated, several aid agencies providing assistance to migrants and refugees in Yemen have had to scale back their activities and evacuate their international staff from the country.

Until recently, the DRC was registering newly arrived migrants and providing them with humanitarian assistance at seven registration and information centres in Yemen, but has had to temporarily close five of them.

“We have had to scale back our assistance for economic migrants, asylum seekers, and refugees,” said Piper.

Via IRIN: Humanitarian News and Analysis