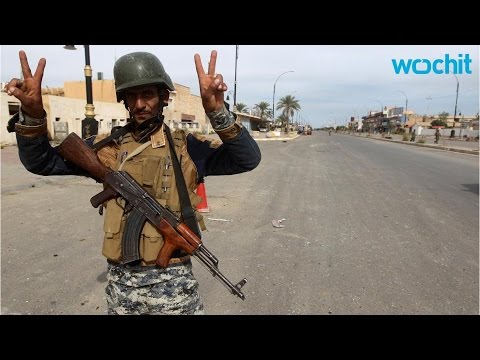 Only a few hours after the start of the next big military campaign against the Islamic State group in Iraq, things [went] wrong. Anbar will not be like Salahaddin – there are social, political, military and geographical obstacles to overcome first.

Last week the Iraqi government, buoyed by its recent victory in Tikrit, announced the beginning of an offensive in the province of Anbar. But plans seemed to go awry quite quickly. As soon as the campaign began, the extremist group known as the Islamic State surprised the Iraqi military by launching a counter offensive, managing to take control of the Albu Faraj, Malahima and Jazeera areas in Anbar.

Increasingly it looks as though the fight to liberate Anbar from the Islamic State, or IS, group is going to take a long time. And there are several main reasons for this – these are geographical, political, military and social and all of them point to the IS group having the upper hand here.

Firstly Anbar differs immensely in terms of its geography from the other parts of Iraq where the IS group has been expelled. It’s a huge area, measuring around 138,500 square kilometres and making up about a third of the whole country. A lot of the land is desert and the province also borders on Syria, Jordan and Saudi Arabia.

“The fact that Anbar is so big presents a major problem for the military,” Faleh al-Issawi, deputy head of Anbar’s provincial council, told NIQASH.

It is thought that currently the IS group controls about 90 percent of the province and the Iraqi government only controls two large cities, Ramadi and Haditha and three smaller ones, Amiriyat al-Fallujah, Khan al-Baghdadi and Habbaniyah. There are in fact eight larger cities in Anbar but the other six are controlled by the IS group – and it would be impossible for the Iraqi military to deploy to the other six cities for a number of reasons.

Pro-government forces in Anbar include Divisions 1 and 7 of the Iraqi army, special antiterrorism forces and fighters from local tribes who are opposed to the IS group. The group of local fighters, who were recently given weapons by the Iraqi government, doesn’t number more than an estimated 5,000.

“The government isn’t ready for this fight,” says Khaled al-Mafraji, an MP from Anbar. “It should have helped form a bigger fighting force made up of locals – maybe of around 30,000 fighters. Now there are only 5,000 and they’re not even well armed.”

The troops in Ramadi are a good 300 kilometres away from Al Rutba and 60 kilometres away from Heet; both of these towns are controlled by the IS group. The distances the Iraqi military must travel, often through desert, presents plenty of opportunity for the IS group to attack their convoys. It’s a far different situation from that which the troops faced in the provinces of Diyala and Salahaddin, says one Iraqi army colonel, Abbas al-Jabiri.

“Most of the towns in Diyala are agricultural,” al-Jabiri told NIQASH. “And the Iraqi military, together with Shiite militias, had been controlling large parts of them before. The IS group only had control of smaller areas there.”

It was similar in Salahaddin but in Anbar, it is mostly the IS group who is in charge in the vast province.

And there are other military issues. A lot of the IS fighters here are Iraqis who know the terrain; many had worked with the extremist group, Al Qaeda, in 2006 and 2007 and they know the desert roads better than the outsiders from the Iraqi army.

“The IS group know the roads and the bunkers of Anbar’s valleys,” concedes Omar al-Mohammedi, a tribal leader in Anbar. “They also know about the secret roads that connect Syria and Iraq, as well as tunnels that cross the border.”

In past battles, the unofficial and increasingly controversial Shiite Muslim militias, made up mostly of volunteers, have played an integral role in fighting against the IS group, which bases its ideology on Sunni Islam. The Shiite Muslim militias are known to be better armed and more experienced in urban warfare and, in many ways, it’s become clear that the Iraqi army cannot win without their support on the ground. And this is where political problems arise in the Anbar campaign.

Many of the Shiite Muslim militias are known to be supported by – and themselves support – neighbouring Iran. However the international alliance aiding the Iraqi army’s efforts with airstrikes is under US leadership and the US have said that the Shiite Muslim militias, who have been accused of committing retaliatory crimes against Sunni Muslims, should withdraw. There are fears that having the Shiite fighters in the mostly Sunni Muslim populated areas will only deepen existing sectarian tensions and may in fact push local Sunnis to support the IS group – which would obviously be counterproductive in the campaign to get rid of them.

As a result some Shiite militias have withdrawn in the Ramadi area. At the same time the international coalition has stepped up air strikes. But this has meant that the Iraqi army is being left to fight in Anbar without the ground support formerly supplied by the Shiite Muslim militias.

Further political and social problems have also arisen in Anbar at the local level. Politically speaking, there are two broad groups in the province. Both are Sunni but one group has allied itself with former Prime Minister Nouri al-Maliki, a Shiite Muslim politician who led the country until recently but who is also seen as bearing part of the blame for the current security crisis; this group supports the Iraqi government and the Shiite Muslim militias.

The second group is opposed to the Shiite Muslim militias and has urged the new Iraqi government, led by the far more conciliatory Prime Minister Haider al-Abadi, to start on political, social and security reforms.

The differences in opinion have split the tribes in Anbar to the extent that some believe they are now also at war with one another. It’s a far cry from the much lauded Awakening campaign, that enlisted Sunni locals from Anbar’s tribes to come together and fight against Al Qaeda between 2006 and 2008. Things are much more complicated now.

It is clear that the the Iraqi government needs to lead some kind of reconciliation process that will bring both politicians and tribal leaders back together, unified in one fight rather than scrapping with one another. And the Iraqi military needs to somehow enlist local fighters and arm them, or to get the Shiite Muslim militias back on board, while also utilising air strikes by the international coalition.

Obviously these are all far from easy tasks. And all of the above can add up to only one conclusion: It is going to take a far longer time to resolve Anbar’s issues and expel the extremists from here, than the much celebrated victory in Tikrit did.