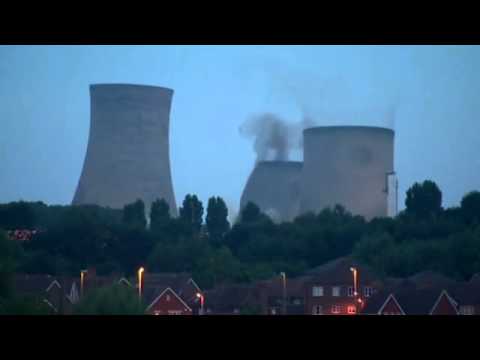 The UK could soon see coal use fall back to levels last seen during the industrial revolution as yet another uneconomical coal plant shuts its doors. On Wednesday, energy operator SSE announced the closure of its Ferrybridge coal-fired power station in West Yorkshire, blaming rising costs, citing the need for the UK to “phase out coal as it moves towards a more sustainable energy mix” and acknowledging the “political consensus that coal has a limited role in the future”. The company says it hopes to avoid job losses and aims to re-deploy the plant’s 172 employees within the company. The plant – which generated around 9 million tonnes of greenhouse gas emissions in 2012 – was forecast to lose £100 million over the next five years. Other coal power stations are also vulnerable as coal generation proves increasingly unprofitable across the country and around the world.

[The] announcement comes as new analysis shows that the UK could be on course for a record low in coal consumption in 2015, thanks to the UK government’s decarbonisation drive, EU air pollution rules and falling gas prices. Department for Energy and Climate Change projections show an end to coal use for electricity generation by 2023 if low gas prices persist, and in February the three main political parties signed a joint pledge promising the complete phase out the use of unabated coal-fired power. With a growing body of evidence showing how getting out of coal will protect the lives of UK citizens, shield the country from an increasingly volatile coal market, and help it meet its target of reducing emissions by 80% by 2050, on 1990 levels, there is little argument left for continued investment in this dirtiest of energy sources…

*Coal is on the decline in the UK. Today, energy operator SSE announced it would close its Ferrybridge coal-fired power station in West Yorkshire, one of the UK’s 10 remaining coal plants, citing rising costs and the need for the UK to “phase out coal as it moves towards a more sustainable energy mix”. The announcement comes as new analysis shows that the UK could be on course for a record low in coal consumption in 2015, with use expected to fall to levels last seen during the industrial revolution.

*Tumbling coal use has caused UK greenhouse gas emissions to plummet. The UK’s ageing coal-fired power stations are responsible for 79 per cent of power sector emissions. In 2014, UK coal use fell 23 per cent on the previous year, and hit the the joint lowest year for consumption in records dating back to the 1850s. This drop in coal contributed the majority of the 10 per cent fall in UK emissions experienced in 2014, the largest carbon dioxide reduction on record for a growing UK economy.

*Ending coal use is good for people, profits and the planet. The UK’s coal power stations are responsible for an estimated 1,600 premature deaths, over 360,000 lost working days and between £1.1 and £3.1 billion in medical costs every year. New research, released this week, also warns that attempts to water down EU pollution laws for coal plants could cost around £500 million in healthcare and sick days in the UK alone. By ending the use of coal and supporting the country’s booming renewables sector the UK could save lives and money, provide green jobs and ensure the country meets its emissions reduction targets.