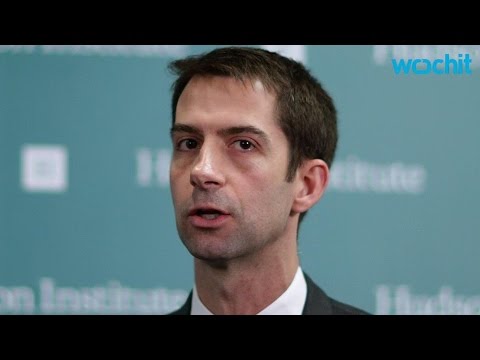 So freshman senator Tom Cotton (R-AK) got into a Twitter slamming match with Iranian Foreign Minister Mohammad Javad Zarif this week. Zarif spoke at New York University on Wednesday and asserted that if there were a UNSC deal on Iran’s nuclear energy program, international sanctions would be lifted whether Tom Cotton liked it or not.

Cotton fired back on Twitter, saying he had heard that Zarif called him out. He added (read from bottom): 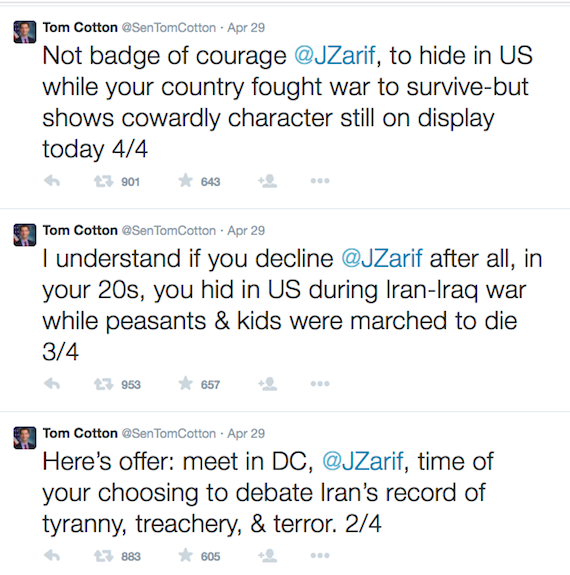 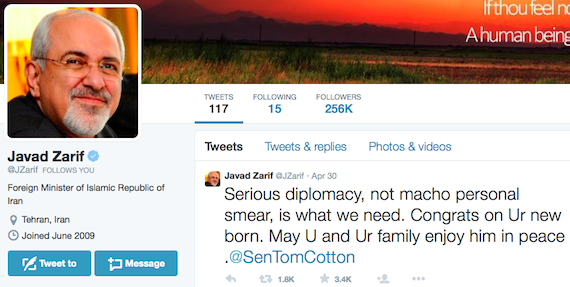 But by bringing up the issue of chickenhawks, Cotton is doing the Republican Party no favors. George W. Bush avoided serving in Vietnam by taking cover with the Texas Air National Guard, and he appears at some point to have gone AWOL. Bush could at any time have volunteered to go serve in Vietnam (it didn’t have to be as a pilot), but did not. His vice president, Dick Cheney, had five student deferments even as his peers were being drafted and sent off to die in the jungle. He said, when asked, that he had had other things to do. Bush and Cheney sent over 4000 US military personnel to die in an illegal war of aggression in Iraq, but had never seen a battlefield themselves.

Jeb Bush also did not volunteer to serve in Vietnam when he turned eligible in 1971. He registered for the draft but was not called up. Over 58,000 US military personnel died in Vietnam, but the Bush boys, despite never having met a war they didn’t adore, never set foot there. The Bushes of Connecticut in this generation no more fight their own wars than they do their own shopping. Is Cotton calling Jeb Bush a coward?

Scott Walker dropped out of Marquette in spring of 1990 and could have joined up then. He sat out the Gulf War. While at Marquette he had run for student office and was found guilty of cheating by starting his campaign a week earlier than the rules allowed.

Lindsey Graham and Kerry Bowers seem to me on quick inspection to be the only GOP candidates for president with military experience. Graham was in the Air Force in the 1980s and later was a reserve colonel with USAF JAG. He was recalled during the Gulf War though not sent to the front. He joined the Air Force reserves in the late 1990s and in the mid-2000s served briefly in Iraq and Afghanistan as an Air Force attorney.

Kerry Bowers was a 30-year man in the US military and was deployed to Bahrain during the Gulf War.

The tone of Cotton’s taunt of Zarif, however, would not even spare politicians who had been active duty military. Apparently they would have had to volunteer for the front during a shooting war to avoid being cowards.

So I’m pretty sure Cotton just called most of the Republican candidates for president cowards, and he certainly called the president and vice president in the last GOP presidential administration cowards.

Having been a conscientious objector during the Vietnam War, I obviously don’t agree that not volunteering for the front makes a person a coward.

I don’t doubt Cotton’s personal bravery or that of any Vet. But it would also have been brave to refuse to serve in an illegal war in which the US killed a lot of peasants. The unprovoked Iraq war in which Cotton fought set off events that left hundreds of thousands dead and left Iraq a long-term basket case. The world would have been better off with regard to character had Cotton declined to participate in that carnage.

As for Zarif, Saddam Hussein invaded Iran in 1980. By 1982 the war was a draw and Saddam was suing for peace. Ayatollah Khomeini refused, having the Iranian army fight on until 1988. Those six years were lost years for Iran and Iraq, war years that did not have to be, during which hundreds of thousands died. On the other hand, the onus for causing the war must remain on Saddam. I don’t think Zarif missed anything, morally.