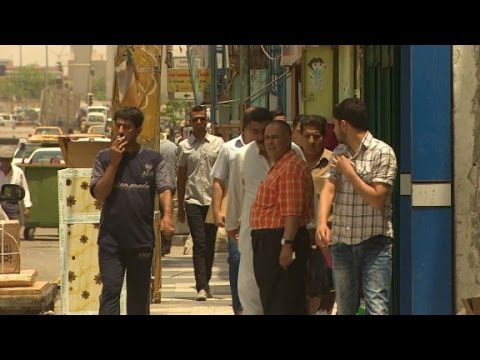 The fall of Ramadi means that Baghdad, Karbala and Babel have unpleasant new neighbours in the Islamic State group. How long before the extremists are in the capital’s backyard?

At one stage it seemed as though the chances of the extremist group known as the Islamic State entering Baghdad were remote. But now that the extremists have managed to take control of the city of Ramadi, about 100 kilometres away from the Iraqi capital, some are asking the question more seriously: Will the Islamic State, or IS, group start fighting their way toward Baghdad soon?

“Even though the extremists are closer, Baghdad is completely protected and there are no fears that it could fall to the IS group,” Hakim al-Zameli, the head of the Iraqi Parliament’s National Security and Defence Committee told NIQASH. “Thousands of fighters are deployed in northern and western Baghdad to stop the IS group from getting into Baghdad.”

However al-Zameli also admitted that there had been some breaches in further away areas around Baghdad. Last Saturday, the IS group also managed to take control of the city of Husaybah, only about 85 kilometres away from Baghdad. And al-Zameli also confirmed that, as everybody suspects, the IS group have sleeper cells inside the city.

Which is probably why not everyone is reassured by those comments, especially not locals who live in areas that analysts believe the IS group will try to get into next. These areas might include the Taji and Tarimiya areas north of Baghdad, Amiriyat Al Fallujah and Abu Ghraib west of Baghdad and Jurf al-Sakhar,Yusufiyah and Latifiya south of Baghdad. All of these are Sunni-majority areas and include a lot of agricultural land, which would allow the IS fighters, who subscribe to their own version of Sunni Islam, to hide and fight more easily.

“If the IS group manage to get in here they will kill many of us,” says Qais al-Janabi, a tribal leader from the Yusufiyah area; his tribe have not fought against the Iraqi army and he says that the IS group will consider them traitors. “If the armed forces withdraw we will be killed, just as the IS killed those they considered traitors in Ramadi. And the security forces don’t often trust the residents of Sunni areas. They withdraw when they feel threatened, leaving the local people to an unknown fate at the hands of the extremists.”

It is widely acknowledged that many soldiers in the Iraqi armed forces are Shiite Muslims; hence the antagonism between the soldiers and locals. The rank and file believe the Sunni populace will just turn on them at the first opportunity.

“The problem isn’t the number of soldiers protecting Baghdad,” points out Sinan Taha, a teacher from the Ghazaliya neighbourhood on the western outskirts of Baghdad. “It is about their abilities and their resilience.”

“We all know that most of the IS’ victories happened because security forces withdrew,” Taha points out.

Baghdad airport will be the IS group’s first target, an Iraqi intelligence officer told NIQASH; he works in a joint operations command in Baghdad that coordinates the work of police, the Iraqi army and US forces and he could not be named because he was not authorised to speak to the media. “The army has confirmed that the IS group has intentions to come closer to Baghdad and to control villages in the Anbar province that are connected to Baghdad. This includes Ibrahim bin Ali, Amiriyat Al Fallujah and Tarimiya,” the officer told NIQASH.

These areas are all only about 20 to 30 kilometres away from Baghdad airport and the military analyst says that the IS group has the weapons to be able to shell the transport hub from there; that weaponry was apparently left behind by the Iraqi army after they withdrew from Ramadi.

It is not only Baghdadis who are starting to worry that they are not as safe as they thought they were. Provincial authorities in the province of Babel are also taking urgent steps to protect themselves from the IS group.

The provincial authorities agreed to take several defensive steps a few days ago at a closed meeting. They plan to deploy thousands of fighters to the northern borders of the province, where it meets Ramadi, and to bring back all of their fighters stationed in other provinces. There are also plans to build dirt barriers and moats to separate Babel from the Amiriyat Al Fallujah and Jurf al-Sakhar areas.

“These are just defensive measures,” Falah al-Rahdi, the head of the Babel provincial council’s security committee, told NIQASH. “But the city needs to be prepared for any possible infiltration by the IS group, especially after their control of Ramadi and Fallujah, both of which are close to us.”

Even Karbala, home to one of the holiest cities for Iraq’s Shiite Muslims and therefore, one imagines, one of the best guarded areas, seems to be on high alert, with calls for defence from the unofficial Shiite Muslim militias. The IS group threatened to move into Karbala, a Shiite-majority city with an estimated population of 1 million, after Ramadi and influential Shiite cleric, Muqtada al-Sadr has said that those threats should be taken seriously. “Fighters should be deployed around and inside the city to protect it,” al-Sadr said.

Fighters from al-Sadr’s militia, known as the Peace Brigades, announced that they would deploy to cities and towns in the Anbar province, like Rahala and Naqeeb, that are close to Karbala.

In the meantime Iraq’s collection of pro-government forces, including the Iraqi army and unofficial Shiite Muslim militias, have also started their campaign to re-take Anbar province from the IS group. It is uncertain how long such a campaign will take – especially given the mostly Sunni make-up of the population in Anbar as well as tribal conflicts inside the province, not to mention whether the forces involved will fight well together. And it is obviously impossible to know whether the IS group will be successful in their ambition to get closer to Baghdad. There are no complete or correct answers to any of those concerns. All that Iraqis can be sure of now is that, with their control of Ramadi – however long it lasts – the extremists have come closer to the capital and they are seeking to control other areas that are even closer.