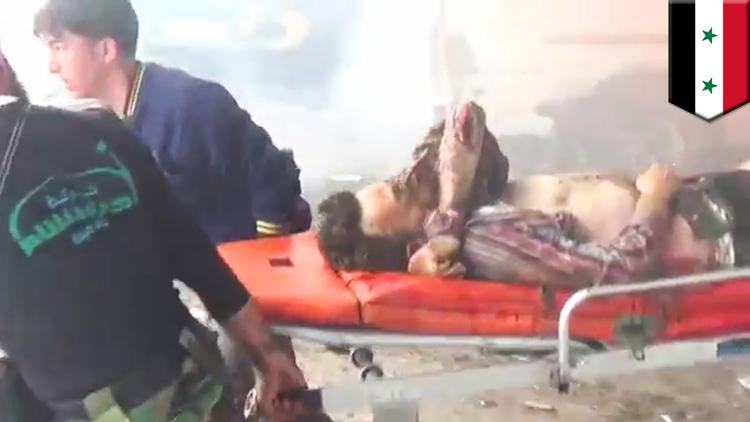 Syrian civilians are trapped in the middle of a holocaust: prizes in a ruthless contest for popular support and cannon fodder mercilessly slaughtered by forces with little regard for human life.

Despite many groups being implicated in actions targeting civilian populations, the greatest purveyor of carnage remains the Assad regime. As Amnesty International’s report on human rights violations in a single Syrian city, Aleppo, states:

These violations amount to war crimes and in the case of those committed by the Syrian government are so systematic and widespread that they constitute crimes against humanity.

And yet many insist that the West should appease the Assad regime using the old proverb of “my enemy’s enemy is my friend” – as if it is simply a choice between Assad or Islamists. This is grotesquely simplistic and ignores perhaps the most important interest bloc in the conflict and the key to defeating Islamic State in Syria: Syrian civilians.

A longer history of terror

Having spoken to a broad array of Syrians, from Sunnis, Shias and Kurds to former regime members and opposition activists, three words capture their insights: despair, survival and abandonment.

The sense of anguish that many expressed regarding the failure of Syria’s Arab Spring is exacerbated by a belief that this was one of many missed opportunities to topple the regime. As Muhammed, from Idlib, explained:

We lived for over 40 years with this regime. The regime didn’t start its crimes today or yesterday, it started from the day it took power.

Syrians are acutely aware of the Assad dynasty’s history of terror. Fatima, a former resident of Daraa, stated that during the regime’s siege of her city in April 2011, residents feared that they would share the fate of Hama residents who, in 1982, were massacred in the tens of thousands by Hafez al-Assad’s forces.

As Bashar’s atrocities surpass those of his father, some Syrians, such as Anwar from Damascus, have come to believe that the key to peace – including the defeat of Islamic State – requires the end of the Assad regime.

Return to the cause of all this evil, which is having a dictator that is terrorising his citizens and preventing them from having a free life. We must clean this wound before closing it.

A common sentiment, especially from those working for Syria’s opposition radio stations, was that the global media’s obsession with Islamic State and foreign fighters had reinforced false perceptions of the war.

Where is the revolution [in the media’s reporting]? It’s not our fault. The Syrian people keep fighting the regime but nobody cares about that now because they (the media) don’t want [to show] that.

Fear is pervasive amongst the civilian population. While it is easy from a distance to suggest the success of Islamist groups is indicative of a growing Islamisation of the conflict, this is too simplistic. Just as operational priorities (e.g. attacking the regime) rather than ideological congruency often drive inter-group cooperation, it is pragmatism not Islamism that often drives civilian ‘support’.

For example, many interviewees warned that Jabhat al-Nusra’s (JN) strategy of fighting the regime, providing charity and limited governance whilst placing Syrian members at the forefront of their “ground-level” efforts, was resonating strongly with people living in apocalyptic conditions. As one respondent stated:

Most of them (JN) are Syrians [so] when you (the West) fight them … when you bomb them, they get more supporters.

Western military operations that weaken one group (such as anti-regime rebels) create opportunities for their opponents (such as the Assad regime). And that may inadvertently perpetuate conditions for the civilian population that are counterproductive to broader Western strategic aims (such as diminishing the appeal of extremists). One Syrian interviewee summed up that situation:

When America blacklists, the Syrian people [are starting to] whitelist.

There are many Syrians who continue to struggle and fight for the founding principles of the Syrian revolution. However, global media coverage has tended to ignore those voices while coalition military (and political) responses risk creating an environment that is more conducive to the rise of extremists.

The belief that the world has abandoned Syria was pervasive in these interviews. Many Syrians’ morale was shattered when Obama backed away from his pledge that the Assad regime’s use of chemical weapons constituted a “red line” that might trigger a US-backed military response.

Indeed, it is almost impossible to convey the almost visceral sense of abandonment this issue stirs. Little wonder, then, that strong Western rhetoric is often scornfully dismissed:

Obama can cover the whole world in red lines. Who cares? We are dying here. And Ban Ki Moon? He is ‘worried’ all the time. Ban Ki Moon is worried, Obama is drawing red lines, everybody is talking and nobody is doing anything.

The West’s obsession with Islamic State has further fuelled these resentments:

The regime are killing people [with barrel bombs] … and they (the West and its allies) didn’t stop them. But they moved the whole world to destroy [Islamic State] in Kobane.

The plight of ordinary Syrians matters because they are not only a vital barometer for the region’s trajectory but they will drive and bear the burden for that trajectory.

Western nations would do more to thwart the rise of extremist movements, including Islamic State, if they demonstrated more consideration for the needs of civilian populations.

* Note: The identities of all interviewees featured in this article have been kept anonymous. All names of interviewees are pseudonyms. This article was co-authored by L.T. Anthony.