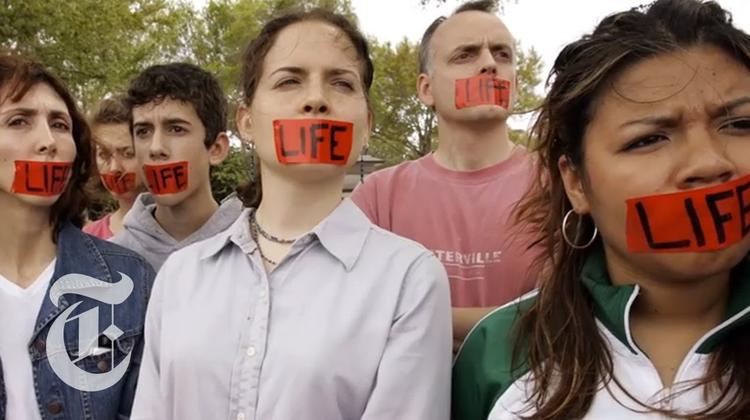 Michael Schiavo is speaking out about Jeb Bush’s determined, sustained and energetic intervention, as Florida governor, in the private medical decision of the Schiavo family to take Terri off life support after her brain showed no sign of activity. Politico says,

“Michael Schiavo called Jeb Bush a vindictive, untrustworthy coward. For years, the self-described “average Joe” felt harassed, targeted and tormented by the most important person in the state. “It was a living hell,” he said, “and I blame him.”

‘
The article raises questions about what sort of president Jeb Bush would be.

This is what Informed Comment said at the time:

The cynical use by the US Republican Party of the Terri Schiavo case repeats, whether deliberately or accidentally, the tactics of Muslim fundamentalists and theocrats in places like Egypt and Pakistan. These tactics involve a disturbing tendency to make private, intimate decisions matters of public interest and then to bring the courts and the legislature to bear on them. President George W. Bush and Republican congressional leaders like Tom Delay have taken us one step closer to theocracy on the Muslim Brotherhood model.

The Muslim fundamentalists use a provision of Islamic law called “bringing to account” (hisba). As Al-Ahram weekly notes, “Hisba signifies a case filed by an individual on behalf of society when the plaintiff feels that great harm has been done to religion.” Hisba is a medieval idea that had all but lapsed when the fundamentalists brought it back in the 1970s and 1980s.

In this practice, any individual can use the courts to intervene in the private lives of others. Among the more famous cases of such interference is that of Nasr Hamid Abu Zaid in Egypt. A respected modern scholar of Koranic studies, Abu Zaid argued that, contrary to medieval interpretations of Islamic law, women and men should receive equal inheritance shares. (Medieval Islamic law granted women only half the inheritance shares of their brothers). Abu Zaid was accused of sacrilege. Then the allegation of sacrilege was used as a basis on which the fundamentalists sought to have the courts forcibly divorce him from his wife.

Abu Zaid’s wife loved her husband. She did not want to be divorced. But the fundamentalists went before the court and said, she is a Muslim, and he is an infidel, and no Muslim woman may be married to an infidel. They represented their efforts as being on behalf of the Islamic religion, which had an interest in seeing to it that heretics like Abu Zaid could not remain married to a Muslim woman. In 1995 the hisba court actually found against them. They fled to Europe, and ultimately settled in Holland.

Likewise, a similar tactic was deployed against the Egyptian feminist author, Nawal Saadawi, but it failed and she was able to remain in the country.

One of the most objectionable features of this fundamentalist tactic is that persons without standing can interfere in private affairs. Perfect strangers can file a case about your marriage, because they represent themselves as defending a public interest (the upholding of religion and morality).

Terri Schiavo’s husband is her legal guardian. Her parents have not succeeded in challenging this status of his. As long as he is the guardian, the decision on removing the feeding tubes is between him and their physicians. Her parents have not succeeded in having this responsibility moved from him to them. Even under legislation George W. Bush signed in 1999 while governor of Texas, the spouse and the physician can make this decision.

In passing a special law to allow the case to be kicked to a Federal judge after the state courts had all ruled in favor of the husband, Congress probably shot itself in the foot once again. The law is not a respecter of persons, so the Federal judge will likely rule as the state ones did.

But the most frightening thing about the entire affair is that public figures like congressmen inserted themselves into the case in order to uphold religious strictures. The lawyer arguing against the husband let the cat out of the bag, as reported by the NYT: ‘ The lawyer, David Gibbs, also said Ms. Schiavo’s religious beliefs as a Roman Catholic were being infringed because Pope John Paul II has deemed it unacceptable for Catholics to refuse food and water. “We are now in a position where a court has ordered her to disobey her church and even jeopardize her eternal soul,” Mr. Gibbs said. ‘

In other words, the United States Congress acted in part on behalf of the Roman Catholic church. Both of these public bodies interfered in the private affairs of the Schiavos, just as the fundamentalist Egyptian, Nabih El-Wahsh, tried to interfere in the marriage of Nawal El Saadawi.

Like many of his fundamentalist counterparts in the Middle East, Tom Delay is rather cynically using this issue to divert attention from his own corruption. Like the Muslim fundamentalist manipulators of Hisba, Delay represents himself as acting on behalf of a higher cause. He said of the case over the weekend, ‘ “This is not a political issue. This is life and death,” ‘

Republican Hisba will have the same effect in the United States that it does in the Middle East. It will reduce the rights of the individual in favor of the rights of religious and political elites to control individuals. Ayatollah Delay isn’t different from his counterparts in Iran.