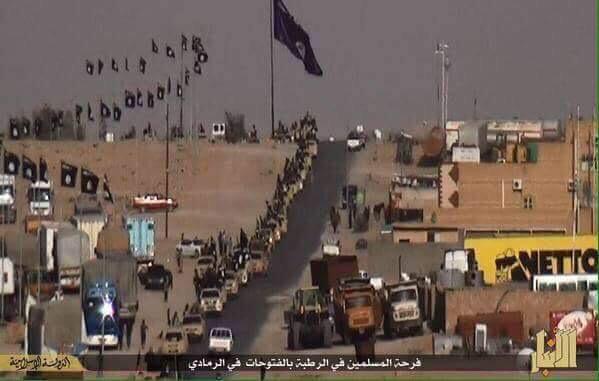 Secretary of Defense Ashton Carter’s blunt remarks on Sunday about the Iraqi army not having the will to fight have ruffled feathers in Baghdad and Tehran, and Vice President Joe Biden was constrained to call Iraqi Prime Minister Haydar al-Abadi and reassure him that the US was standing with him.

Carter was referring to the Iraqi army’s ignominious retreat from Ramadi over a week ago.

Iranian Brig. Gen. Qasem Soleimani, head of the Jerusalem (Qods) Brigades of the Iranian Revolutionary Guards Corps, fired back at Washington, maintaining that the US is the problem.

Soleimani said that only Iran had stepped up to help Iraq fight Daesh (ISIL, ISIS). He added, “Obama has not done a damn thing so far to confront Daesh: doesn’t that show that there is no will in America to confront it? . . . How is it that America claims to be protecting the Iraqi government, when a few kilometres away in Ramadi killings and war crimes are taking place and they are doing nothing?”

Iraqi forces in al-Anbar Province, unlike those in Salahuddin and Ninewa Provinces, have frequently complained of the lack of close air support from the US and its coalition. Even in Salahuddin, the US had declined to fly air force missions to help the campaign to take Tikrit, until the campaign stalled out and looked like it would fail. At that point PM al-Abadi pleaded with President Obama to intervene. Obama initially appears to have wanted to avoid giving close air support to pro-Iranian Shiite militiamen, the bulk of the effective fighting force around Tikrit, insisting it would only help the regular Iraqi army.

It is a bit mysterious why the US allows Daesh armored convoys to move around al-Anbar freely, a point made on Twitter by a Dr. Mohammed Hammudi:

Dear @POTUS: if ISIL has convoys of this size in Iraq without fear of attack, how serious is our air campaign? pic.twitter.com/FNdtgrM3iX

The US seems to be using its air strikes not just to contain Daesh but as a bargaining chip with the al-Abadi government. Al-Abadi has an army that doesn’t amount to much, but has a set of Shiite militias that fight just fine. He had asked the militias to stay away from solidly Sunni al-Anbar, because he feared that the image of Shiite militias attacking Daesh would anger Sunni Arabs. The militias in turn are getting training and advice from Iran.

The US doesn’t want to appear to be flying close air support missions for these Shiite militias, and, essentially, for Iran, against a Sunni population. Obama probably is withholding some air support to encourage al-Abadi to break with the Shiite militias or at least to induct them into the regular army.

But letting Ramadi fall in order to punish al-Abadi for not being inclusive enough in his policies (if that is what happened) was a major policy error on Obama’s part.

Soleimani is exaggerating when he says that the US has done nothing. But it is true that the US air force seems to be leaving a lot of pieces on the board for Daesh, and it is hard to imagine why that should be.