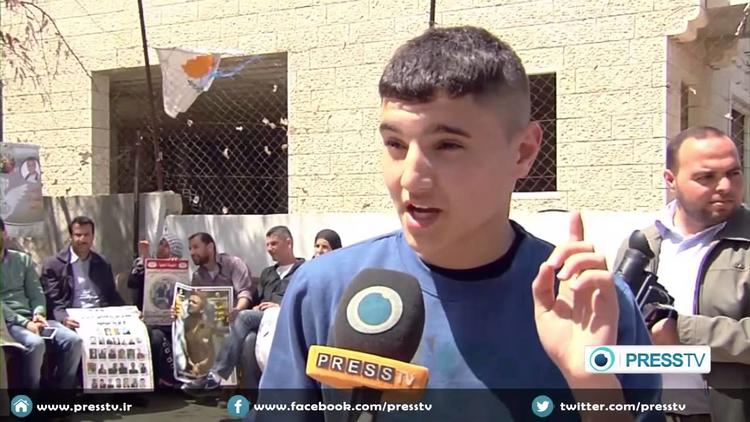 RAMALLAH, West Bank (IPS) – Palestine’s ambassador to the United Nations, Riyad Mansour, has sent a letter to the U.N. Security Council demanding that action be taken against Israel over the abuse of Palestinian children after they have been arrested by Israeli security forces.

“Every single day and in countless ways, Palestinian children are victims of Israeli human rights violations, with no child considered too young to be spared the oppression being meted out by the Israeli occupying forces and extremist settlers,” wrote Mansour. “These crimes committed against our children are intolerable and unacceptable.”

“Every single day and in countless ways, Palestinian children are victims of Israeli human rights violations, with no child considered too young to be spared the oppression being meted out by the Israeli occupying forces and extremist settlers” – Riyad Mansour, Palestine’s ambassador to the United Nations
The letter, sent on May 1, followed the detention of a nine-year-old boy, Ahmad Zaatari from Wadi Joz in East Jerusalem, who had been detained on the night of Apr. 28 for approximately eight hours by Israel police after they alleged that he and his brother, 12-year-old Muhammad Zaatari, had thrown stones at an Israeli bus.

Allegations of the mistreatment of Palestinian children while in Israeli police and military detention facilities in East Jerusalem and the occupied West Bank are not new.

“The ill-treatment of children who come in contact with the military detention system appears to be widespread, systematic and institutionalised throughout the process,” said the U.N. Children’s Fund (UNICEF) in a 2013 report titled Children in Israeli Military Detention, which recommended that 38 changes be made after consulting with Israeli authorities.

However, in February 2015, UNICEF released an update reviewing progress made in implementing the report’s 38 recommendations during the intervening period, which found that “reports of alleged ill-treatment of children during arrest, transfer, interrogation and detention have not significantly decreased in 2013 and 2014.”

In an April 2015 report on ‘Children in Israeli Military Detention’, rights group Military Court Watch (MCW), which monitors the treatment of Palestinian children in Israeli military detention, said that “at least 87 percent of UNICEF’s recommendations lack effective implementation and the ill treatment of children who come in contact with this system still remains ‘widespread, systematic and institutionalised’.”

Defence for Children International Palestine (DCIP), a Palestinian human rights organisation specifically focused on child rights has been reported as saying that “Palestinian children are treated as mercilessly as adults. Most troubling are brutal beatings, other forms of torture and prolonged isolation in solitary confinement.”

According to DCIP, unlike Jews, Palestinian parents cannot accompany their children when interrogated, and there are cases of children even younger than 12 arriving at interrogation centres shackled, blindfolded and sleep-deprived.

Most experience physical abuse amounting to torture before, during and after interrogation, and “almost all children confess regardless of guilt to stop further abuse,” said DCIP, adding that the children are often forced to sign confessions in Hebrew which they cannot read or understand.

“Similarities in the situation in East Jerusalem and the West Bank exist because of the inevitable tensions that arise due to the prolonged military occupation,” Gerard Horton from MCW told IPS.

“You can tinker with the system as much as you like but unless the underlying causes are addressed the situation will remain the same.

“Most Palestinian children are arrested near Israeli settlements in East Jerusalem and the West Bank. If you insert 500,000 settlers into occupied territory and the security forces’ job is to protect them, this inevitably results in the local population being terrorised,” added Horton.

Meanwhile, Israel was harshly criticised in a report of the board of inquiry regarding incidents during last year’s Gaza war released by U.N. Secretary General Bank Ki-moon on Apr. 27.

The board of inquiry concluded that Israel was responsible for the death of 44 Palestinians, and the injuring of 227 others, when they carried out seven attacks on six U.N. sites in Gaza where Palestinian civilians were sheltering.

Ban condemned the shelling attacks with “the utmost gravity” and said that “those who looked to them [U.N. shelters] for protection and who sought and were granted shelter there had their hopes and trust denied.”

According to Chris Gunness, spokesman for the U.N. Relief and Works Agency (UNRWA), the United Nations provided the Israelis with the exact locations of the U.N. facilities where the civilians were sheltering.

“The U.N. inquiry found that despite numerous notifications to the Israeli army of the precise GPS coordinates of the schools and numerous notifications about the presence of displaced people, in all seven cases investigated by the Board of Inquiry when our schools were hit directly or in the immediate vicinity, the hit was attributable to the IDF [Israel Defence Forces],” said Gunness.

However, the U.N. Secretary General also criticised Palestinian groups for putting some of the U.N. schools at risk by hiding weapons in some of them.

“I am dismayed that Palestinian militant groups would put United Nations schools at risk by using them to hide their arms. However, the three schools at which weaponry was found were empty at the time and were not being used as shelters,” said Ban.

Israeli diplomats put pressure on the United Nations not to release its findings into the war until the Israeli authorities had conducted their own investigation into alleged human rights violations. In September last year, Israel opened investigations into five criminal cases, including looting.

More than 2,100 Palestinians, most of them civilians, were killed during the Gaza conflict. Sixty-seven Israeli soldiers and six civilians in Israel were killed by rockets and attacks by Hamas and other militant groups.

PressTV: “Protest in Ramallah in solidarity with Palestinian children held in Israeli jails”