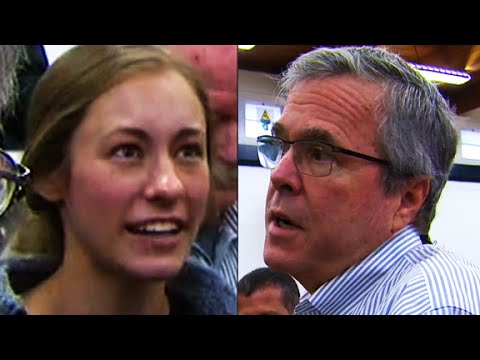 It was one of those moments that politicians dread. An unscripted incident last month when a voice in a crowd pinned down a candidate on an issue he could not squirm away from and made news in the process. With the media recording every word, a 19 year old college student at University of Nevada, Reno named Ivy Ziedrich took Jeb Bush to task for moments earlier saying that Obama had created ISIS. As the cameras rolled she told candidate Bush “Your brother created ISIS…It was when 30,000 individuals who were part of the Iraqi military were forced out — they had no employment, they had no income, and they were left with access to all of the same arms and weapons.”[1] Bush responded by accusing her of “rewriting” history.

The incident set off a new round of acrimony as to who had created the pre-conditions for the rise of ISIS in post-US Iraq and the student who asked the question became an instant celebrity on numerous talk shows. But is there any validity to Ms. Ziedrich’s bold claim that George W. Bush “created” ISIS by firing the Iraqi army in 2003?

A journey back into the tumultuous post-invasion months and years sheds a rare historic light on this highly contentious issue and answers the question as to whether Bush’s invasion inadvertently created the conditions for the rise of the hybridized jihadi army/terror group known as ISIS out of the ashes of Saddam Hussein’s Baathist Iraq.

How to Create a Jihadi Insurgency

In the aftermath of the 2003 invasion and toppling of the Socialist Baathist regime of Saddam Hussein, the Bush White House sent a civilian official to take charge of post-invasion Iraq named Paul Bremer. On May 11, 2003 Bremer became governor of  American-occupied Iraq in his role as head of the Coalition’s Provisional Authority. This made him perhaps the most powerful American abroad since General Douglas MacArthur took control of post-World War II Japan. But Bremer’s initial decisions lacked the sagacity of MacArthur’s policies during the occupation of Japan. In fact the architects of Bremer’s missteps were the Neo-Cons who called for total De-Baathification in Iraq based on the model of De-Nazification in Post World War II Germany.

Paul Bremer’s first step was Provisional Authority Order Number 1, issued on May 16th. Order Number 1 banned the Sunni-dominated Baathist Party which had run Iraq for decades. The previous temporary governor of Iraq, General Jay Garner, and his staff were appalled by the decision and warned Bremer “It was too deep.” One of Garner’s staff recalled saying “if you do this, you’re going to drive 30,000 to 50,000 Ba’athists underground by nightfall. And the number’s closer to 50,000 than it is 30,000.”[2] The CIA Station Chief in Baghdad agreed with the number of 50,000 Baathists being driven underground and said “In six months you will regret this.”[3] By banning the Baathist Party, which had as many as 700,000 members who were used to being in power, Bremer turned this mass of powerful leaders and their dependents against the US occupation overnight.[4]

The majority of those to be disenfranchised with Order Number 1 were of course Sunni Muslims who had held the grip on power in the country for five centuries. This act had a negative impact on everyone from civil servants to the technocrats who ran government ministries. In some Sunni areas, such as Fallujah, there were no schoolteachers left after Order Number 1 was promulgated because most of them were fired as members of the Baath party. Far from helping to stabilize Iraq, this act led to unemployment and economic hardship for tens of thousands of Iraqis who had joined the Baath party often just to get a job.

Bremer’s second step compounded matters and might have been a play from a manual on how to ignite an insurgency. His second step was Order Number 2 which disbanded the Iraqi army on May 23rd 2003. This step went against the suggestions of a group of security experts at the National Defense University who had also warned against “top down de-Baathification.” This group had warned that the Iraqi military was one of the rare unifying institutions in Iraq that stressed national identity. According to this group of experts “To tear apart the army in the war’s aftermath could lead to the destruction of one of the only forces for unity within the society.”[5]

The Iraqi military, which consisted of 385,000 men in the army and 285,000 in the Ministry of Defense, was a much respected institution in Iraq and its disbandment shocked Iraqi society. The tens of thousands of Iraqi soldiers who had taken their weapons home instead of fighting the American invasion felt betrayed when they were fired. This created a recruitment pool of armed, organized and disaffected soldiers. In one fell swoop these Iraqi soldiers lost their careers, their paychecks, their pensions and their source of pride. General Daniel Bolger would claim that de-Baathification “guaranteed Sunni outrage.”[6] One American colonel was to subsequently recount the almost simultaneous ramp up in violence following the firing of the Sunni-dominated army as follows: “Who knows how many [Iraqi army] folks got disgruntled and went to the other side? I will tell you this, 72 hours after the decision was made, the first major attack from the airport road took place. And I got two of my military police killed. And it’s sort of been downhill from there.”[7]

Another Army colonel said “When Bremer did that, the insurgency went crazy. May was the turning point.”[8] The US military, CIA and State Department were all against these Neo-Con-inspired policies and one US general furiously said, “You guys just blindsided Centcom. We snatched defeat from the jaws of victory and created an insurgency.”[9] Another expert on Iraq stated “We made hundreds of thousands of people very angry at us and they happened to be the people in the country best acquainted with the use of arms.”[10]

Prior to this act, the US military had hoped to work with the Iraqi military to rebuild Iraq. Their aim was to provide thousands of Iraqi soldiers with jobs, pride and a stake in building a new Iraq. That option was now gone.

Combined together, Orders Number 1 and 2 essentially fired and disenfranchised/disempowered two million people who had weapons, respect and built-in communication networks. The Iraqi military was especially furious and Iraqi soldiers who had lost their jobs, source of pride and incomes took to holding daily protests at the gates to the Green Zone (i.e. the fortified district in downtown Baghdad that the US-led government occupied). During these protests, one Iraqi officer stated “We are all very well trained soldiers and we are armed. We will start ambushes, bombings and even suicide bombings.”[11] Another humiliated Iraqi would state “We’re against the occupation, we refuse the occupation—not one hundred percent, but one thousand percent. They’re walking over my heart. I feel like they are crushing my heart.”[12] During one protest against the mass firings, two Iraqi officers were shot by US troops thus further infuriating this laid off pool of potential recruits for the insurgency.[13]

These angry Iraqis, a majority of whom were the previously ruling Sunnis, felt they had no stake in the new Iraq that the US was building and resented what they saw as de-Sunnification. One Sunni’s anguished complaint captures the sentiment of this group that felt it had been arbitrarily removed from power by the Americans after ruling Iraq since the 1500s. This source stated “We were at the top of the system. We had dreams. Now we are losers. We lost our positions, our status, the security of our families, stability. Curse the Americans, curse them.”[14]

Historian Ahmed Hashim has written, “Dissolving the army meant also driving a stake through a Sunni identity that had relied on the armed forces as a primary institutional and symbolic support of identity.”[15]Fulfilling the law of unintended consequences, this pool of marginalized Sunnis would become known in US military parlance as POIs (Pissed Off Iraqis). Many of them would go on to join the Sunni insurgency which began to take shape by the summer of 2003. The insurgents offered unemployed ex-soldiers or ex-Baathists salaries of up to $100 to shoot Americans or plant landmines. If they filmed the killing of an American they got a bonus.

Within a matter of weeks the Sunni insurgents would begin to wage a classic guerilla war via roadside bomb attacks on US patrols, mortar attacks, sniper ambushes and suicide bombings. They had no problem accessing weapons and explosives since many of them were previously in the military. One Iraqi general spoke of the decision by scores of fired Iraqi soldiers to join the insurgency and fight the American occupation: “The Americans bear the biggest responsibility. When they dismantled the army what did they expect those men to do? They [the fired Sunni Iraqi soldiers] were out in the cold with nothing to do and there was only one way out for them to put food on the table… They didn’t de-Baathify people’s minds, they just took away their jobs.”[16]

The rest is history. The Sunni insurgents went on to form Al Qaeda in Iraq in 2004 (the CIA has stated there was no Al Qaeda presence before this, despite the president’s claims), which then morphed into the Islamic State (IS) after its leader Abu Musab Zarqawi was killed in the summer of 2006. When the U.S. pulled out its troops in December 2011 in fulfillment of President Bush’s December 2008 SOFA (Status of Forces Agreement) with the Iraqi government, the down-but-far-from-out IS insurgents took advantage of the American-installed, Shiite-dominated Iraqi government’s continued repression of disenfranchised Sunnis to regain momentum and recruits.

All it took was the start of another war between ruling Shiites and repressed Sunnis in neighboring Syria starting in 2011/12 and IS began to send fighters across the border to fight there as well. Thus IS became a transnational insurgent group known as ISIS (the Islamic State in Iraq and Syria) and began to seize territory in both Iraq and neighboring Syria. The jihadi “infection” had spread from the US-occupied Sunni Triangle of 2003/4 into neighboring Baathist Syria where formerly secular Sunnis similarly began to grow their beards long and join the spreading Islamist insurgent movement.

Today ISIS fighter-terrorists rule over millions of Iraqis (many of whom were formerly secular Baathists under Hussein) and Syrians in a region larger than the U.K. and twice the size of Israel. It goes without saying (well except by the likes of Ms. Ziedrich) had Bush, or more correctly Paul Bremer, not fired both the Iraqi Army and Baathist Party after the 2003 invasion of Iraq there would be no ISIS today. It has been widely demonstrated that the Baathists fired by Bremer in 2003 play a major operational role in ISIS today. The Washington Post, for example, has reported that “almost all of the leaders of the Islamic State are former Iraqi officers, including the members of its shadowy military and security committees, and the majority of its emirs and princes.”[17]

Operation Iraqi Freedom thus fulfilled the Law of Unintended Consequences in this unpredictable part of the world that had been previously been tenuously held together by Hussein’s Baathist Socialist regime and opened the Pandora’s Box that would ultimately lead to creation of ISIS. For the Americans who had overthrown one Medieval regime in Afghanistan, only to inadvertently create the conditions for the rise of another in oil rich Iraq and Syria out of the ashes of what had once been the two most secular regimes in the Arab Middle East, it was one step forward and two steps back.

Brian Glyn Williams worked for the CIA’s Counter Terrorism Center and the US Army’s Information Operations team at ISAF HQ in Afghanistan and is Professor of Islamic History at the University of Massachusetts-Dartmouth and author of “Predators. The CIA’s Drone War on Al Qaeda”(Washington DC, Potomac 2013).

Reprinted from The History News Network with the author’s permission.