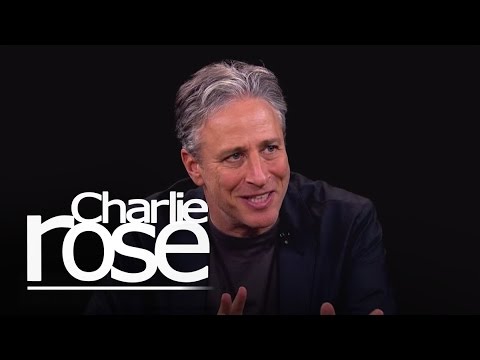 N.B. Rosewater is now streaming at Amazon Instant Video and will be available on Netflix beginning June 10

Though a touch weary, Stewart is smart, funny company. He wasn’t nervous directing. “I don’t mean to denigrate it—it’s still just a movie, you know? I’m doing a movie about torture, I’m not being tortured. So I think you have to retain that perspective, and I made sure we retained that on the set.”

At a Toronto hotel[1] during the city’s film festival, I tell him Rosewater’s Daily Show-esque absurd comedy succeeds. “Right,” he replies emphatically. “Trying to make that organic to the story and not creating it in a way—so much of what we try to do is to not create any discordant distraction, so that the humour did not feel unmotivated.”

Mike Lerner, director of Pussy Riot: A Punk Prayer, the stirring documentary about the Russian performance artists, tells me going on The Daily Show is great. “Jon’s somebody who has no ideological position. He’s somebody that finds inconsistency funny, and hypocrisy funny, and that’s it.”

“Humour is the most damaging weapon we have,” Lerner says, and Stewart agrees, in that distinctive voice, albeit less caffeinated and intense than on TV.

The casually dressed, t-shirt wearing 52-year-old says he doesn’t believe Bahari’s long imprisonment suggests the importance of The Daily Show. “It speaks to the desperation of the regime. And the truth is he wasn’t arrested because of that, he was arrested because they panicked, because people took to the streets [during 2009’s Green Revolution] and, as authoritarian regimes do, and we see it throughout [the world]—not just the Middle East, and not just Iran, this is everywhere. Every government has its levers of pressure that it applies to withhold information that it feels it does not want to make transparent.”

When you contribute to someone getting arrested you feel “closer” to them, Stewart says. “I think there was a certain narcissistic response on our part. Maziar was arrested, another fellow that we’d interviewed, an old revolutionary named Ibrahim Yazdi and a cleric named Abdi, all were arrested and they were the three that we spoke to. So we immediately jumped to the conclusion that this entire Green Movement somehow revolved around us,” he recalls.

“That was happily disabused very, very quickly. But that is the American response, which is: ‘We did this? We will fix this! Who should I invade?’ After meeting Maziar [in person], he is a very warm and compelling individual. We became friendly and it [Rosewater] began.”

He chose the great Gael Garcia Bernal, probably today’s leading Latino actor since Amores Perros, to portray the way Bahari retained his humanity. “Because solitary confinement, you know, you are removing sense from people, and their ability to interact. And so if you do not have a very well developed inner-life from which to draw from, you are lost. Maziar was able to compartmentalise it in a way that he could still retain a sense of humour at the utter absurdity at what was happening to him.”

Stewart says that’s the fulcrum on which Rosewater turns. “He reclaims his humanity in the darkest moment. Not through confrontation, not through opposition, but through those higher forms of human endeavour: dance, humour, things that bring us to more of an understanding and expression, a high form of expression. So you needed to be in those very dark scenes while retaining a certain sense of light and mischief, you know? And Gael was able to capture that in a way that was rare.”

Bahari tells me Leonard Cohen maintained him through solitary confinement. Bernal replies with that infectious Bernal smile when I tell him his scenes set to ‘Everybody Knows’ and ‘Dance Me to the End of Love’ resonated. “I think when we listen to Leonard Cohen’s music there is something about the literary aspect that comes to life strongly, a little bit like Bob Dylan as well. From the English-speaking world he is one of the most versed baroque writers and composers and his songs are very contagious.

“I knew when all the songs that Maziar mentions in the book that came to mind—it’s what happens when we share cultural references. I mean, ‘So Long Marianne’—which is the name of your daughter,” he gestures towards Bahari. “It was a song that I dedicated to my first girlfriend; I thought that was my discovery, you know? It was like I discovered this author.”

Stewart’s original idea was a film in Farsi, with an all Persian cast. “Maziar was the one who said, ‘I really don’t want to do that. I want it to be in English, and I want it to be as universal as it can possibly be, because these are issues that need to be seen as universal issues and need to be placed in as wide a context as we can place it.’

“And I agree with him, after speaking with him about it… I am not [Asghar] Farhadi, I could not do a nuanced [Farhadi film like The Past or A Separation]. Somebody from that area is going to see this as a simplistic or reductive version of what their lives are, but hopefully for audiences that are less familiar, it will be more nuanced and layered than they’re used to, and that’s the balance that we try to capture.”

Recently Stewart was slammed for criticising Israel. “It turns out people feel very passionately about that. It really caught me off guard. Turns out the Middle East is somewhat of a hotbed,” he laughs.

It’s difficult to get into the mindset of those who abuse Jews for criticising Israel, he adds. “I think that you can’t divorce people’s passion from a people’s history, and I think any people that have felt suffering and difficulty are going to cling to certain things in a more passionate way. That being said, I think the goal is the same. I don’t live in that region so in some ways I’m not probably justified to speak of it, but if I had a goal it would be a safe and secure Israel and a safe and secure Palestine. So the criticism may come from believing, I think, differently. But I imagine we just disagree on how to achieve that goal most effectively.”

Gael García Bernal and Jon Stewart on the set of Rosewater . . .

Read the whole thing at The Lumiere Reader

Alexander Bisley is an editor-at-large who has contributed in-depth interviews and more to The Lumière Reader since 2004. A backup film critic for Radio New Zealand, he’s written extensively for all of New Zealand’s leading publications, including North and South, the New Zealand Listener, and the New Zealand Herald. He also makes his living freelancing for top international publications, such as The Guardian, with outlets ranging from The Samoa Observer to The AV Club via Crikey and Informed Comment.