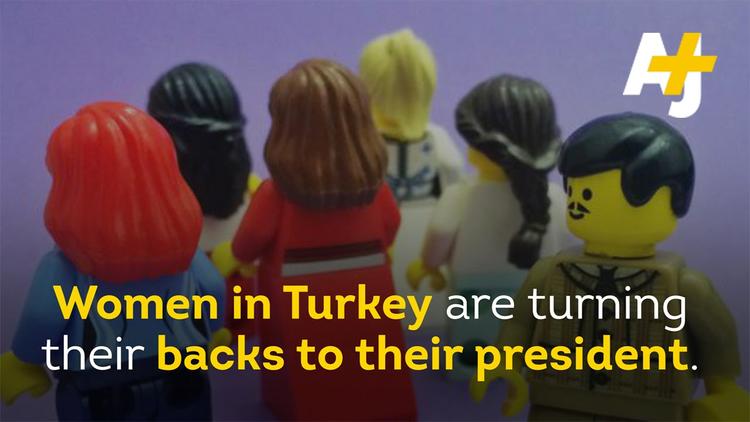 In Turkey, left of center and Kurdish women took to Twitter on Wednesday to post pictures of themselves turning their backs to President Tayyip Erdogan. The campaign came after Kurdish women supporting the HDP (People’s Democratic Party) turned their back to the president at a rally on Monday in the eastern part of the country. Erdogan paused to observe:

“It is very interesting that a group here… I beg your pardon but my decency does not permit me to put it another way… turned their backs on me while making the victory sign . . . If you have a modicum of politeness, honor and ability, then the place for politics is parliament,”

Dissident women objected that his remark had derogatory sexual overtones, and that he was saying that only elected officials have the right to engage in politics, i.e. he was advocating elective dictatorship. One Twitter poster put it bluntly:

A pres who tells women turning their backs on him they like it up the butt or being raped – between the lines – has 2 be fired! #turkey #akp

Another wrote was less gregarious:

The Twitter hashtag in Turkish, #sırtımızıdönüyoruz (“We are turning our backs”) trended to the number 3 position in Turkey and even got into the top ten internationally.

This Twitter donnybrook was not solely about gender. Erdogan typically out-polls his rivals with regard to the women’s vote, despite the conservative stances of his center-right Justice and Development Party (AKP). The reverse gender gap may derive from conservative women appreciating the party’s emphasis on family values and public order, and on educational and vocational training programs that benefit women. (Though some suspect that men are voting for their wives in rural areas, skewing the statistics). Turkish women appear to be outliers in world terms here, since in the developed world women tend to vote to the left of men. Even in India, women vote for the centrist Congress Party in greater numbers than for the religious-Right BJP, though there are substantial regional variations on that score. Punjabi and Gujarati women are more like the Turkish in preserving the conservative religious Right party.

So the women who posted pictures of themselves turning their backs were likely disproportionately supporters of the Kurdish HDP or the centrist nationalist party, the CHP (Republican People’s Party). Both are concerned about Erdogan’s turn to increasing authoritarianism in a pattern Fareed Zakariya has called “Putinism” (taming the press, using levers of state to punish critics and rivals, etc.) These parties are hoping to do well enough in Sunday’s parliamentary elections to deprive the ruling Justice and Development Party of enough seats unilaterally to change the country’s secular constitution.

Turkey, a country of 75 million, is the world’s 18th largest economy in nominal terms. It has a high literacy rate, but women’s literacy lags at about 91% whereas it is nearly universal among men. Pres. Erdogan and his wife Emine have conducted campaigns to help poor women complete high school (the more education Turkish women have, the more likely they are to have a job). Women’s workforce participation is very low at 27% (Greece, which has the lowest proportion of women in the work force in Europe is at about 40%). Only 14% of legislators is women and only 9% of the higher bureaucracy is. There is only one woman cabinet member in the government of PM Ahmet Davutoglu.