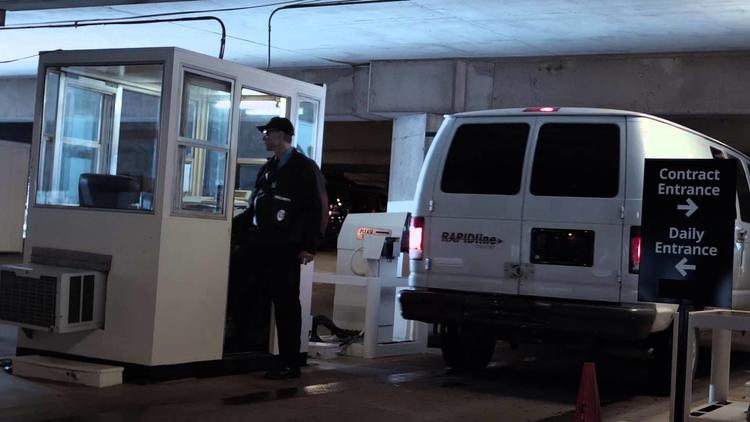 “A tight-knit group of neocon dead-enders is pushing Iran to the forefront of the GOP's foreign policy agenda.”

In a recent TV ad, a van snakes its way through an American city. As the driver fiddles with the radio dial, dire warnings about the perils of a “nuclear Iran” spill out of the speaker from Senator Lindsey Graham and Israeli Prime Minister Benjamin Netanyahu.

The driver then steers the vehicle into a parking garage, drives to the top level, and blows it up in a blinding flash of white light. Words shimmer across the screen: “No Iran Nuclear Treaty Without Congressional Approval.”

While diplomats from Iran and the “P5+1″ world powers work to forge a peaceful resolution to the decade-long standoff over Iran’s nuclear enrichment program, a well-financed network of “experts” — like the “American Security Initiative” that produced the above “Special Delivery” ad — is dedicating enormous amounts of time and energy to weakening public support for the talks in the United States.

These think-tank gurus, special interest groups, and media pundits have peddled a plethora of alarmist narratives aimed at scuttling the diplomatic process — and they’ve relied far more on fear mongering than facts.

So who are these people?

Despite their bipartisan façade, these reflexively anti-Iran ideologues are in reality a tight-knit group. Many were also prominent supporters of the Iraq War and other foreign policy debacles from the last 15 years. They work in close coordination with one another and are often bankrolled by similar funders.

Four GOP super-donors alone — the billionaires Sheldon Adelson, Paul Singer, Bernard Marcus, and Seth Klarman — keep afloat an array of groups that ceaselessly advocate confrontation with Iran, like the Foundation for Defense of Democracies, the American Enterprise Institute, and the Washington Institute for Near East Policy.

Other groups forming the core of this network include the neoconservative Hudson Institute and the Foreign Policy Initiative, as well as more explicitly hardline “pro-Israel” groups like the American Israel Public Affairs Committee, the Republican Jewish Coalition, the Emergency Committee for Israel, The Israel Project, and the Jewish Institute for National Security Affairs.

Several of these outfits also rely on right-wing grant-making foundations such as the Lynde and Harry Bradley Foundation and the Scaife Foundations, which together funnel millions into hardline policy shops.

Together these groups have established what amounts to their own echo chamber. They’ve built an anti-Iran communications and lobbying infrastructure that enjoys substantial influence in Washington’s corridors of power, particularly in Congress.

One of this network’s more prominent beneficiaries has been Senator Tom Cotton (R-AR), a through-and-through neocon disciple whose truculent opposition to the Iran talks has given pause to even conservative figures like Fox News’ Megyn Kelly, who asked him what the “point” was of his infamous open letter to Iran last March that was signed by 47 Senate Republicans. Other prominent senators with close ties to this network include Cotton’s Republican colleagues Lindsey Graham, Mark Kirk, Kelly Ayotte, and John McCain.

Cotton’s successful run for Senate last year came on the heels of massive financial contributions he received from key members of the anti-Iran lobby, including Bill Kristol’s Emergency Committee for Israel, which spent roughly $1 million to get Cotton elected. Adelson, Singer, and Klarman, as well as the PAC run by former UN ambassador and avowed militarist John Bolton, also contributed significantly to Cotton’s campaign.

While some pundits and politicians say they’re looking for a “better deal” with Iran than the one the Obama administration has negotiated, Cotton has explicitly said that he’s looking for no deal at all. He’s called an end to the nuclear negotiations an “intended consequence” of legislation he’s supported to impose new sanctions on Iran and give Congress an up-or-down vote on the agreement.

In the think tank world, talking heads like the Hudson Institute’s Michael Doran and the Foundation for Defense of Democracies’ Mark Dubowitz and Clifford May still prefer the more cautious “better deal” framing. But discerning readers will quickly realize that their motives are bent towards pushing the United States into conflict with Iran.

Doran — who in the past has compared the Middle East to a “disease” and argued that “a bias toward military action is the best way to treat” it — has been one of the leading purveyors of the idea that the Obama administration’s nuclear negotiations with Iran are geared towards turning Iran into “a friend and a partner,” which he frames as essentially akin to the sky falling.

In April, he lambasted this supposed strategic aim of the Obama White House in hysterical terms, writing that détente with Iran “will deliver disequilibrium, the exact opposite of the effect intended. By negotiating an arms-control agreement, the president has shifted the tectonic plates of the Middle East order.” He added: “And for tectonic plates, it takes a move of just inches to level whole cities.”

So Doran’s answer is either a disastrous war or somehow applying more sanctions on Iran. How he intends to apply these sanctions given the fragile nature of the current sanctions regime and almost certain opposition from the rest of the P5+1 remains a mystery. Perhaps more concessions to Russia? Doran surely also knows that outside of harming ordinary Iranian citizens, sanctions have been a resolute failure in getting Iran to cease its uranium enrichment or change its fundamental strategic calculations with respect to its nuclear program.

Doran’s doomsday preaching is in fact the modus operandi of the deal’s critics. Clifford May, the president of the Foundation for Defense of Democracies (FDD), has posited that “Mr. Obama is prepared to accept a deal that will be dangerous for America and the West — and, yes, life-threatening for Israel.” He has also wildly claimed that Iran, were it to develop nuclear weapons, “might provide a bomb to al-Qaeda,” the Sunni organization that is its avowed enemy.

Mark Dubowitz, FDD’s executive director, appears frequently in the media and before Congress lambasting the nuclear talks. He’s called the framework agreement between Iran and the P5+1 a “seriously flawed” deal and made no secret of his alternative to the tentative agreement: “Critics of Mr. Obama’s efforts are going to get lost in the technical details of this ‘framework’ agreement,” he wrote in a recent Wall Street Journal op-ed co-authored with fellow Iran hawk Reul Marc Gerecht. But “the ultimate issue remains: Are you willing to threaten war to get a better deal, and prepared to preventively strike if Tehran moves toward a bomb?”

As the Republican primaries kick off for the 2016 presidential election, the candidates are doing their utmost to pander to these hawks — and especially to their donors.

Sheldon Adelson, whose massive spending on Republican candidates in the past has steered the foreign policy debate of entire campaigns, stands out in this regard. His annual gathering hosted by the Republican Jewish Coalition in Las Vegas, which has become known as the “Adelson primary,” has seen Republican trying to out-hawk each other to win his support.

At times, the race for Adelson’s support has pushed the candidates into politically shaky territory.

Prospective candidate Jeb Bush, for example, fell out of favor with Adelson for appointing former Secretary of State James Baker — a foreign policy realist disliked by the party’s neoconservative wing — as one of the few non-neocons on his foreign policy team. Soon after, Adelson exalted former President George W. Bush “for all he’d done for Israel and the Middle East,” prompting the younger Bush to declare that he looks to his brother for advice on the Middle East — hardly a source of comfort to the non-Adelson wing of the party. Later, the former Florida governor even said he would he would have authorized the Iraq War even “knowing what we know now.”

“The Las Vegas mogul and Israel hawk,” Joan Walsh of Salon wrote of Adelson, “thus took Bush’s biggest political problem — his brother — and made him an asset.”

Florida Senator Marco Rubio, the aspiring Republican presidential nominee who’s been one of the Senate’s biggest critics of the Obama administration’s diplomacy with Iran and Cuba, has been a major recipient of donations from Adelson and Singer. A recent report by Politico suggests that Rubio “has emerged as the clear front-runner” to win the “Sheldon Adelson primary.”

Of course, virtually all of the characters and organizations above were emphatic supporters of the Iraq War. In examining their work, it becomes clear that military force, particularly in the Middle East, is the default tool they advocate for to deal with real or perceived threats.

In the case of the Iran nuclear negotiations, this has proven to be the case even when more long-lasting alternatives exist — like diplomacy — that better secure U.S. interests.

If, as John Lewis Gaddis said, strategy is “the discipline of achieving desired ends through the most efficient use of available means,” and the desired end of this militaristic faction is to maximize U.S. national security, their recommended strategies have clearly been abysmal failures.

The Iraq War they so fiercely championed, for instance, was a debacle that greatly weakened the American position in the Middle East at a cost of hundreds of thousands of lives. Ironically, that war was in large measure responsible for strengthening Iran’s hand in the region — the very thing these hawks say a new war is necessary to address.

A nuclear deal with Iran presents the opportunity to avoid another catastrophic war in the Middle East and potentially opens the door to working with Iran on critical areas of mutual interest, such as Iraq and Afghanistan.

Yet by so vigorously denouncing the Obama White House’s negotiations with Iran, these armchair warriors are pushing for a war that wouldn’t only be terrible for the region and the people who live there. It would harvest more lives and limbs from American soldiers, waste trillions more taxpayer dollars, and undoubtedly erode U.S. standing in the world even further.

Sina Toossi is the assistant editor of Right Web, a project that monitors the efforts of militarists to influence U.S. foreign policy.

From last month, IN the NOW with Anissa Naouai: ” Sheldon Adelson wants to nuke Iran, GOP sucks up”