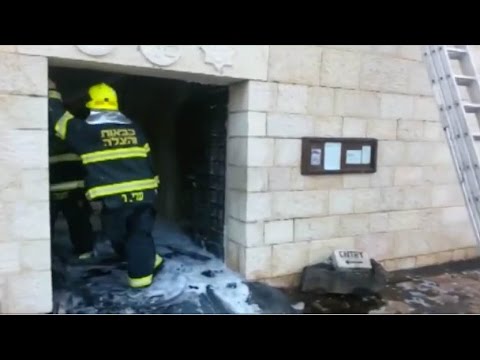 The arson attack struck the Church of the Multiplication at Tabgha, on the shores of the Sea of Galilee, where many Christians believe Jesus fed the 5,000 in the miracle of the five loaves and two fish.

A church adviser blamed Jewish extremists for the incident and police later said they had detained 16 youths from settlements in the occupied West Bank for questioning.

“In an area near the church, 16 youths were detained for investigation in order to check their involvement in the incident before dawn,” police spokeswoman Luba Samri said in a statement.

She said 10 of those detained were from Yitzhar, which is known as a bastion of extremists and where residents have been involved in previous hate crimes.

Israeli security forces estimated that the majority of incidents during a 2014 wave of anti-Palestinian hate crimes were carried out by Yitzhar residents, according to reports by Israeli media site Haaretz.

A member of the Roman Catholic Benedictine order, which manages the site, said one of the buildings within the compound was completely destroyed in the blaze but the church itself was not damaged.

Hebrew graffiti was found on another building within the complex, reading “Idols will be cast out” or destroyed, AFP correspondence reports. The text is part of a common Jewish prayer.

Wadie Abu Nasser, an adviser to the Roman Catholic Church in the Holy Land, said the arson attack would reverberate throughout the Christian world.

Responding to the attack on the holy shrine, Prime Minister Benjamin Netanyahu said “this morning’s outrageous arson attack on a church is an attack on us all.”

“Those responsible for this despicable crime will face the full force of the law,” he said in a statement. “Israel’s global image will be harmed,” he told Israeli public radio.

“When you put one and one together, between the graffiti and the arson, you can reach a conclusion regarding the potential suspects.”

Despite Netanyahu’s vow to hold the perpetrators accountable, police spokesperson Samri told AFP that the youths suspected for Thursday’s attack were released shortly after being detained without charge, after providing statements to the authorities.

Tabgha was subjected to a previous attack in April 2014 in which church officials said a group of religious Jewish teenagers had damaged crosses and attacked clergy.

There has been a long line of attacks on Christian and Muslim holy places in both Israel and the West Bank, in which the perpetrators are believed to have been Jewish extremists.

The so-called “price-tag” attacks are often carried out against the Israeli military and Palestinian property, Muslim and Christian alike, in retribution for perceived action against the Jewish-only settlement enterprise throughout the occupied West Bank and East Jerusalem.

In April, vandals smashed gravestones at a Maronite Christian cemetery near Israel’s northern border with Lebanon.

That incident prompted Israeli president Reuven Rivlin to meet church leaders and pledge a crackdown on religiously inspired hate crime, however few have been convicted since the move.

The US State Department’s 2013 Country Reports on Terrorism included price-tag attacks for the first time, citing UN figures of some “399 attacks by extremist Israeli settlers that resulted in Palestinian injuries or property damage.”

Such attacks were “largely unprosecuted,” it said.

Thursday’s attack and subsequent lack of due process was condemned by the Higher Presidential Committee of Churches affairs in Palestine.

“The culture of impunity that has been granted to Israel has allowed Israeli extremists to escalate their racist attacks against Palestinians and degrade our holy sites without any legal accountability,” the committee said in a statement.

“The Presidential Committee calls upon the international community to take series of actions to immediately stop the systematic attacks against our holy sites.”