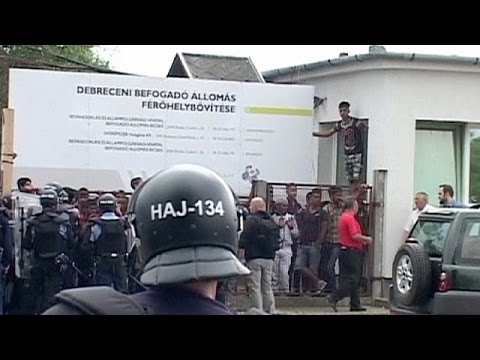 These days, the park flanking Belgrade’s bus terminal and the nearby railway station teems with migrants.

They are from Syria, Afghanistan, Iraq, or Somalia, and they are on the last leg of a grueling journey they hope will take them to the European Union.

Inside the bus terminal, dozens of haggard-looking migrants, many with young children, are waiting for the bus to Subotica. From this town in northern Serbia, which lies just a few kilometers from EU member Hungary, they will try to cross into the European Union.

When the bus rolls in, a group of about 15 men, most of them very young, group outside the door holding their tickets.

The driver waits before letting them in. “Tickets!” he then barks.

Back Of The Bus

Without a word, he directs them towards the back of the bus — without even glancing at their seat numbers.

When I board the bus, the driver lights up. “Hello!” he chirps, politely inviting me to take a seat in the front. My seat number, however, is 25 — right in the back of the bus.

Asked why he is seating me in the front, the driver tells me to just do as I’m told.

By the time everyone is seated, the arrangement is clear: the Serbian passengers all sit in the front, while all the migrants sit in the back.

But the migrants know better than to complain; they seem grateful to even be on that bus. They sit in silence, looking fixedly at the road.

I get up and sit next to a young migrant. His name is Mohammad, he is 16.

“I’m from Afghanistan and I’m going to Germany for work,” he tells me in broken English. “First I will go to Hungary, I have a friend there.”

Behind us, the others start smiling and peering at us. Mohammad is travelling with a 13-year-old girl and another teenage boy. Unlike him, they don’t speak any English.

“The situation in Afghanistan is very bad because of the Taliban fighting, and it’s getting worse every day,” Mohammad continues. “My mother, my father, and my sister stayed behind. They are very poor.”

Asked whether he has enough food and clothes, Mohammad grows stern.

He shows me his satchel and insists that he has everything he needs. When I offer him and his friends a bag of crisps, they all politely decline.

“We will be seeing more and more of this,” Dragan Popovic, from the Center for Practical Policy, says with a sigh. “We are robbing these people, making money out of them, or sending them on their way so they don’t bother us here.”

Zeljko Stanetic, an analyst at the Civic Center in Vojvodina, says he recently saw graffiti in Novi Sad, Serbia’s second-largest city, calling on the country to “throw immigrants in the trash.”

The number of migrants and refugees from Syria, Afghanistan, Egypt, Eritrea, Iraq, Nigeria, Somalia, Sudan, and Tunisia, travelling overland through the Balkans on their way to the EU has dramatically increased in recent years.

The number of people apprehended crossing the Serbia-Hungary border alone has risen by more than 2,500 percent since 2010 — from 2,370 to 60,602, according to an Amnesty International report.

We arrive in Subotica.

At the bus station, three Afghan men are trying to buy bottled water from a kiosk. The vendor slams the door shut, locks up the store, and walks off.

Across from the kiosk, taxi drivers are waiting for the latest batch of refugees.

Subotica taxis have been known to cheat migrants by charging them $50 before dropping them off near a forest a few kilometers away, telling them they have arrived at the border.

A group of Afghans I meet at the station decides to walk the 10 kilometers separating them from Hungary. If they are lucky, they will be able to pass unnoticed by border guards and will be one step closer to realizing their most cherished dream: a safe life in the European Union.

“It’s nothing,” says one of them. “It took us 35 hours to reach Iran, we walked through the desert without water, food, or anything else. Then we traveled six days from Turkey to Bulgaria. After Bulgaria, we came to Serbia. I set off two months ago.”