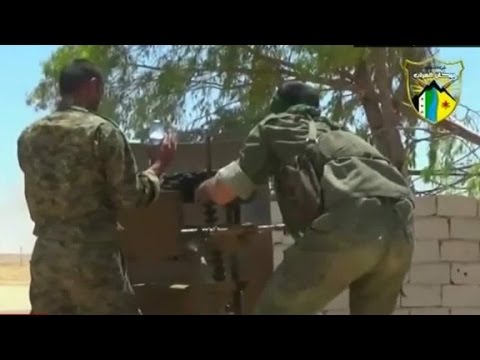 The unfolding intervention against the Islamic State shows that oil doesn't just guide U.S. foreign policy. It constrains our ways of thinking about it.

Foreign intervention is 100 times more likely if oil reserves are present in a country experiencing civil war. That’s the conclusion of Vincenzo Bove of the University of Warwick, co-author of a recent study published in the Journal of Conflict Resolution.

“Before the ISIS forces approached the oil-rich Kurdish north of Iraq, ISIS was barely mentioned in the news,” Bove points out. “But once ISIS got near oil fields, the siege of Kobani in Syria became a headline and the U.S. sent drones to strike ISIS targets.”

Bove is not identifying something new. The “American Century,” a phrase popularized by Henry Luce in Life circa 1941, entailed U.S. ownership and control of oil. From 1920 to 1970, the United States produced two-thirds of the world’s crude oil and housed five of the seven major oil conglomerates that dominated the oil industry.

Yet if crude oil was foundational to U.S. military predominance, it has now proved to be the Achilles heel of strategic interests. Oil is quite literally fueling our newest enemy, the Islamic State (ISIS), in its expansion into Iraq and control of small oilrigs. In the world of U.S. hegemony, oil not only guides our foreign policy but constrains our ways of thinking about it.

The Islamic State’s seizure of Tikrit and the surrounding oil fields in Ajil and Himrin after the fall of Mosul last summer dramatically changed the U.S. military posture in Iraq.

President Obama waited nine months before formally asking Congress for an authorization for the use of military force (AUMF). However, U.S. service members already deployed in the region were engaging ISIS as early as June 15, 2014 — just four days after Tikrit fell and, along with it, partial control of Iraqi oil. News reports surfaced as early as July that ISIS was earning $1 million a day from its control over marginal oilrigs. By August, CNN warned that the figure was now closer to $3 million a day. Oil quickly became the centerpiece of the media narrative about ISIS, with little else making headlines.

Arguments for President Obama’s intervention against ISIS and the continuation of the war on terrorism oscillate between humanitarian reasons and winning the “ideological war” against ISIS.

That every major power justifies its actions on humanitarian grounds is a truism, as Noam Chomsky aptly points out in his book Hegemony or Survival. The first narrative focused on an imminent humanitarian catastrophe when ISIS forces trapped an estimated 35,000 to 50,000 Yazidis, a religious minority, on Sinjar Mountain on August 7, 2015. President Obama responded by announcing strategic airstrikes but pledged not to allow “the United States to be dragged into fighting another war in Iraq.” A humanitarian intervention was staged on the alleged grounds of protecting the Yazidis. No U.S. citizens were at risk. Yet on September 10 the rhetoric of war dramatically shifted as Obama pledged to “degrade and ultimately destroy” ISIS.

This rhetorical moment was more than just a change in counterterror strategy. It was an affirmation of U.S. oil interests in the MENA region. Since 1976, according to Roger Stern, professor of energy and security at the University of Tulsa, the United States has spent roughly $7.3 trillion in military expenditures to maintain access to oil in the region. The latest venture, as Steve Coll suggested in The New Yorker, was not about saving the Yazidis but protecting oil-rich Erbil, the capital of the Kurdish Regional Government — where top American oil conglomerates such as ExxonMobil and Chevron have production fields.

The second line of reasoning, the so-called “ideological war” justification, was applied to protecting U.S. citizens from terrorist threats from abroad. The Islamic State “could pose a growing threat beyond the region, including to the U.S. homeland,” as President Obama said, which was less jingoistic than his predecessor but still based on the tacit assumption of us versus them.

The “ideological war” justification has longstanding problems. The well-known story of U.S. funding, training, and overall support for the Afghan mujahedeen to fight the Soviet Union in the 1980s demonstrates the blowback effects of U.S. policy in the region. USAID funding, for example, was used to create textbooks celebrating the mutilation of Soviet troops in the name of theology. The connection of distorted theology and terrorism was solidified in Afghanistan with U.S. support. It’s no stretch to say that Islamic terrorism was, and continues to be, a byproduct of the Cold War.

But even the recent war on terrorism is problematic. Pentagon officials knew at least a year before ISIS launched its campaign that NATO-trained “moderate” Free Syrian Army rebels were defecting to ISIS or al-Qaeda to fight Assad, but the United States continued to fund them anyway. Turkey, a major U.S. NATO ally, was sponsoring ISIS with military and medical equipment while working with the United States to train 15,000 Syrian rebels.

The connections between U.S. efforts to curb Islamic terrorism and the reproduction of the extremist ideology are astounding. In the name of fighting terrorism, the United States invariably creates more terrorism.

Intersection of Oil and Humanitarianism

President Obama views U.S. oil interests and humanitarian efforts as one and the same. As such, Washington believes that curbing ISIS’ access to oil will decrease the size of the organization and, with it, the possibility of civilian causalities. At the same time, the United States will attempt to increase U.S. access to oil with the understanding that American corporate power and decision-making will expand the size of the economic pie for all.

This second half of this strategy was applied during the Iraq War when KBR, a subsidiary of Halliburton — an oil exploration company that former Vice President Dick Cheney served as chairman and CEO of — received $39.5 billion in federal contracts for reconstruction and oil production and expansion. In the eyes of U.S. policymakers, private oil conglomerates were integral to rebuilding Iraq and achieving the stated goals of constructing democracy.

According to this approach to foreign policy, the purpose of restricting ISIS’ oil access becomes the end itself, equivalent to protecting civilians and ensuring world peace. But fighting over access to oil, in this case by the United States, was a major precipitating factor for the earlier military intervention in Iraq and the civil strife and bloodshed that followed. The market for oil, with U.S. consumption rounding nearly 18.6 million barrels per day, can’t in the end be divorced from any U.S. interest in human rights.

In September 2014, the U.S. Senate Committee on Energy and Resources dedicated an entire public brief to outlining “The Problem of ISIS Oil Sales.” They were searching for answers to how oil could possibly fund our enemies (Who is buying it? Why?), instead of examining why oil motivations for the Iraq War created structural pressures and instability in the region that needed to be addressed by any coalition vying for power.

As an integral component to U.S. consumer capitalism, oil steers U.S. foreign policy and often functions as a tool of American nation building, at home and abroad. Although oil has served as an underlying rationale for the use of military force, the black hydrocarbon has no nationalist ties. Its awesome power is now being harnessed against the United States. Cutting ISIS’ access to oil is not the solution to this problem. Fighting over access to oil, after all, helped create the social and political environment that gave birth to ISIS. History repeats with appalling consistency.

Jack Werner has been published by Antiwar.com, the Lion’s Eye, the Signal, and State of Nature. He hosts a webzine at worldatlargemag.wordpress.com.