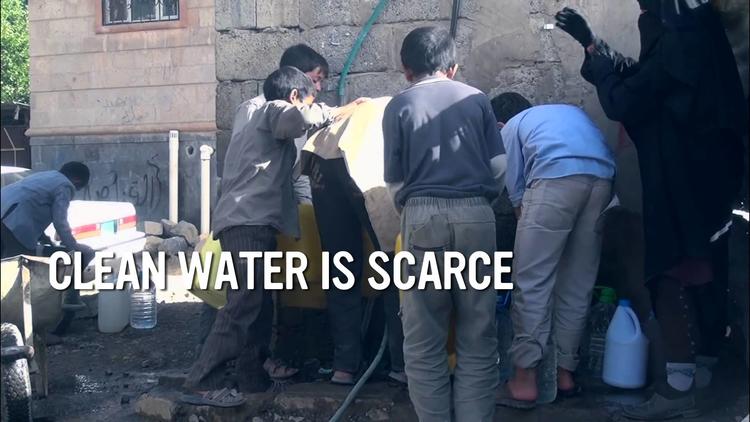 UNITED NATIONS (IPS) – Whether in Palestine, Ukraine or Somalia, wars result in millions of children threatened by the brutality of armed conflict.

The numbers speak for themselves: more than 300,000 child soldiers are currently exploited in situations of armed conflict and six million children have been severely injured or permanently disabled, according to UNICEF.

Former child soldiers enlisted by Al Shabaab are handed over to the UN Children’s Fund (UNICEF) after their capture by forces of the African Union Mission in Somalia (AMISOM). Credit: UN Photo/Tobin Jones

The past year was one of the worst ever for children affected by armed conflict due the alarming rise in abductions, especially mass abductions, of children and adults in Nigeria, Iraq, Syria and South Sudan.

Likewise, an estimated 20 million children are living as refugees in neighbouring countries or are internally displaced within their own national borders as a result of conflict and human rights violations.

And the U.N. Secretary General’s most recent report, published on June 5, shows that in too many countries, the situation for children is getting worse, not better.

“There is still room at the individual agency level to strengthen safeguards towards prevention of child rights violations,” Dragica Mikavica, advocacy officer of Watchlist, a network of international non-governmental organisations, told IPS.

“For instance, more recently, Watchlist has been lobbying for the U.N.’s Department of Peacekeeping Operations (DPKO) to develop a policy that would ban states placed on the Secretary-General’s ‘list of shame’ from contributing troops to peacekeeping forces in other countries,” she added.

“When governments or armed groups refuse to agree to such steps and continue abuses, the Security Council could be much more aggressive in imposing targeted sanctions, such as arms embargoes, or travel bans and asset freezes on the leaders of such groups,” she told IPS.

“The SC should also refer such cases to the International Criminal Court for investigation and possible prosecution,” she added.

The past year was one of the worst ever for children affected by armed conflict due the alarming rise in abductions, especially mass abductions, of children and adults in Nigeria, Iraq, Syria and South Sudan.

In addition to kidnappings, thousands of children were killed last year in different parts of the world.

In Iraq, for example, 2014 was the deadliest year for children since the U.N. first started systematically documenting violations against children in 2008, with nearly 700 children killed and almost 1,300 abducted – and these are only the recorded cases.

Likewise, in Palestine, the number of children killed by Israeli forces jumped to 557, more than the number killed in the last two military operations there combined.
Related IPS Articles

U.N. Security Council Focuses on Children as Victims of Armed Groups
Opinion: A Year of Progress for “Children, Not Soldiers”
Israel, Hamas Escape U.N.’s List of Shame on Attacks on Children

In order to step up the fight against this violence, the U.N. Security Council unanimously adopted on June 18 Resolution 2225, which strengthens the international community’s mobilisation in support of children in armed conflict and condemns their abduction.

The resolution, tabled by Malaysia and sponsored by 56 member states, added abductions as the fifth violation that can trigger a listing of a party to the conflict to the Secretary-General’s “list of shame”.

This list facilitates greater monitoring of abductions and ensures that parties which engage in this particular crime are included on it. Once listed, the U.N. is able to engage the listed parties in negotiating action plans to stop this and other violations from occurring.

The vast majority of these abductions are carried out by non-state groups, including terrorist organisations such as Boko Haram and ISIS, which see mass kidnapping as a shining symbol of success.

Raising the profile of the abduction of children at the highest level – such as in form of a Security Council resolution – also endows child protection actors with greater capacity to advocate for response surrounding this egregious violation.

However, as UNICEF Deputy Executive Director Yoka Brandt argues, abduction is often only the first in a series of grave violations, followed by sexual assault and rape, indoctrination, recruitment as child soldiers and murder.

“Each offence blights that child. It robs her of her childhood and threatens her ability to live a full and productive life,” she said in an open debate on Children and Armed Conflict at the Security Council on June 18.

Brandt also stressed the importance of providing critical support to children after their release so they can resume “normal life”.

“These children are victims and must be treated as such. They’re inevitably burdened by physical wounds and psychological scars,” she said.

Raising awareness remains a critical point in the battle against the brutality suffered by children in situations of armed conflict.

Social media has proven a valuable tool for raising the public profile of the atrocities committed against children, especially mass abductions in contexts like Nigeria, Syria and Iraq.

“Social media contributed to internal U.N. debates around abductions of children, as the world could not turn a blind eye on what was happening to children last year,” Mikavica told IPS.

“All of this resulted in concrete actions by the Council at the last Open Debate as seen through trigger expansion,” she added.

However, as Becker told IPS, it’s important to keep in mind that although social media has been exceptionally effective in raising awareness of mass abductions of children by Boko Haram and other armed groups, it’s just a tool, not a substitute for action, which remains the real challenge for the U.N. and other international organisations.

from last month: “A race against time for millions of Yemeni children | UNICEF”