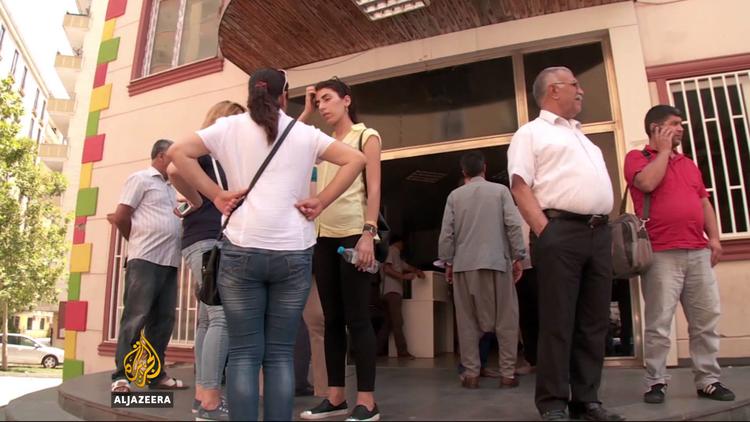 The recent surge of violence in Turkey following the massacre of socialist activists in Suruc has brought Turkey perilously close to an all-out conflict with the Kurds.

Turkey has begun regular air strikes targeting the bases of the Kurdistan Workers’ Party (PKK) guerrillas as part of its broader “war on terror”, which has also included action against Islamic State (IS) and the left-wing Revolutionary People’s Liberation Party-Front (DHKPC). So far, more than 1,000 people have been detained in Turkey. That number includes many trade unionists – and there are growing fears that non-violent dissidents will be targeted.

Turkey’s effort to tie its campaign against the PKK to the international campaign against IS is widely seen as a ploy to make its actions against the Kurds more internationally legitimate. Turkey seems to have convinced the US of the need to create a de-facto safe zone on the border with Syria, a long-held Turkish plan to prevent Kurdish autonomous regions from joining one to another. The Kurds view that plan with deep suspicion, seeing it as a push to undermine their achievements in Syria.

While the trigger points of Turkey’s conflict with the PKK in the past year have all been connected to the developments in Syria, it’s worth remembering that the conflict has a much deeper history.

Since the early 1980s, the PKK has been the main force in the Turkish-Kurdish conflict. It began its insurgency against Turkey in 1984, mounting guerrilla attacks against the security forces between 1984 and 1999. Ever since the capture and imprisonment of PKK leader Abdullah Öcalan in 1999, Turkish governments have introduced some minor reforms to broaden Kurdish rights in Turkey.

The violence has simmered down, with the PKK abandoning armed conflict in favour of political struggle for long periods. That said, during the past decade, the PKK has resorted to violence on a number of occasions – but this has always been followed by periods of inactivity.

Overall, the PKK maintains its commitment to peaceful political resolution of the conflict, but retains its estimated 5,000 strong guerrilla force, some of which is positioned inside Turkey.

The total number of casualties in the conflict is thought to be more than 45,000. The state has carried out many large-scale operations against the PKK, but without much success. The PKK has proved to be an extremely resilient organisation able to exploit general regional developments to its advantage.

The dialogue between Ankara and the PKK has continued over the past two and a half years and has produced positive outcomes. A ceasefire was declared on March 21 2013, and an agreement on the plan for future negotiations was made public in February 2015.

The PKK’s capacity to use violence and its occasional attacks have been cited by the Turkish government as reasons why a military approach is needed. Ankara has set withdrawal of the PKK guerrillas from Turkey and the conclusion of the armed struggle against Turkey as the basic conditions for restarting the peace process.

Kurds versus the AKP

As things stand, Kurdish demands cannot be accommodated within Turkey. A form of self-rule for the Kurds – which can be achieved through decentralisation of state structure in Turkey and devolution of power to regional level, the recognition of Kurdish cultural and linguistic rights (such as Kurdish-language education) and reforms to strengthen democracy and pluralism – would go a long way in satisfying Kurdish demands.

The escalation came after the pro-Kurdish Peoples’ Democratic Party (HDP) performed strongly in the recent elections winning sufficient support to send 80 MPs to Turkish parliament and raising hopes that the peace process would finally take a step forward.

All round, the HDP has dented the ruling Justice and Development Party (AKP)’s hopes of consolidating its hegemony, which has been challenged on a number of fronts since the Gezi Park protests broke out in May 2013. Most importantly, the HDP’s success kept the AKP from winning the parliamentary majority it needed to introduce the presidential form of government for which it had been campaigning.

Meanwhile, in Syria, Kurdish forces have managed to repel IS attacks and consolidate their three autonomous regions, collectively known as the Cantons of Rojava. Their success reduces the likelihood of moulding post-conflict Syria into a state shaped by Turkey’s vision of the region.

The Rojava project is achieved under the guidance and leadership of the Democratic Union Party. This party has an ideological affiliation with the PKK but is a separate entity, and the international powers treat it as such – but Turkey treats it as a terror organisation, worried as it is that Rojava’s success will increase the PKK’s power as a regional actor and permanently change the game in the Kurds’ favour.

The recent developments in Turkey and Syria make the Kurds the main barrier to the goverment’s ambitions for both Turkey and the wider region. Present indications are that actions against the PKK will be extended to include the HDP and that pro-Kurdish representation in the parliament will be eliminated. The debate in Turkey’s mainstream media following the attacks against the PKK has already begun to marginalise the HDP and implicate them in the latest violence, and the Supreme Court has begun an investigation into the HDP that could result in its closure and the possible imprisonment of senior MPs.

In Syria, the Kurdish forces have complained that Turkey has attacked their defence positions and it is possible that Turkey’s actions will be expanded to include the Rojava Cantons.

Starting a large-scale campaign against the Kurds could have unpredictable consequences and further increase the instability in the region. For that reason Turkey will face domestic and international opposition. However, without a workable plan to put the peace process on track, the ongoing tensions will further escalate the conflict.

Cengiz Gunes is Associate Lecturer, Faculty of Social Science at The Open University.

Cengiz Gunes is Associate Lecturer, Faculty of Social Science at The Open University