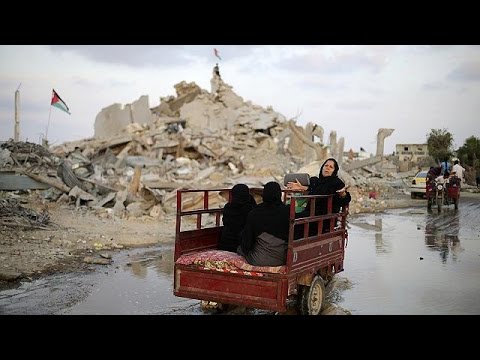 Israel invokes the privileges of engaging in international armed conflict but denies Palestinians their corresponding entitlements under the same body of law. This is the colonial nature of Israel’s legal logic.

One year after the onslaught of violence Israel called “Operation Protective Edge,” Gaza is still in ruins. Infrastructure, homes, and psyches destroyed by the assault remain shattered; according to Oxfam International, it could take more than 100 years to rebuild Gaza’s housing, education, and health infrastructure at the current rate of reconstruction. This state of unrepaired—irreparable—destruction testifies to the suffocating, stultifying effect of Israel’s siege of Gaza. In 2007, Israel imposed a policy of land closure on the Gaza Strip, severely restricting the movement of people and goods in and out of the territory as a punishment for Hamas’s 2006 electoral victory. A naval blockade followed in 2009, tightening the vice on the besieged population.

Under the land-and-sea blockade, Israel has deprived the population of food, medical supplies, and building equipment—not to mention a long, sundry list of other basics items (light bulbs and baby formula, mattresses and blankets, shampoo and conditioner). The naval blockade is Israel’s legal justification for the interception of successive Freedom Flotillas carrying humanitarian aid to Gaza: interceptions which would otherwise contravene the freedom of the high seas in international law.

Legal experts have decried the unlawfulness of Israel’s blockade under international humanitarian law (the technical term for the laws of war): because it violates the restriction on blockades with the purpose or effect of civilian starvation; because it violates the prohibition on collective punishment of civilian populations during war; because it violates Israel’s obligation as an occupying power to ensure adequate supply of food and medicine to the occupied. (Israel denies that it occupies Gaza, because it formally withdrew from the territory in 2005. However, due to Israel’s continued exertion of multiple forms of power in the Gaza Strip—including control of the territory’s land crossings, territorial waters, airspace, telecommunications, and electricity; deployment of military incursions, rocket attacks, and sonic booms; management of the Palestinian Population Registry; and regular exercise of its capacity to invade Gaza, and arrest and prosecute its residents—multiple authorities have concluded that Gaza is still occupied.)

But beyond the question of legality or illegality, Israel’s appeal to international law to justify the naval blockade disturbingly, but tellingly, resembles European colonial powers’ use of international law in the nineteenth and twentieth centuries: to legitimise the violence of the colonisers, and delegitimise the resistance of the colonised. In its profound asymmetry, Israel’s approach to this somewhat obscure, technical legal question illuminates something of its colonial logic.

Israel: having its legal cake and eating it

Israeli government officials claim that the sea blockade is in compliance with international law, insisting that a sea blockade is an accepted means of warfare according to the laws of armed conflict. However, international law only permits naval blockades in the context of international armed conflict, a special legal category of conflict that imposes a framework of reciprocal rights and obligations on warring parties. Under the law of international armed conflict, fighters on both sides are recognised as privileged combatants: they can legally kill opposing combatants, and can be targeted for attack; they are entitled to be treated as prisoners of war (not insurgents or criminals) if captured. And territories and populations occupied in international armed conflicts are shielded by the relatively robust rules of the Fourth Geneva Convention: occupying powers must treat the occupied civilian population humanely, and protect it from violence; occupiers can only use force necessary for maintaining law and order; and they must guarantee that occupied territories are provided with food and medical supplies.

But Israel categorically refuses Palestinians the status of legitimate combatants. Instead, Palestinian fighters are treated as “unlawful combatants”: a concocted legal category of individuals who may be targeted for assassination, but enjoy none of the rights of lawful combatants. For example, unlike lawful combatants, Palestinian “unlawful combatants” can be criminally prosecuted, and administratively detained indefinitely. And Israel has constructed this category broadly to include all active members of “terrorist organisations” (with “terrorist organisations” also defined expansively), ensnaring those who would normally be protected in international law as civilians. In international humanitarian law there are combatants—who may kill and be killed—and civilians—who may not kill and may not be targeted for killing (unless they are “directly participating in hostilities”).

To exercise right without restriction: this is the fundamental asymmetry of Israel’s colonial legal logic.

In Gaza, for Israel, there are only “terrorists”—who may be killed but may never kill, who may be subject to seemingly unlimited death and destruction but may not legally use force themselves.

And Israel disavows its obligations as an occupying power, insisting that Gaza is not occupied. Instead, Israel has labelled Gaza a non-sovereign “hostile territory”: another concocted legal category, which Israel deploys to exercise the effective control of an occupier, without the accompanying legal responsibilities or restraints. The denial of occupation enables Israel to employ massive amounts of military force in Gaza—a prerogative unavailable to occupiers, who are obligated to safeguard the welfare of occupied populations.

At the same time, Israel and its apologists use the denial of Palestinian sovereignty to delegitimise Palestinian force as non-state terrorism. The “hostile territory” and its occupants are accorded neither the powers and rights of the sovereign, nor the protections and rights of the occupied. Rather, they are expelled to a space of exception, as Lisa Hajjar and Mark LeVine write, “outside the reach of IHL [international humanitarian law] and thus open to any and all policies Israel may choose to impose, without fear of violating—at least according to Israel’s interpretations—international human rights and humanitarian norms”.

While Israel invokes the privileges of engaging in international armed conflict, such as imposition of a blockade, it denies Palestinians their corresponding entitlements under the same body of law. To exercise right without restriction, and to execute violence without vulnerability: this is the fundamental asymmetry of Israel’s colonial legal logic.

The colonial past, present, and future

Israel justifies its exceptional interpretation of international law by proclaiming that the situation in Gaza is sui generis: unique and unprecedented. However, as legal scholar Obiora Okafor warns, declarations of newness often disguise continuities with the imperial past. Israel’s interpretation of the laws of war resurrects the reasoning of European colonial powers, which used international law as an instrument to subjugate colonised peoples.

As our contemporary laws of war developed in Europe in the nineteenth and early twentieth centuries, colonisers denigrated the colonised as “savages” and “barbarians” to justify their ejection from the ambit of law. While the laws of war were applied to limit violence in conflicts between “civilised,” sovereign European states, and to protect occupied European populations, they were held inapplicable to wars against “uncivilised,” non-sovereign colonised subjects.

“The rules of International Law apply only to warfare between civilised nations, where both parties understand them and are prepared to carry them out,” the British military manual of 1907 stated. “They do not apply in wars with uncivilised States and tribes, where their place is taken by the discretion of the commander.” For as US Army lawyer Captain Elbridge Colby explained in a piece titled ‘How to Fight Savage Tribes,’ defending the bombing of Damascus by the French in 1925:

“It should be [a] clear understanding that this is a different kind of war, this which is waged by native tribes, that that which might be waged between advanced nations of western culture. Ferocity and ruthlessness are not essential; but it is essential to recognise the different character of the people”.

The war against “savage tribes” had to be total war: war in which the distinctions between combatants and non-combatants, permissible weapons and impermissible weapons, were dissolved. Unrestricted colonial violence was legitimated, while the violence of the “unicivilised” colonised in response to the colonial assault was rendered illegitimate. The colonised were subject to war, but not entitled to make war; subject to aggression, but not entitled to respond with force.

Unlike colonisers of previous centuries, Israel claims to apply international humanitarian law in its exercises of colonial violence. But Israel’s invocation of law only serves to place Palestinians outside its protection. From “savages” to “unlawful combatants,” from “barbarians” to “terrorists,” from “colony” to “hostile territory”—these are the spaces of exception reserved for those represented as non-sovereign and less human. The names on the map may have changed, but the colonial legal landscape is familiar.

Israel’s legal contortions are not simply violations of international humanitarian law, but an attempt to change it—-to fortify colonial structures of exception and exclusion. In the words of former senior Israeli military lawyer Daniel Reisner, “If you do something long enough, the world will accept it. International law progresses through violations”. Indeed, several of Israel’s legal innovations (or regressions, more accurately) have been adopted by the United States in its imperial “war on terror.” The colonial nature of Israel’s legal logic reflects the colonial nature of its project, and must be resisted as such.