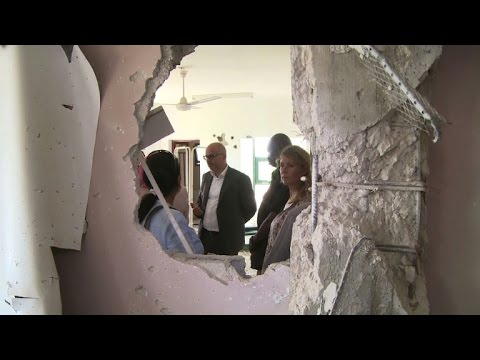 More than 150,000 people from around the world have today joined 35 aid, faith, development and human rights organizations in backing an unprecedented joint call urging world leaders to press the Israeli government to lift the blockade on Gaza and remove the restrictions on basic building materials needed to reconstruct the coastal strip.

With the number of people supporting the call increasing by the hour, this has quickly become the largest ever global public push to end the blockade on the Gaza Strip, with international organizations and the public petitioning world leaders to uphold promises made to rebuild Gaza one year ago.

On the anniversary of the end of the conflict between the government of Israel and Palestinian armed groups, the organizations are calling for construction materials like wood, steel bars and cement to be allowed into Gaza to end so that hospitals, schools and homes can be urgently rebuilt.

Last year’s conflict saw over 19,000 homes destroyed, and left 100,000 people homeless. Donor governments have pledged $3.5billion to rebuild Gaza, but a year on, Israeli restrictions on building materials continue to cause delays. Reconstruction has started on just over 2,000 of the 19,000 homes destroyed last year, and not a single home has been fully rebuilt.

Speaking in support of the campaign, Fadi Quran, Senior Campaigner of Avaaz said: “It’s outrageous that a year on from the last Gaza war, not one home has been totally rebuilt and the world has left families in the rubble. Governments are allowing Israel to violate the most basic humanitarian laws and since the start of the blockade there have been three wars with hundreds of children killed. This massive public outcry shows people everywhere want their governments to act now to end this illegal, inhumane and dangerous blockade.”

The campaign launched by the global citizens’ movement Avaaz and the organizations states: “By placing restrictions on the movement of people and goods, the blockade is punishing innocent civilians for acts for which they bear no responsibility. There can never be a justification for leaving families without a home and the sick without a hospital.”

Speaking from inside Gaza, Ibrahem El Shatali of Gaza City said: “Many of my friends and family members have been homeless for months now – how can we live like this, surrounded by rubble with no hope, no future and no prospect of things getting better? All we need are basic building materials and a fresh start.”

According to research carried out in a recent joint international NGO report, the illegal Israeli blockade has obstructed reconstruction efforts, worsening the humanitarian crisis inside the Gaza Strip:
• Only 5% of the urgently needed 6.7 million tons of reconstruction materials needed to repair what was destroyed last summer in Gaza have been allowed in one year since the ceasefire. At this rate, reconstruction could take 17 years.
• 559,000 students have been denied a quality education, as 11 schools and universities were totally destroyed and an additional 253 were severely damaged during the war.
• 120,000 people still do not have access to the water and sewage network, with slow repairs to the 35,000 meters of pipelines damaged or destroyed. The sewage situation in parts of Gaza is appalling, with overflowing lagoons and untreated waste running through the streets.
• 81 hospitals and clinics were damaged or destroyed by the conflict. Despite allocated funds to rebuild some of these facilities, needed construction material has not been allowed in.

Tony Laurance, CEO of Medical Aid for Palestinians said: “What Gaza needs more than anything is reconstruction, yet the government of Israel restricts the entry of even the most basic building materials. These severe restrictions prevent the rebuilding of even the most vital infrastructure in Gaza, including hospitals and clinics. People across the globe are now saying ‘enough is enough,’ and are urging global leaders to push Israel to end the blockade now.”

The government of Israel holds the primary responsibility to lift the blockade, although agencies signing on to the campaign also recognize that reconstruction is hindered by the failure of Palestinian political parties to reconcile and prioritize reconstruction, and by Egypt’s closure of its border with Gaza.

The government of Israel justifies the restrictions on security grounds. However, the United Nations and the International Committee of the Red Cross have repeatedly asserted that the blockade is a violation of international law. Indeed, there can never be justification for collective punishment of an entire population and leaving tens of thousands of families homeless and hundreds of thousands of children without a school or health centers.

William Bell, Christian Aid’s Policy and Advocacy Officer for Israel and the Palestinians said: “With sewage spewing onto pavements, electricity and water supplies still severely limited and schools that look more like bomb-sites than places children get an education, hope is dwindling and Gaza’s future looks bleak. The blockade has helped to create some of the highest unemployment and aid dependency levels in the world, making the lives of 1.8 million civilians miserable, and needs to end now.”

The full petition text supported by the organizations calls on the leaders of the US and EU, among others, to push for an end to the blockade and desperately needed building materials, including wood, aggregate, steel bar, and cement.

Oxfam link to the petition, where you can also sign up to be an Oxfam supporter.

The 35 organizations and 150,000 people referenced in this statement represent the numbers endorsing this action as of 12:01 PM UTC 25 August 2015. As support for this petition grows, you can continue to check the petition page for the full list of organizations and the number of people supporting the call. It will be updated regularly as our numbers grow by the hour.